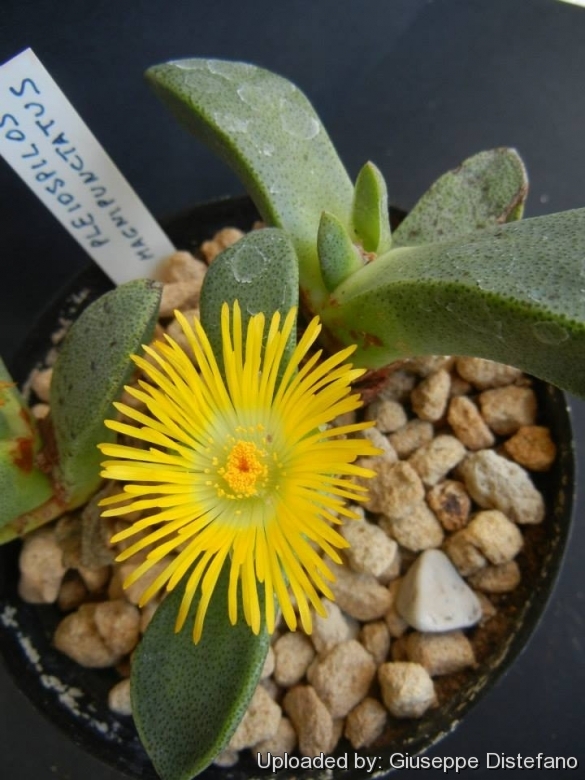 Description: Pleiospilos magnipunctatus is a local or morphological form of the very variable Pleiospilos compactus subs. canus. It distinguishes from the other canus for the narrower, somewhat thinner and longer leaves covered with dark green dots, however Pleiospilos magnipunctatus is not readily distinguishable from other similar firms, if not for the geographical provenance. It is a free-flowering species with showy daisy-like flowers that appear between the paired leaves in summer-autumn. It is a relatively common garden or pot plant.
Habit: It is a perennial mesemb species that forms rounded clusters of branches, each branch having 1-3 pairs of leaves. It may form small mats.
Leaves: Swollen or half-spherical, speckled 50-60 cm long 5-30 mm wide, very variable in shape, the lower surface keeled towards the trigonous tip, usually pale green or greyish green often flushed with pink, but heavily speckled with dark green dots.
Flowers: Mostly solitary, usually stalk-less though sometimes stalks to 8 mm. The typical subspecies has 10 ovary-cells in most flowers. Dark green, ring-shaped nectar glands surround the 9-15 thread-like stigmas.
Flowers: Petals more than 80, yellow or pale yellow with age petals wither and turn orange-pink in colour, remaining attached to the developing fruit. Stamens not papillose below.
Fruits (Capsules): Capsules with large tubercles. South Africa (Cape Province). The typical subspecies has shortly stalked capsules.
Blooming season: The large yellow flowers open in the afternoon in late summer-autumn. 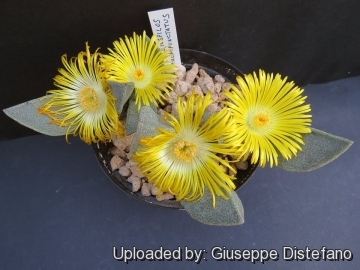