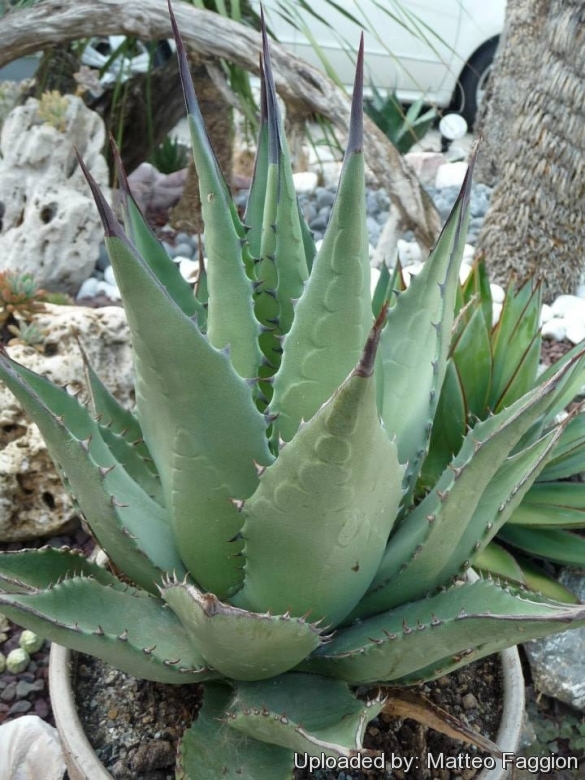 Origin and Habitat: Agave cerulata subs. nelsonii is restricted to the central Baja California (Mexico), at the north-western end of the range Near 30 °.
Habitat and ecology: This species grows on igneous highlands in the Mediterranean-climate Pacific coast area.

Description: Agave cerulata subs. nelsonii is a stemless, mat-forming agave distinguish from the standard species for having somewhat undulate to nearly entire leaves that are 25-40 cm long, 3-6 times as long as broad, and broadest near or below the middle (i.e., with a leaf morphology that approaches Agave shawii in that region).
Rosettes: 50-75 nm in diameter.
Leaves: Stiffly erect spreading, elongate-lanceolate or oblong-ovate, short-acuminate, (18-)20–35(-40) cm long, 6-8 cm, mostly 3 -6 times as long as broad, and broadest near or below the middle, flatly concave, smooth, mostly light grey to bluish-glaucous over green, margins undulate with small prominences or to nearly entire. Marginal teeth wide-triangular, slightly sinuous, usually curved up, dull brown, fragile, firmly attached or tending to break away, larger ones 3-9 mm long, frequently on small tubercles, 10-20 mm distant. Terminal spine straight, strongly subulate, dull grey or blackish, 2-4 cm long, 5 mm wide, very flat on the upper side and broadly furrowed up to the upper third ans decurrent at the margin. The young leaves of Agave nelsonii retain the imprint of their nascent spines.
Inflorescences: Ceriferous 3-8 metres tall, panicles, short and small, with 15 - 20 part-inflorescences with few ascending or upcurved peduncles, at the tip ternately branched.
Flowers: 40 to 50 mm long, light yellow. Pedicel c. 5 mm long.
Notes: Agave nelsonii Trel. has long been considered conspecific with Agave deserti (Shreve and Wiggins, 1964) and indeed is very similar in habit, in the gray glaucous leaves, and in other characters. However, the ceriferous inflorescence of A. nelsonii, the brown eyelets ringing the teeth, its chemistry and its geographic distribution relate it with the Agave cerulata complex, and it is now treated it as a subspecies of A. cerulata.

Subspecies, varieties, forms and cultivars of plants belonging to the Agave cerulata group

Cultivation and Propagation: They are usually cultivated outdoors in rock gardens, in cactus and succulent gardens, in Mediterranean-style landscapes, in borders, or as a specimen.
Growth rate: It is a relatively rapidly growing given the best conditions.
Exposure: They do well in full sun or a lightly shaded area with afternoon shade.
Soil: They do best in very well-drained, sandy or gravely soil. As an ornamental it is also grown in containers where it stays much smaller than its outdoor brethren. In pots they need a very porous mix soil (e.g. 2 parts peat moss to 1 part loam to 1 part of pumice).
Repotting: Use pot with good drainage.
Fertilization: They grows quickly if kept well nourished with a slow release fertilizer specifically formulated for cactus and succulents applied once or twice a year (poor in nitrogen), including all micro nutrients and trace elements.
Hardiness: Keep it in a cool, frost-free area in winter and put it out on the balcony or patio in summer. It grows fairly fast in summer if provided with copious water but allows to dry thoroughly before watering again. During the winter months, one should only water enough to keep the leaves from shriveling.
Scenography: These striking plants are wonderful when used for accent or simply to provide some all year round foliage and often used in a pot as a patio plant, can be moved around to change the scenery or position to give more shelter.
Traditional uses: Cochimí Indians of the central peninsula ate the stems, which contain a lower level of sapogenins than the leaves. The Seri made a beverage from the juice of macerated leaves.
Warning: It can get large, and it is armed with needle-sharp spines.
Propagation: Seeds or suckers which often are found growing around the base of the plant, Remove the basal suckers (if available) in spring or summer and let the cuttings dry for a few days before inserting in compost.