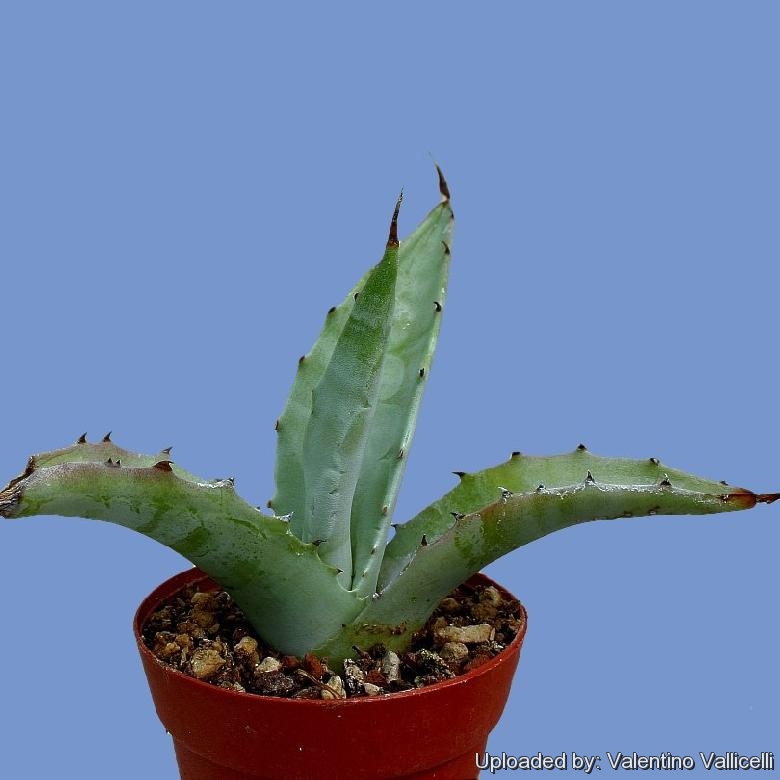 Origin and Habitat: Central portion of the Lower California peninsula.
Habitat: Rocky, rolling plains, and rocky slopes of hills on heavy-textured soil among volcanic or granitic rocks, from near the sea, where fog mitigate the arid climate, to inland where the conditions are warmer and dryer up to 900(-1300) above sea level. It is often found growing with Pachycormus discolor , Pachycereus pringlei, Fouquieria columnaris, and Yucca valida. Precipitation bi-seasonal mostly in winter and summer.
Type locality: The type specimen was collected at about 240 meters altitude at Calmalli.

Subspecies, varieties, forms and cultivars of plants belonging to the Agave cerulata group

Cultivation and Propagation: They are usually cultivated outdoors in rock gardens, in cactus and succulent gardens, in Mediterranean-style landscapes, in borders, or as a specimen.
Growth rate: It is a relatively rapidly growing given the best conditions.
Exposure: They do well in full sun or a lightly shaded area with afternoon shade.
Soil: They do best in very well-drained, sandy or gravely soil. As an ornamental it is also grown in containers where it stays much smaller than its outdoor brethren. In pots they need a very porous mix soil (e.g. 2 parts peat moss to 1 part loam to 1 part of pumice).
Repotting: Use pot with good drainage.
Fertilization: They grows quickly if kept well nourished with a slow release fertilizer specifically formulated for cactus and succulents applied once or twice a year (poor in nitrogen), including all micro nutrients and trace elements.
Hardiness: Keep it in a cool, frost-free area in winter and put it out on the balcony or patio in summer. It grows fairly fast in summer if provided with copious water but allows to dry thoroughly before watering again. During the winter months, one should only water enough to keep the leaves from shriveling.
Scenography: These striking plants are wonderful when used for accent or simply to provide some all year round foliage and often used in a pot as a patio plant, can be moved around to change the scenery or position to give more shelter.
Traditional uses: Cochimí Indians of the central peninsula ate the stems, which contain a lower level of sapogenins than the leaves. The Seri made a beverage from the juice of macerated leaves.
Warning: It can get large, and it is armed with needle-sharp spines.
Propagation: Seeds or suckers which often are found growing around the base of the plant, Remove the basal suckers (if available) in spring or summer and let the cuttings dry for a few days before inserting in compost.