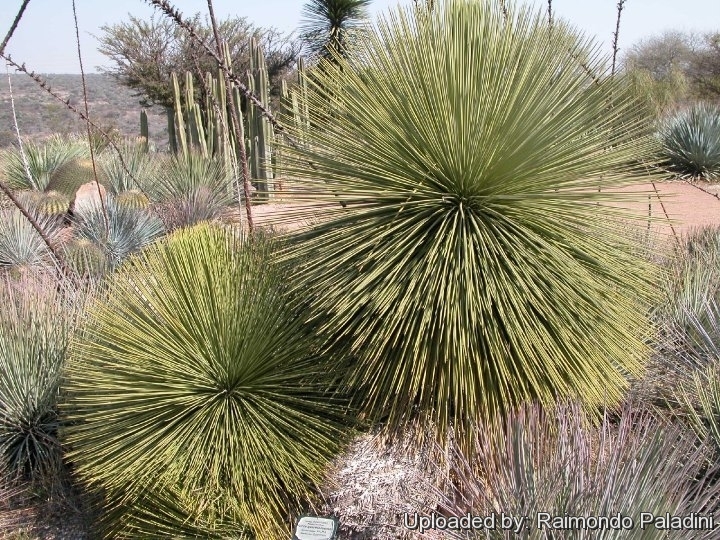 Origin and Habitat: Yucca queretaroensis is native to the Sierra Madre Occidental of the Mexican states of Querétaro, Guanajuato and Hidalgo. Due to its small population size, restricted distribution and habitat specificity, it is considered rare.
Altitude range: (800-)1000-1300(-1500) metres above sea level.
Habitat and ecology: It grows in a dry scrubland in small colonies on the steep slopes from in the gorges along the Rio Extorax, a tributary of the Rio Moctezuma. It has since been also found in deep gorges northeast of Zimapan in the state of Hildalgo. It grows together with Yucca filifera, Dasylirion longissimum, Agave stricta, Agave garcia-mendozae, Echinocactus platyacanthus, Jatropa dioica and Helietta parvifolia. It is poorly known, largely because of the rugged terrain of its native habitat. This species is threatened by modification, fragmentation and destruction of habitat by deforestation, fires, land use change, the leaves are used locally for construction and flowers are consumed as food, either raw or cooked.

Description: Yucca queretaroensis is a spectacular, single stemmed upright plant with a tall trunk up to 4 m high, with a large, prominent skirt of dead leaves hanging around the stem underneath the crown of living leaves. The tops of these trunks bear the bright green leaves that are very narrow, no more than 3 mm across, square in cross-section. Flowering stalks rise up to 1 m above the crown, bearing white flowers. Yucca queretaroensis is considered by many to be the most beautiful Yucca species.
Derivation of specific name: 'queretaroensis' For the occurrence in the Mexican state of Queretaro.
Stem: Single, cylindrical, generally unbranched, occasionally with up to 4 terminal rosettes, stout, upright 3-5 m tall, 20-25 cm in diameter, with old leaves lying flat in a neat skirt (diameter of skirt 40-60 cm). Older specimens may form small colony of 3-10(-30) individuals of different size from underground rhizomes.
Rosettes: Perfectly symmetrical consisting of up to 1500 leaves (exluding dr, persistent leaves on the trunk) radiating outwards like a rounded head of hair.
Leaves: Linear, rigid, straight, extremely narrow, 2-5 mm wide (basally enlarged up to 15-2-5 mm) and 40-60(-115) cm long, surface pale to opaque green, powdery, smooth to the touch, square in cross section, stiff and pointed, convex on both surfaces with a slight keel and two furrows between keel and margins. Margins cartilaginous yellowish finely denticulate. Terminal spine, dark brown to 5-15 mm long.
Inflorescence (panicle): Arising from amongst the leaves to 60-80(-100) cm long, ovate, erect, highly branched. The floral portion is composed by 120-140 branches, erect and extends for about 90% of the length of the inflorescence. The branches are 14-16 cm long (progressively reduced toward apex), with 4-10 flowers per twig, covered with thin white tomentum. Stalk 4-5(-7) in diameter.
Flowers: 1.5-3,6 cm long, bell-shaped to globose, penduluos, creamy-white. Pedicels tomentose 1-2(-3.2) cm long. Perianth segments free, dimorphic, Outer segments 28-36 mm long by 10-12 mm lanceolate, obtuse or truncated at apex, glabrous. Inner segments 23-30 mm long, 12-14 mm wide, lanceolate to narrowly elliptical, acuminate, sub-equal. Stamens united only at the base of perianth. Filaments 13-15 mm long. Anthers 2-3 mm long. Ovary superior, 17 mm long, 6-8 mm in diameter, closely elliptical and tapered towards the style, pale green. Style cylindrical, stigma lobed with three retuse lobes.
Fruits (capsules): 7-10(-11.5) cm long, 2.5-4(-4.5) cm wide, cylindrical, fleshy, indehiscent, pendulous, green.
Seeds: Black, 6-9(-11) mm long, 5-10 mm wide, 2-3 mm thick, different in shape more or less triangular or flattened depending on their location in the fruit.
Phenology: The plants bloom from April to June, fruit mature in December.
Taxonomy notes: This species belongs to the group of rupicolae that is most closely related to such familiar species as Yucca rostrata, Yucca glauca, Yucca rigida and the similar looking Yucca thompsoniana, which has wider flat leaves, shorter often branched stems, and Yucca linearifolia from which it primarily differs in having a heavier trunk and square leaves in cross section (Y. linearifolia are about as wide but flat). 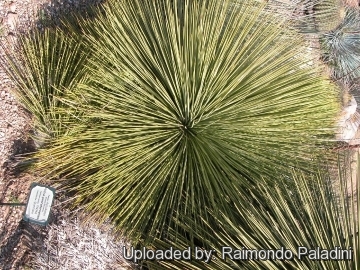 Yucca queretaroensis Photo by: Raimondo Paladini
Send a photo of this plant.

Cultivation and Propagation: Yucca queretaroensis is a slow growing, carefree and durable plant admired for its spherical form and fine texture and has become one of the most sought after of the woody lilies. It is among the yucca species that form a trunk with age and won't be passed over by anyone with an appreciation for sculptural plants. This species is highly tolerant of drought, frost and heat. Though the tip of this plant is fairly sharp the lack of stiffness in the leaves makes this plant less dangerous than most others of the genus.
Soil: Plant in very fast draining soil. It is adapted to a hot, dry environment, but has some tolerance to moisture and humidity when planted in a very well-draining soil. It is noted as preferring alkaline conditions.
Waterings: Provide little or no water in winter. Treat like a succulent. However, they grow faster if watered well (don't water the crown, though they rot easily). In the garden they should be placed in a sunny, well-drained area with additional summer water in dry climates.
Exposure: They thrive best in full sun, but can be grown with some shade and humidity, but may become leggy.
Uses: These make great specimen plants for xeriscape gardens and blend well in either tropical or arid gardens. Small plants are relatively inexpensive, but larger ones are a fortune. These make excellent potted specimens, and their symmetrical form provides a striking focal point, ans display wonderful shadows when illuminated by night lighting. In cooler climates they thrive well in gravel garden, as they have proven quite hardy because of the excellent drainage.
Hardiness. Best where winter temperatures stay above 0° C, but is hardy to around -8° C. Plants in containers can be moved inside during longer cold spells.
Maintenance: When the trunk is pruned of the older, lower leaves, the remaining leaf bases create a beautiful symmetrical spiral leaf-base pattern.
Propagation: Easy to propagate from seeds or suckers (If available).