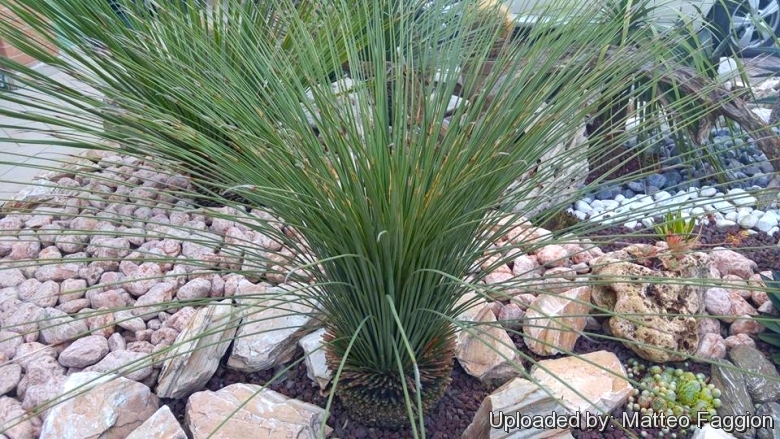 Dasylirion longissimum Photo by: Matteo Faggion
This is one the most dazzling of the Dasylirions, most resembling the genus Xanthorea, the grass trees of Australia. It is an extremely graceful and very symmetric plant forming a shimmering orb of fine grassy leaves that tremble beautifully in the slightest breeze.

Origin and Habitat: Fairly limited in range in northeastern Mexico

Description: The Toothless Sotol (Dasylirion longissimum syn: Dasylirion quadrangularis) is a slow growing durable evergreen shrub that looks like a miniature palm with a large fountain-like clump of very stiff grassy leaves, eventually forming (after many many years) a solitary trunk , most resembling the genus Xanthorea, the grass trees of Australia. (completely unrelated, though) Even the flower spikes look similar. This appearance makes it very easy to identify. Withstanding intense drought, they can live more than 150 years. It is possibly the most beautiful “sotol”.
Trunk: Solitary, large, woody, felted with old leaves, 90-200 (or more) cm tall, but occasionally old plants may develop multiple heads of leaves, typically branching after flowering.
Leaves: Very numerous (The crown of mature plants is composed of hundreds of leaves), stiff, grass like, leathery, with smooth edges, spreading symmetrically in all directions from the trunk to form a more or less rounded rosette 1.5-2.5 cm wide. They are dull greys green to glaucous-green, larger at the base and narrowing farther out on the leaf. (usually less than 6 mm wide) quadrangular in cross section (the upper and lower surfaces raised to low keels), completely unarmed, with smooth or slightly rough margins with no distinct teeth and long (the more shade it's in, the longer the leaves), apex entire lacking the frayed tips that are common in this genus. They can stretch up to 90-180 cm. Older leaves droop around the base, forming a shaggy mantle that collects water and provides support. But in cultivation the bottom leaves can be trimmed exposing an ornamental symmetrical spiral leaf-base pattern that never fails to attract comments.
Inflorescence: Plants dioecious. It forms a 2-3(-5) m tall spike of which the top 1/3-1/4 is the flowering section which is composed of a large number of racemes which occur within the bracts.
Flowers: Small very numerous (hundreds), white, tan, cream or brownish-yellow that emerge from reddish buds.
Blooming season: They may go years without blooming, then send up the tall flower stalk in summer.
Fruits: If successfully fertilized, will produce a colourful red-pink plume of tightly packed seeds in autumn. Fruit are dry, indehiscent, 3 winged, 7-9 mm long, scarcely notched with a single seed.
Chromosome number: 2n = 38, with three pairs of long chromosomes nearly twice the length of the shorter.

Notes: There is a lot of confusion today surrounding the names Dasylirion longissimum Lemaire (1856) and Dasylirion quadrangulatum Watson (1859) and it seems that they are one in the same. In the Illustrated Handbook of Succulent Plants: Monocotyledons edited by Urs Eggli (2001), the contributor for this section, Dr Colin Walker, lists D. longissimum as the correct name with D. quadrangulatum as a synonym, but other think that they are two different species. D. quadrangulatum comes from northeast Mexico in the Tamaulipas/Nuevo Leon area, this is the plant that is normally seen in cultivation. On the other hand D. longissimum is an uncommon plant from central Mexico and the two species don't overlap as there is a considerable space between the two. D. longissimum are smaller, greyer, much untidy in overall appearance with some variation in their inflorescences. One way to distinguish between them is to feel the leaf margins right down at the base where they start to flare out and form the 'spoon' - D. longissimum has residual little marginal teeth whereas D. quadrangulatum has smooth leaf margins. So this marginal teeth is the only really diagnostic feature of D. quadrangulatum. 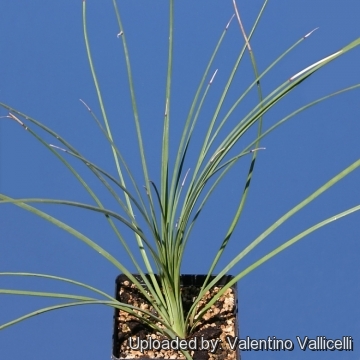 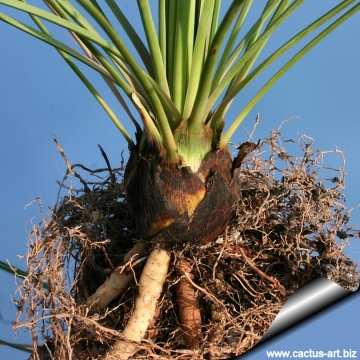 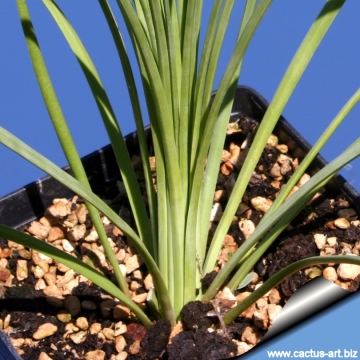 Dasylirion longissimum Photo by: Cactus Art
Send a photo of this plant.

Cultivation and Propagation: Dasylirion longissimum are slow growing, carefree and durable plant. This species is highly tolerant of drought and heat.
Waterings: Provide little or no water in winter. Treat like a succulent. However, they grow faster if watered well (don't water the crown, though they rot easily). In the garden they should be placed in a sunny, well-drained area with additional summer water in dry climates.
Exposure: They thrive best in full sun, but can be grown with some shade and humidity, but may become leggy.
Uses: These make great specimen plants for xeriscape gardens and blend well in either tropical or arid gardens. Small plants are relatively inexpensive, but larger ones are a fortune. These make excellent potted specimens, and their symmetrical form provides a striking focal point, ans display wonderful shadows when illuminated by night lighting.
Soil: Plant in very fast draining soil. It is adapted to a hot, dry environment, but has some tolerance to moisture and humidity when planted in a very well-draining soil.
Hardiness. Best where winter temperatures stay above 10° C, but can take some periods of frost (cold hardy to at least -10 ° C). Plants in containers can be moved inside during longer cold spells.
Maintenance: When the trunk is pruned of the older, lower leaves, the remaining leaf bases create a beautiful symmetrical spiral leaf-base pattern.
Propagation: Easy to propagate from seeds or cuttings (If available).