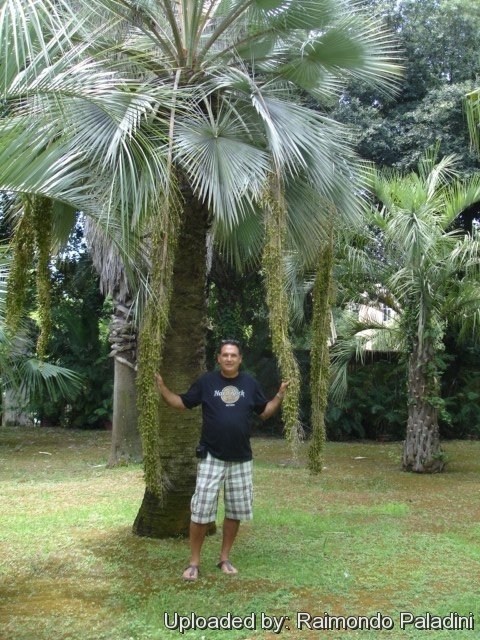 Origin and Habitat: Brahea armata is endemic to Northwestern Mexico (Baja California and Isla Angel de la Guarda in the gulf of California, Sonora), and widely planted as an ornamental
Habitat: It is widespread and locally common in arroyos, canyons bottoms and cliffs on rocky soils among white granite boulders, at low to medium elevations or in rock crevices at higher elevations. It is sometimes found with Washingtonia filifera or Washingtonia robusta. In view of the fact that the palms are found primarily along watercourses they are well adapted to periodic flooding of their natural habitats and are particularly frequent especially in small drainages having less erosive power. These shallow-rooted palms, however, are easily uprooted by intense flash floods and are generally absent from canyons subject to high runoff. This is the most widespread endemic palm of the northern California peninsula and has its counterpart in Brahea brandegeei, endemic to the southern Californa peninsula.
Ecology: The oases of Washingionia filifera and Brahea armata are often subject to periodical fires. Both palm species survive to fire and establish new canopy from preexisting meristems. The palms are more fire tolerant than understory species. Fire opens understory, promotes seedling establishment, and enhances the subsurface water supply, reducing competition for water.

Description: Brahea armata is a beautiful fan palm with some of the bluest fronds in the world, it is very attractive especially when young.
Stems: Solitary, broad, lightly swollen at the base, stout, up to 15 m tall and 45 cm diameter, waxy covered with dark curved thorns and with persistent leaf bases, but very old trunks become bare and appears ringed with leaf-scars.
Crown: With approx. 25-30 leaves, rather dense, rounded.
Leaves: 1-1,5(-2) m long distinctly bluish green; petiole about one metre long with curved, sometimes bifid thorns along margins; blade divided to about the middle in 40-60 rigid leaflets which can range from pastel bluish white or silver-blue to aquamarine in color. The leaves are persistent in nature, forming a shag around the trunk; in cultivation they are typically burned or cut off.
Inflorescences: Numerous, arching, extending abundantly out beyond the crown, reaching 1 to 5 meters in length and nearly reach the ground in young specimens.
Flowers: Small, fragrant and inconspicuous. Flowers are bisexual, male and female flowers are on the same inflorescence. The Blue Hesper Palm flowers are considered to be one of the most beautiful of palm flowers.
Blooming season: Late winter to early spring. Young plants only one meter tall may flower.
Fruits: Almost globose to ovoid, 18-24 mm in diameter, brownish black and slightly fleshy at maturity. The fruit mature soon after plants flower and have a single seed inside.
Remarks: It is often mistaken for Washingtonia, which differs in its green foliage and in its usually pendulous leaflet tips. Brahea brandegeei is also very similar but differs in its leaves, which are green on the upper surface, and inflorescences, which are shorter than its leaves.

Cultivation and Propagation: Brahea armata is commonly available at nurseries and is is one of the most widely grown palms in subtropical climates and planted in gardens and parks. It is adapted to a Mediterranean climate with cool, moist winters and summer drought, and can grow on poor and rocky soils. Specimens outside of Mediterranean climates do not grow as large, rarely exceeding 10 metres. This palm is adapts to most soils, is easy to grow and transplant, is very hardy and tolerating neglects.
Growth Rate: Slow.
Soil: It is very adaptable to many kinds of well drained soils: clay; sand; loam; acidic to alkaline. It can even grow in very alkaline soils.
Fertilization: It respond very well to fertilizer and need a perfect fertilizer diet including all micro nutrients and trace elements or slow release fertilizer applied during the growing season, or according to package directions, using a fertilizer specifically formulated for palms. As with other palms, potassium and magnesium deficiencies may occur and mineral supplements should be administered in recommended amounts to prevent or treat such deficiencies.
Water Requirements: It tolerates low levels of humidity and summer drought, though it prefers evenly moist but not consistently wet medium. When supplied with adequate moisture and fertilizer it is also fairly fast growing. This palm is very drought tolerant once established. It dislikes soggy or over-irrigated soils because it frequently develops trunk or root rot. Growers obtain best growth by applying occasional deep irrigation.
Light: It prefers bright sunny locations and even quite small specimens will thrive in full sun, but it also does well in part shade with some direct sunlight.
Aerosol salt tolerance: It is somewhat salt resistant and may be grown near the sea if given some protection (behind a dune, building, etc.)
Wind resistance: It endures drying winds.
Hardiness: These palms are some of the hardier palms ( USDA Zones 8B-11) They will survive temperatures of −10 °C with minor damage, and established plants have survived, with severe damage to the foliage, brief periods of temperatures as low as −12 °C. Palms in fast-draining soil are more cold hardy. During the winter, leaves may become temporarily discoloured by damp cold and frost.
Roots: Usually not a problem.
Breakage: Resistant.
Maintenance: For the healthiest and most attractive plant, keep the palm pruned. As the old fronds die, these should be trimmed off and the leaf bases allowed to dry out, but do not prune if the frond still has some green colour. Palms recycle nutrients from dead or dying fronds and use them for healthier fronds.
Pest and diseases: It is quite resistant to pests/diseases and is quite resistant to lethal yellowing disease.
Uses: This stunning palm would be a great focal point for any landscape. It is used in gardening and landscaping in many parts of the world though in sheltered areas it will survive prolonged periods below freezing point. Plant it outdoors in a site that can accommodate the large head of leaves, and is not directly under power lines or other structures. Use the Blue California fan palm in natural and formal groupings and in large open areas. It is particularly adapted for street without pavement, avenue and parkland planting where it typically is spaced about 7-9 m apart. It is also excellent in containers and urns. And thanks to its drought resistance and durability to heat it can thrive in harsh urban conditions. This palm tree does very well in a pot and can grow indoors.
Warning: The dead fronds are known to be a fire hazard and a popular bedding roost for rodents and, because of this, must be removed.
Food uses: The Cocopah people ate the relatively large fruits fresh or dried for future use. They also ate the seeds after pit-roasting them to remove any bitterness.
Propagation: By seed. They germinated in 3-5 month.