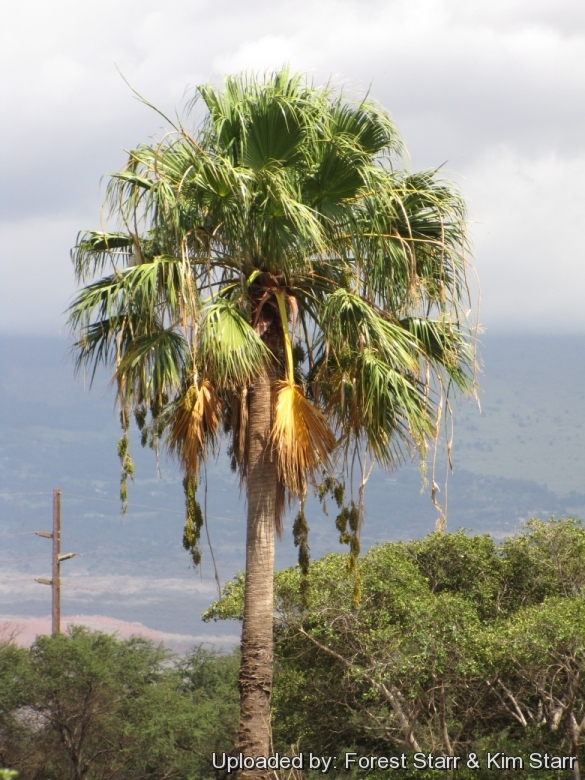 Origin and Habitat: Mexico (Sonora and Baja California Sur), naturalized and widely cultivated in South United state (California, Florida and Arizona) in areas where it is hardy throughout the world.
Habitat: This palm is native to the desert mountain valleys, canyons and washes where underground water is continuously available. It is naturalized in disturbed areas with moderate rainfall.

Description: Washingtonia robusta is a massive and majestic palm, easily recognized through its characteristics solid trunk and crown and one of the most widespread of all ornamental plants. It is relative to Washingtonia filifera and can hybridize with it.
Trunk: Solitary, more slender than Washingtonia filifera, usually less than 25 m tall, but soaring up to 30 m in ideal moisture and microclimate conditions and 25-50 cm in diameter, bulging at the ground and becoming slender as it approaches to the crown, grey, ringed with closely set leaf scars although, usually at least part of the trunk, remains covered with dead fronds that remain attached and drop down to cloak the trunk in a wide continuous thatch called a “shag” from the crown all the way to the ground, giving it the common name of Petticoat Palm.
Roots: Fibrous and shallow.
Crown: The canopy is round, symmetrical, loose and open with up to 30 laves (fronds), with a spread of 4,5 m.
Laves(fronds): Alternate, evergreen, costapalmate (fan-shaped) approx 150 cm long and 120 cm across with gracefully drooping leaflet tips; leaflets lanceolate, rich glossy green, 1 metres long, margin entire with long thread-like white cotton-like fibres, between the segments persisting even when the palm is mature. The individual leaflets are pendulous and swing freely in the wind; leaf stems (petiole) about 90-100 cm long, orange, armed along the margins with vicious sawtooth thorns. The leaf-stalks forms a characteristic criss-cross pattern unless removed.
Flowers: The large branched inflorescence extend past the leaves and is 2-3 m long, and holds clusters with numerous small light beige to pale orange-pink flowers. Flowers are bisexual. Ovary 3-lobed.
Blooming season: Late spring to early summer
Fruit: Spherical, blue-black drupe, 6–8 mm diameter; it is edible, though thin-fleshed.
Chromosome number: 2n = 36.

Notes: Washingtonia robusta and Washingtonia filifera are closely related and quite similar. They differ in subtle characteristics, and even palm experts have trouble telling them apart. As a general rule the California Washingtonia (Washingtonia filifera) is very similar but has a stockier, more massive and shorter trunk and is said to be more cold tolerant. The name “robusta” is used because this species grows more rapidly in height than Washingtonia filifera. And also W. robusta lacks the persistent cottony threads on the fronds, from which W. filfera earns the common name 'Cotton palm'. 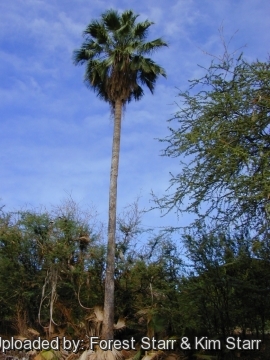 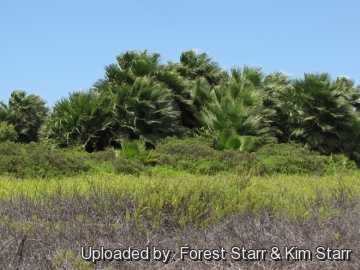 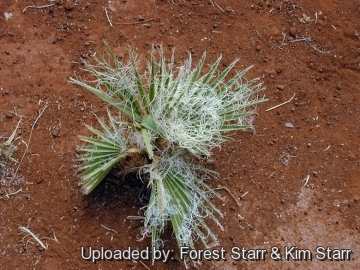 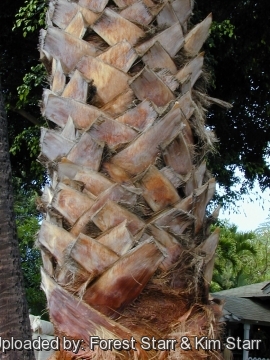 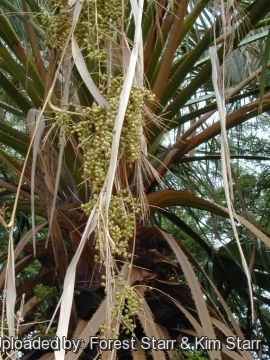 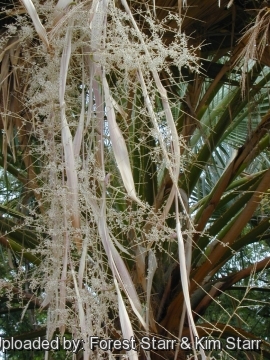 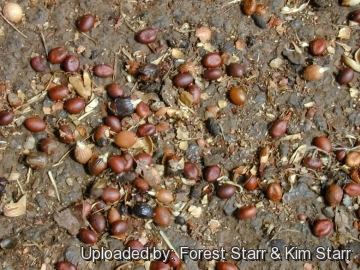 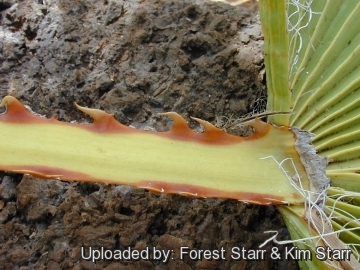 Cultivation and Propagation: It is a widely grown palms in subtropical climates and a very conspicuous feature of street and ornamental planting in southern California. It is adapted to a Mediterranean climate with cool, moist winters and summer drought. Specimens outside of Mediterranean climates do not grow as large, rarely exceeding 15 metres. This palm is inexpensive, adapts to most soils, is easy to grow and transplant, is very hardy and tolerating neglects.
Soil: It is very adaptable to many kinds of well drained soils: clay; sand; loam; acidic to alkaline. It can even grow in extreme alkaline soils that have a pH as high as 9.2.
Fertilization: It respond very well to fertilizer and need a perfect fertilizer diet including all micro nutrients and trace elements or slow release fertilizer applied during the growing season, or according to package directions, using a fertilizer specifically formulated for palms. As with other palms, potassium and magnesium deficiencies may occur and mineral supplements should be administered in recommended amounts to prevent or treat such deficiencies.
Water Requirements: It tolerates low levels of humidity and summer drought, though it prefers evenly moist but not consistently wet medium. When supplied with adequate moisture and fertilizer it is also fairly fast growing. This palm is very drought tolerant once established. It dislikes soggy or over-irrigated soils because it frequently develops trunk or root rot.
Light: It prefers bright sunny locations and even quite small specimens will thrive in full sun, but it also does well in part shade with some direct sunlight.
Aerosol salt tolerance: It is somewhat salt resistant and may be grown near the sea if given some protection (behind a dune, building, etc.)
Wind resistance: It endures drying winds.
Hardiness: These palms are some of the hardier palms, but somewhat less cold hardy than the California Washingtonia, hardy to about ?7 °C ( USDA Zones 9-11) and established plants have survived, with severe damage to the foliage, brief periods of temperatures as low as ?10 °C. Palms in fast-draining soil are more cold hardy. During the winter, leaves may become temporarily discoloured by damp cold and frost.
Roots: Usually not a problem.
Breakage: resistant.
Transplant: Even large California fan palms can be successfully transplanted.
Maintenance: For the healthiest and most attractive plant, keep the palm pruned. The dead fronds are known to be a fire hazard and a popular bedding roost for rodents and, because of this, must be removed, but in humid and windy climates this is not such a problem as the high winds tend to keep the palms skirt-free. As the old fronds die, these should be trimmed off and the leaf bases allowed to dry out, but do not prune if the frond still has some green colour. Palms recycle nutrients from dead or dying fronds and use them for healthier fronds.
Fruit characteristics: does not attract wildlife; not showy; fruit/leaves not a litter problem.
Pest and diseases: It is quite resistant to pests/diseases and is quite resistant to lethal yellowing disease.
Uses: It is used massively in gardening and landscaping in many parts of the world though in sheltered areas it will survive prolonged periods below freezing point. Plant it outdoors in a site that can accommodate the large head of leaves, and is not directly under power lines or other structures. Use the Mexican fan palm in natural and formal groupings and in large open areas.
It is a striking sight when planted at equal intervals along a boulevard, street without pavement, avenue and parkland planting where it typically is spaced about 9 m apart or when snuggled up in groups against high rise building. It is also excellent in containers and urns. And thanks to its drought resistance and durability to heat it can thrive in harsh urban conditions.
Traditional uses: The fruit of the fan palm was used by Native Americans. It was eaten raw, cooked, or ground into flour for cakes. The Cahuilla and related tribes used the leaves to make sandals, thatch roofs, and for making baskets.
Propagation: By seed. They germinated in less than within 2 months. The seeds are reported to germinate well. Germination is considered so easy that young plants may become weeds under mature palms.