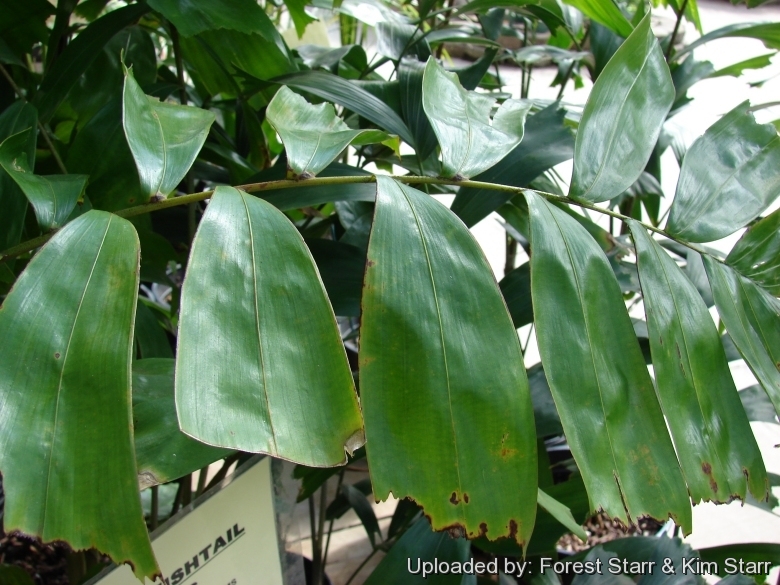 Description: Drymophloeus beguinii is a small to medium-sized palm clustering with small crown, reaching up to 5 m. tall. It is popular for its attractive foliage. It is indeed quite variable and like most understory palms, individuals of these species vary in terms of leaf size, width and texture, even when the floral and fruit characters are uniform.
Remarks: Drymophloeus beguinii and Drymophloeus litigiosus are very similar (if not the same) and it is hard to tell apart one from the others, if not for the geographical provenance. In accordance with the variability of the species the “beguinii” variety is invalid and nowadays considered as a synonym of Drymophloeus litigiosus.
Stem: Single stemmed (but one population of suckering individuals is known from western New Guinea), usually less than 3 m tall and 2-7 cm in diameter.
Crown: Up to 1,8 m in diameter, with 5 to 7 leaves.
Leaves: Pinnate, varied from narrow to wide, glabrous to pubescent, small to large, and almost rubbery texture The terminal segments are cleft apically and not united to form a single fan-shaped segment like in the related Drymophloeus oliviformis. Leaflets broad, dark green, with premorse leaf tips.
Inflorescence: Sparsely branched with several long, thin rachillae, often covered with brown scaly hairs. Flowers white. Plants may flower at a small size.
Fruit: Bright red slow to mature.
Seed: The endosperm of the seed is ruminate.

Subspecies, varieties, forms and cultivars of plants belonging to the Drymophloeus litigiosus group

Cultivation and Propagation: This beautiful palm is often grown in tropical regions for its foliage. It is a relatively slow-growing plant and needs high humidity, well-drained soil, and is not tolerant of drought or wind. It's definitely worth an effort to grow this beauty! It lives also well under home conditions.
Soil requirements: It prefers rich, loamy, slightly acidic, soils with good organic content except those that are constantly soggy.
Watering: It require plenty of water at all times. However, standing water or "soggy" soils can lead to rot and should be avoided. Drought tolerance low.
Light: It adapts well to part shade or light shade. If home-grown, this palm will require a good overhead light.
Nutrition requirements: Moderate, responds to fertilization, it need a perfect fertilizer diet including all micro nutrients and trace elements. Micronutrient deficiencies are occasional problems. Micronutrient deficiencies only show up on soil with a high pH.
Aerosol salt tolerance: Not tolerant.
Hardiness: This palm is cold sensitive and need tropical or subtropical climates. (USDA 10B-11 ). Light damage to death at -3°C, only slight damage at 0°C.
Wind hardiness: It cannot tolerate sweltering heat and windy conditions.
Maintenance: Prune diseased, damaged or drying fronds, but do not prune if the frond still has some green colour. Palms recycle nutrients from dead or dying fronds and use them for healthier fronds. Palms only have a set number of new leaves that can sprout and grow per year and removing fronds will not increase that number. If you cut off more than what will grow annually, you could be left with a pretty bare and bald Palm.
Ornamental uses: It is grown as an ornamental understory palm It also makes a great potted specimen for a shaded patio or inside.
Traditional uses: The black wood was used for making spears.
Warning: Seed coat irritating.
Disease & Pests: This palm is resistant to major pests and diseases, but may require protection against scale insects, cold weather and spider mites.
Propagation: Seeds.