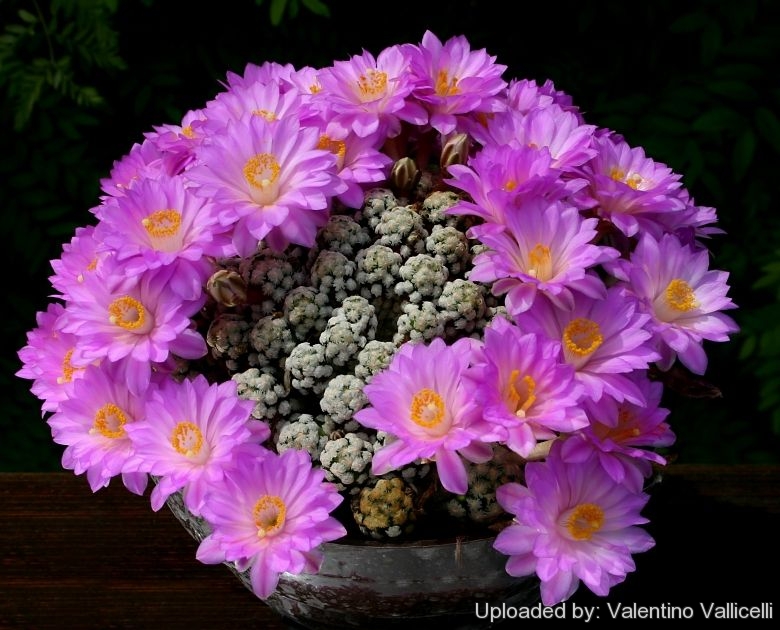 Mammillaria theresae Photo by: Valentino Vallicelli
This is one of the most sought-after and very distinctive species of Mammillaria, this little species is immediately recognisable by its spination even when not in flower.

Origin and Habitat: Mammillaria theresae is endemic to the Mexican state of Durango in the Corneto Pass area, (West Sierra Madre) where it is found only at its type locality (the extent of occurrence is possibly as low as 25 km²). The population is small, certainly not much more than 200 mature individuals individuals.
Altitude range: 2,150 to 2,300 metres above sea level.
Habitat and ecology: This species grows mainly in moss patches over limestone rock formations on the eastern slopes of the Coneto Mountains, in grassland with nearby pine-oak forest.. The mountainous habitat is characterized by serious temperature fluctuation. This cactus is popular with collectors as an ornamental plant. The species has been seized in Mexico and the Netherlands. Illegal collection and road construction pose serious threats to this species.

Description: Mammillaria theresae is a small geophyte, usually single headed, though some specimens offset in age. This is a very distinctive little species that was discovered in the late 1960s. When it came into cultivation, it caused quite a sensation because of its peculiar long-tubed blossoms and the spines are very decorative: all radial, translucent white, plumose, forming little clumps, which needs to viewed under a lens to be appreciated. They look like furry little starfish. This species puts out a good amount of growth each year, but the individual stems seem to grow no larger, as the old growth tends to compact at the base. Plants bloom when still tiny (less than 2 cm tall), the bright magenta flowers of 5 cm in length often obscuring the plant. This will no doubt be one of the most talked about little cacti of all time.
Stem: Subglobose to cylindrical, olive green, with magenta-red tint, up to 4(-5) cm high, 1-3 cm in diameter. Without latex.
Tubercles: Small, cylindrical/conical.
Radial spines: 22-30, plumose, pinnated, translucent, white to yellowish white, up to 2 mm long, forming little spines clusters.
Central spines: Absent.
Roots: Strong taproot
Flowers: Crocus-like, funnelform, pink, unusually long-stemmed for a Mammillaria (3.5 cm in diameter and up to 5 cm long), that are many times larger than the plant body itself, at least with plants on their own roots. Stigmas pale yellow.
Fruit: Cryptocarpic, stays retained within the body at the axil for many years. Club shaped, up to 10 mm long.
Blossoming time: Mainly in may, but also sporadically though out summer.
Remarks: Cryptocarpic fruit: Mammillaria theresae is one of the few species of cactus with cryptocarpic fruits. That is, the fruit and seeds are produced and retained inside the stem of the plant. After the flower is finished and dropped off, the stem closes over the fruit and the fruit/seed gradually ripens within. The following years the fruit may remain within the body at the axil, or may protrude a bit. A thin membrane will be above the part where ripe seed can emerge. As the plant swells with the new growing season, the membrane fractures, and some seed from the past years can little by little drop down and germinate in the close proximity, forming small colonies. But usually the seeds remain within the plant body for several years or for the whole life cycle of the plant, and frequently they will be released only at the death of the plant after the disintegration of the old stem.
It is possible to collect fruit and seeds only by means of a thin pointed forceps. The seeds' vitality lasts for many years and moreover seeds contain inhibitors that preserve them from premature germination. Generally fresh seeds won’t germinate very well, only old seeds do. The complete germination of this kind of seed may take several years (Some will sprout unexpectedly after 5 or 8 years!). Because of the above peculiarity, seeds and plants of cryptocarpi Mammillaria (Series Longiflorae) are seldom available from commercial sources.
Similar species: Mammillaria theresae is one of a number of similar species, all discovered in the 1960s, the others being Mammillaria saboe, Mammillaria haudeana, and Mammillaria goldii. Mammillaria theresae was first described in 1967.

Notes: Seasonal growth and contraction: In the wild these plants contract considerably during the dry season, sometimes pulling down completely under the soil level, and frequently the flowers push up through the dirt from the underground cactus body. In fact, even though these plants show a good amount of new growth each year (at least two or three cm), they hardly get any larger, and their dimensions remain unvaried year after year, as the individual stems tend to contract at the base. The new growth produced during the vegetative season compacts considerably and retracts sometime, pulling the plant down completely under the soil in the hottest months of summer and coldest months of winter.
It should be noted that "when specimens are in this withdrawn state, it becomes almost impossible to find them in their natural state, even though their exact locality is known" 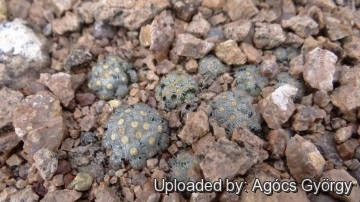 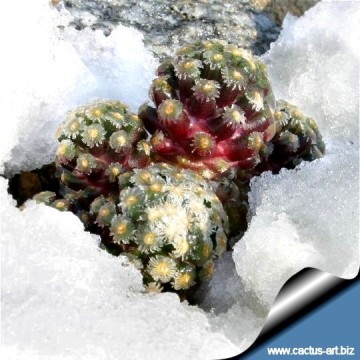 Outdoors under the snow. Yes, this species is very hardy and can be also grown in rock gardens. Photo by: Cactus Art 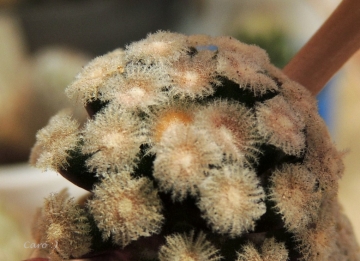 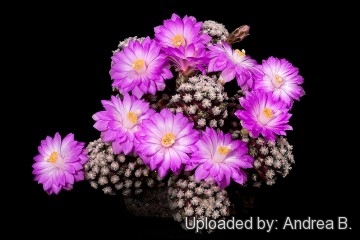 Mammillaria theresae Photo by: Andrea B. 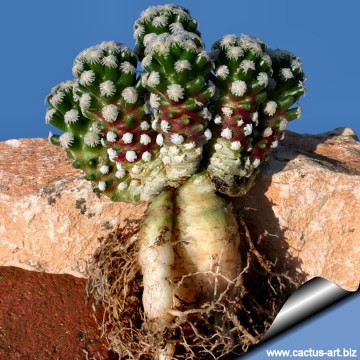 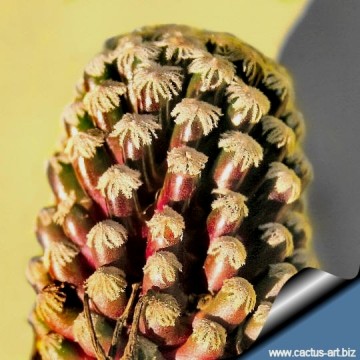 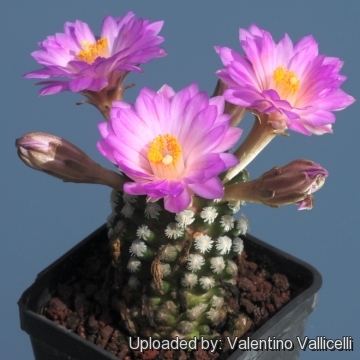 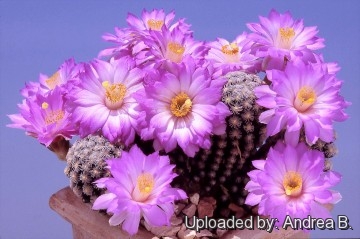 The small fruits are retained within the body so it is necessary to dig them out to collect the few seeds they contain. Photo by: Andrea B.

Cultivation and Propagation: Mammillaria theresae - like the other Mammillarias of the saboae group - is not the easiest of Mammillarias to grow and keep, this is though it is easier than some of its relatives such as M. goldii. But all this species require similar growing conditions, and a mineral-based potting mix is preferred. They need to be kept dry in winter.
Pot plants are quite wet-sensitive. Care must be taken with watering, and it needs good drainage. Water sparingly during the growing season; keep very dry in winter. But plants grown outdoors seems to tolerate easily the winter wetness. Usually it is recommended to overwinter this plant in a bright and warm greenhouse with at least 8-10° C , but it has proved to be quite frost resistant and has demonstrated to survive safely outdoors under a cover of snow at a temperatures of -15° C. Sun Exposure: Full sun - Light shade.
Propagation: Seeds, cuttings or grafting. Germination of the seed can still prove to be a challenge.

by Valentino Vallicelli
There are a total of 20 Photos.
Click here to view them all!
Cite this page: "Mammillaria theresae" Text available under a CC-BY-SA Creative Commons Attribution License. www.llifle.com 14 Nov. 2005. 28 Nov 2022. </Encyclopedia/CACTI/Family/Cactaceae/9674/Mammillaria_theresae>