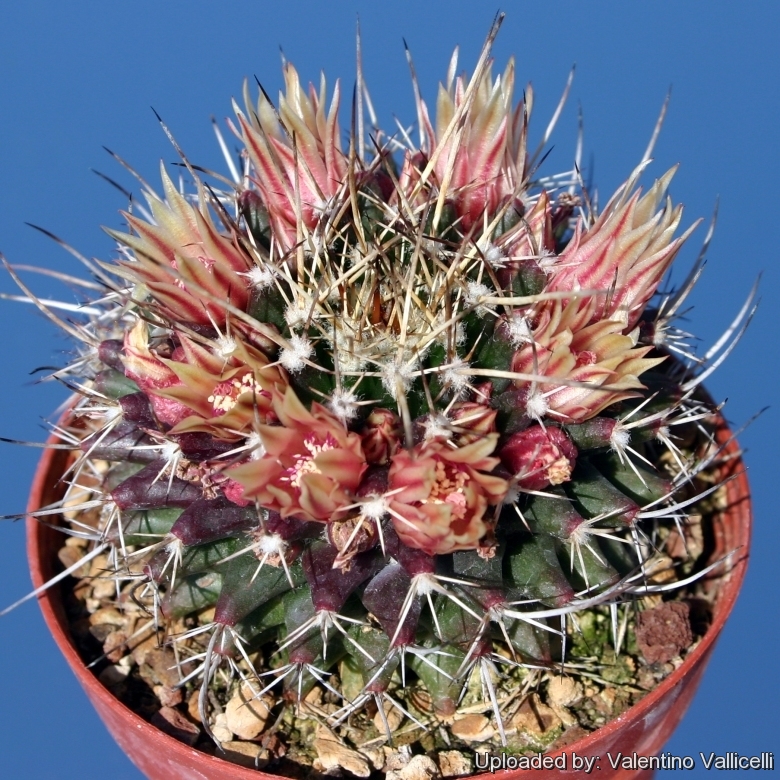 Origin and Habitat: Mexico, Queretaro and the border of San Luis Potosi, near Arroyo Seco.
Altitude: 700-1000 metres above sea level.
Habitat: It grows on pockets filled with black humus in reddish lava rocks along with Mammillaria priessnitzii and Ferocactus echidne. The climate is warm, humid without great changes in temperature.

Description: Mammillaria saxicola is one of the controversial forms of the very variable Mammillaria magnimamma. It distinguishes from the standard species for the olive green body, whitish flower, more radial spines and the presence of central spines. However it look very similar to other varieties of Mammillaria magnimamma which are linked one to each others by populations of plants with intermediate characteristics. Nowadays all them are thought to belong to a unique polymorphic species. Such variations has led to establishment of several unnecessary names for this species.
Habit: Mammillaria saxicola is a perennial stem succulent solitary at first, later branching basally (or dichotomously) to form large mounds up to 50 cm in diameter (or more) barely rising above ground level.
Roots: Fibrous.
Stems: Flattened globose, globose or cylindrical, olive-green, 5-8 cm in diameter and 4-10 cm tall. The apex sunken and covered with spines
Tubercles: Conic-pyramidal as long or longer than broad, 9-12 mm long and 5-7 mm wide with rounded tip, olive green or reddish, with latex, flowering axils with little white wool, especially when young.
Central: 1-2, needle like, the lowest the longest, straight or curving, 7 - 40 mm long, glassy yellow or brown with long dark tip.
Radial: 6-8, sometimes more, glassy yellow with brown tip, 2 - 5 mm long, stiff bristle like, unequal, the uppermost the shortest, radiating.
Flowers: Bell-shaped, whitish or pale pink with indistinct brownish pink midstripe, 20-22 mm wide and long and in diameter. Self sterile.
Fruits: Club shaped, red, 10-20 mm long, and 5 - 7 mm wide, sticking straight out from the stem.
Seeds: Brown. oblong, 1 mm long and 0,8 mm wide. Hilum subbasal.
Phenology: It flowers in id spring. Fruits ripen 10 months after flowering. 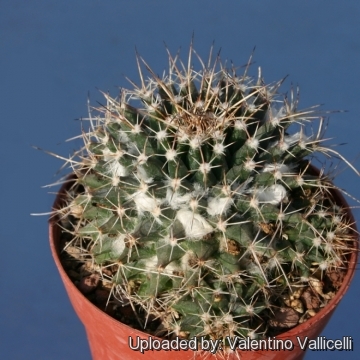 Mammillaria saxicola Photo by: Valentino Vallicelli
Send a photo of this plant.