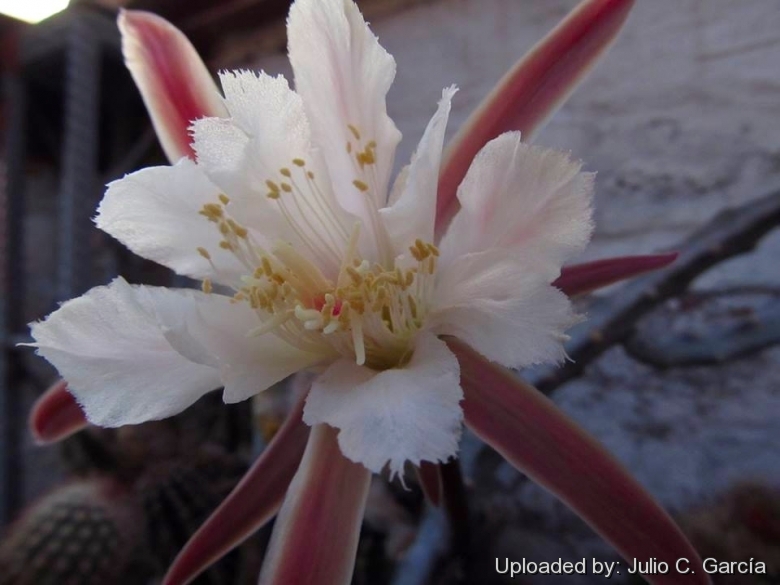 Piptanthocereus spegazzinii (Cereus spegazzinii) Photo by: Julio C. García
(The moonlight plant) Because of the beauty of flowers this cactus has met with great favour. It is one of the most prolific bloomers of all cacti, flowering from April to September. The flowers open in the early evening. Monvillea are also attractive because of their white purplish mottled or marbled stems.

Origin and Habitat: Cereus spegazzinii is reported to occur in Argentina, in the provinces of Santa Fe, Santiago del Estero, Salta, Chaco, and Formosa. It also grows in Bolivia, Brazil, and Paraguay.
Altitude range: It can be found at elevations between 10 and 500 metres above sea level.
Habitat and Ecology: This cactus grows in the interior and edge of dry forests and is common and abundant throughout its range. It is listed as Least Concern because it is widely distributed, is common and locally abundant, and there are no major threats affecting it. It is also present in many protected areas.

Description: Cereus spegazzinii, more commonly known as Monvillea spegazzinii, is a slender shrubby cactus that has a similar form and habitat to the night-blooming cereus (Peniocereus greggii). It puts forth many basal shoots, soon becoming tillered.
Stems: Branched, bluish mottled in purple and green, erect or semi prostrate , up to 1.8 m long or more, 2 cm inches in diameter;
Roots: Tuberose and succulent, Even adventitious roots of Cereus spegazzinii become succulent.
Ribs: Three to five (usually four) raised angular that have deep incisions similar to indentations along the edge. They are about 3 cm long at the base and bear small areoles at the apex of the protuberances.
Central spines: One (or any) up to 1.5 cm long.
Radial spines: The Young plants usually have three sharp, blackish spines 5 mm long, two pointing upward and one downward. On the older parts there are five radial and one central spine, 1.5 cm. long.
Flowers: 10 to 13 cm in length with a slender tube, reddish outer perianth segments and white inner ones. They arise from near the top on the sides of the stems; buds point upward but curve suddenly downward when the flowers open. They bloom at night.
Fruit: Smooth, red, juicy with persistent perianth remnant that withers slowly and dries attached to the end of the fruit. Flowers.
Remarks: These plants frequently produce monstrose crests, and crests occasionally produce normal shoots. The crested variety have spectacular blue marbled stems with pronounced sculpture effects. 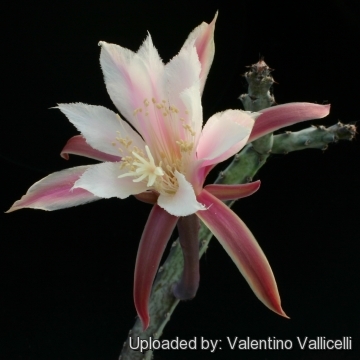 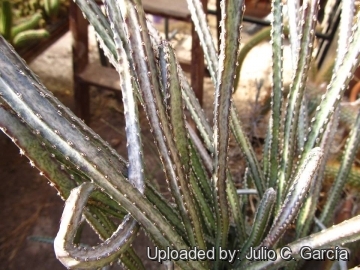 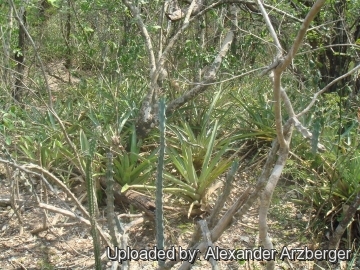 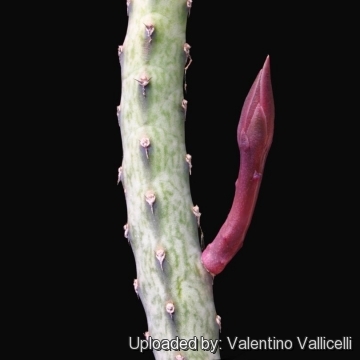 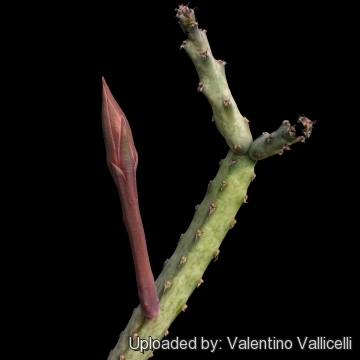 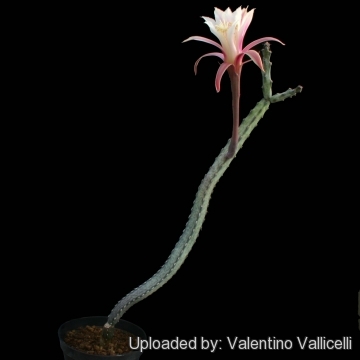 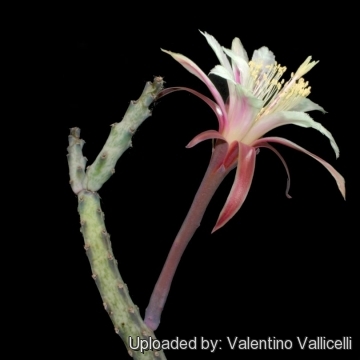 The gallery now contains thousands of pictures, however it is possible to do even more. We are, of course, seeking photos of species not yet shown in the gallery but not only that, we are also looking for better pictures than those already present. Read More...
Cite this page: "Piptanthocereus spegazzinii" Text available under a CC-BY-SA Creative Commons Attribution License. www.llifle.com 14 Nov. 2005. 17 Jan 2021. </Encyclopedia/CACTI/Family/Cactaceae/7040/Piptanthocereus_spegazzinii>