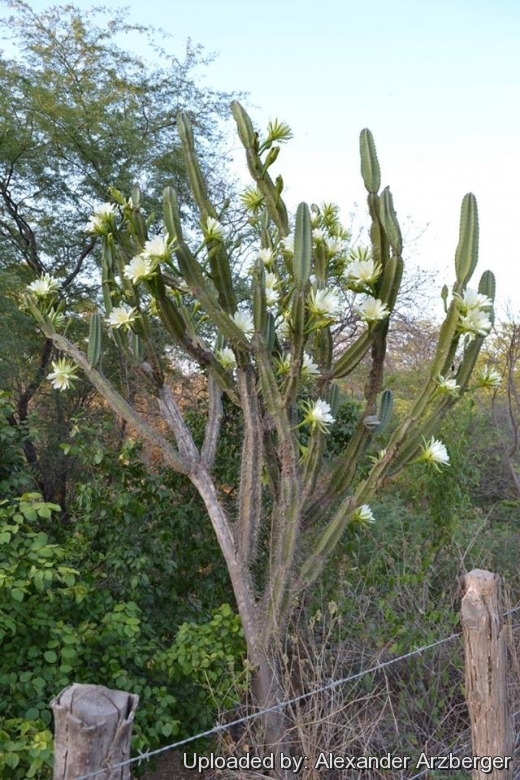 Origin and Habitat: Cereus jamacaru occurs in northeastern Brazil in Alagoas, Sergipe, Bahia, Maranhão, Pernambuco, Goias, and Minas Gerais. Planted in the West Indies; perhaps naturalized on some islands.
Elevation range. 50 to 1,200 metres above sea level.
Habitat and Ecology: This cactus grows in all kinds of situations from the coast
to the inland desert both in stony to sandy soil and on rocks of various kinds in caatinga, in agreste (ecotone between caatinga and mata atlântica), restinga, and cerrado The species can be abundant, being the dominant element in some areas of caatinga.The subpopulations of Cereus jamacaru have declined and continue to do so mainly due to habitat loss. However, it occurs over a vast area and within protected areas, and has the ability to re-establish after disturbance. Cereus jamacaru has also been introduced outside its native ranges and become invasive.

Description: Cereus jamacaru is a large tree-like cactus up to 10 meters high, with a short, thick, woody trunk, very much branched, the branches usually erect, numerous, often forming a compact top. When living in dense forests it has a simple stem or only a few branches, growing tall and erect, the branches have few ribs, but these are high and at first very blue, covered with formidable spines up to 20 cm long at times. The flowers are large and white, buds usually appear in the middle of spring and each flower lasts only for a night. They blossom at dusk and wither by the morning . Its fruit has a very strong violet colour. The pulp is white with tiny black seeds, and it is considered very tasty. Two subspecies are recognized, the nominate and subsp. calcrupicola (F.Ritter) N.P.Taylor & Zappi.
Derivation of specific name: The specific name "jamacaru", said by some writers to be the vulgar name of the plant in Brazil, is doubtless a corruption of mandacaru.
Stem: Main trunk distinct, woody, up to 60 cm in diameter. Branches cylindrical, segmented, when young often quite blue, to 15 cm in diameter, with few (4 to 6) ribs; ribs of young branches thin, compressed, high, more or less undulate, to 3.5 cm high.
Areoles: Large, grey, 2 to 4 cm apart, separated by notches.
Spines: Various, on old stems and branches numerous, awl shaped, at first yellow or brownish, later black, often very long, 20 to 30 cm long.
Central spines: 2-4, spreading, 8-20 (or more) cm long.
Radial spines: 5-7, to 1.5 cm long.
Flowers: Nocturnal, lateral, oblique, very large (up to 30 cm long, 18-20 cm in diameter), white; ovary purplish, bearing a few minute brown scales; stigma-lobes numerous, 2 cm long. The perianth cuts off early from the ovary, leaving the style, which is persistent.
Fruit: Large, sometimes 12 cm long by 8 cm in diameter, bright red, splitting down on one side showing the white edible pulp.
Seeds: 3 mm long, dull, roughened with blunt tubercles.
Chromosome number: 2n = 22. 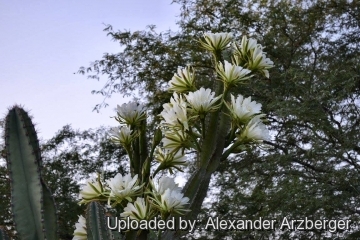 Cultivation and Propagation: The species is used to form living fences. In the past it was used as timber and for construction and boards suitable for boxes, picture frames, etc., are sawed from it. In most of the smaller houses in the country the cross pieces upon which the tile roofing is laid were made from this cactus. In times of great drought the farmers cut off the young branches from these cacti to feed to their cattle. The fruit is edible.