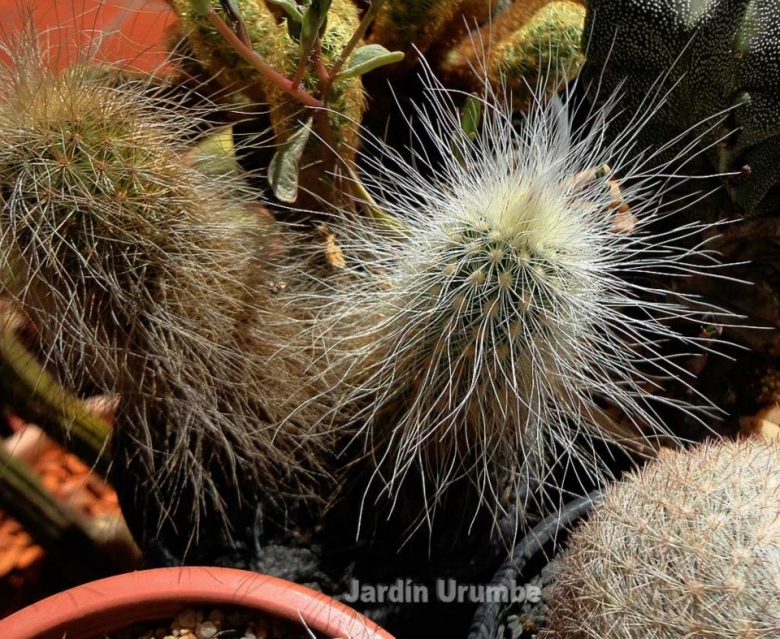 Cephalocereus delaetii (Echinocereus longisetus subs. delaetii) Photo by: Alexander Arzberger
Long, wavy, white, hairlike spines distinguish this species from its relatives in the genus. Its Spanish common name, viejitos, or little old man, is a fairly apt description of this unusual hedgehog — the only plant in the genus with long curling hairs.

Description: Echinocereus delaetii (now regarded as Echinocereus longisetus subs. delaetii) is a low, densely cespitose cactus with stems covered with long weak bristles or hairs. Over time, it can form -wide clumps up to 35 cm tall and 90 cm in diameter comprised of as many as 50 stems, but in cultivation it is typically smaller. Echinocereus delaetii is one of the most remarkable species in the genus, that very much resembles a small plant of Cephalocereus senilis, and owing to this resemblance it was first described as a Cephalocereus. Its flowers, however, are so different from those of that genus that as soon as they were seen the plant was at once transferred to Echinocereus. Unfortunately, although Echinocereus delaetii will always appeal to collectors because of its long white hair, it seems to be rather reluctant to flower. The flowers are pink, the ovary is also hidden by clusters of long white bristles.
Derivation of specific name: This member of the Cactaceae family was named in honor of Frantz de Laet, a Belgian cactus dealer, who had imported many plants from Mexico through Dr. C. A. Purpus and other collectors.
Stems: Low, densely clustering, 10-20(-35) cm high, 3-8 cm in diameter, completely hidden by the long, white, curled hairs.
Ribs: 17-24 indistinct (less than 17 in Echinocereus longisetus).
Areoles: Closely set
Spines: 15 or more, reduced to white (or brownish white) hairs, and variously wavy or curled 8 to 10 cm long and a few stiff reddish bristles.
Flowers: Pink to pale purple, slightly drooping with yellow centres, 5.7-10 cm long, 5.8-12.5 cm in diameter, appearing near the top of the plant. Perianth-segments pink, oblanceolate, acute to 55 mm long and 15 mm wide. Stigma-lobes about 12, green. Ovary covered with clusters of long, white, bristly spines.
Flowering season. Late spring through early summer. In cultivation, some collectors report that it is difficult to coax into flower, but in mild climates it flowers easily when grown in the ground.

Subspecies, varieties, forms and cultivars of plants belonging to the Echinocereus longisetus group

Cultivation and Propagation: Echinocereus delaetii is a very individual looking species with long white hairs reminiscent of an espostoa. It has the fame to be one of the more difficult to grow. It needs a very bright locality to grow well, soon making a clump of thick stems which then might produce its lovely pink flowers but only sparingly.
Water requirements: Less than average water at all times suits this choice plant. It rots easily and is very sensitive to overwatering (rot prone), so perfect soil drainage is a must.
Exposure. In the summer they need an airy location in bright sun; well watered when it's hot. To achieve the best spine density give these plants lots of sun.
Hardiness: In the winter light, cool, and absolutely dry conditions. It is cold resistant above approx -9 C or less for short periods of time. Hardiness Zone 8. In mild climate they grow well when planted freely outside in well-drained soil.
Pest and diseases: It is also rather susceptible to red spider mite, which can ravage the plant while concealed by the hairs.
Propagation: Seeds, Cuttings. It is best raised from seed.