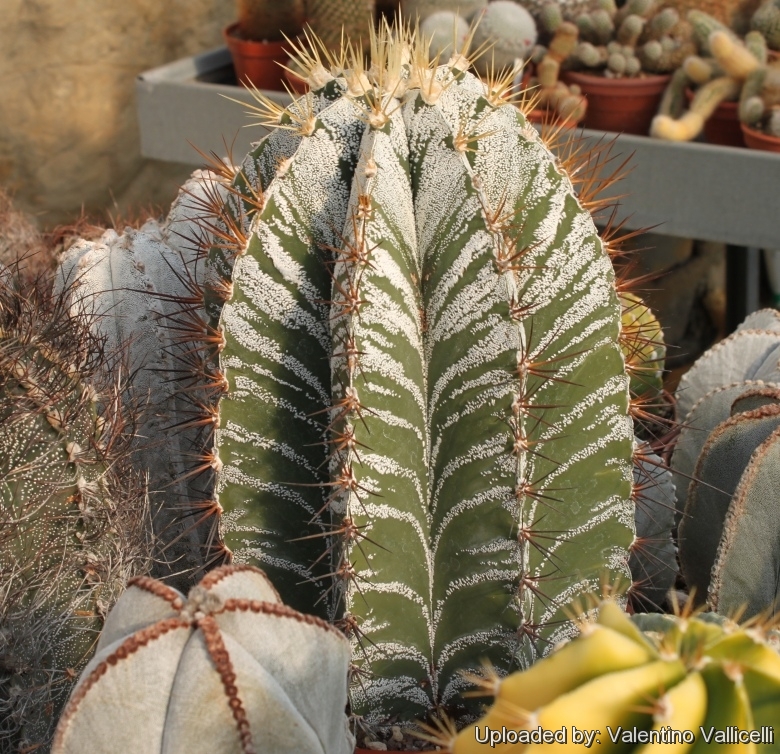 Origin and Habitat: Astrophytum ornatum is the southern genus of Astrophytum. The habitats are at Hidalgo, Queretaro, San Luis Potosí and Guanajuato in Mexico(extent of occurrence less than 8500 km2). In San Luis Potosí there is a hybrid zone with other Astrophytum species.
Altitude: It grows at altitudes between 800 and 2000 metres above sea level.
Habitat: It is locally abundant yet patchily distributed in semidesert xerophile scrub. It grows mostly in wild canyons and limestone cliffs sometime on near vertical rockfaces, it can also grow on rocks in deciduous forests. Its distribution in canyons is due to the specific parameters of humidity and temperature that are necessary for its growth and reproduction. Habitat destruction due to trampling from livestock (goats), land-use changes, mining, and illegal collection are the predominant threats. The same areas support endemic succulents and xerophyte plants such as with Lophophora diffusa, Mammillaria herrerae, Mammillaria parkinsonii, Coryphantha radians, Strombocactus disciformis, Echinocactus grusonii, Ferocactus echidne, Echinocactus ingens, Myrtillocactus geometrizans, Stenocereus dumortieri, Cephalocereus senilis, Agave stricta, Agave salmiana and many other.

Description: Astrophytum ornatum is a shortly columnar cactus appearing star-shaped from above, with white cross bands of woolly scales. It appears to be a very variable species especially for the density and distribution of white scales. It is the largest and easiest to grow and also the fastest of the astrophytums. It is also generally more heavily spined than other Astrophytums.
Stem: The stem is solitary, globose when young , cylindric with age, 30 to 120 cm (or more) high, 15-30 cm across, greyish-green to dark-green with more or less dense white or yellow woolly flakes in bands forming an ornate pattern.
Ribs: It has 5 to 10 (generally 8) straight or frequently spiralling, rather prominent, strongly compressed, more or less sinuate and crenate .
Areoles: 1 to 5 cm apart, at first yellowish-white felted, later grabrescent.
Radial spines: 5-11 stout, 2-4 cm long usually straight, subulated or ± laterally compressed, amber yellow, later brown and finally grey.
Central spine: usually 1 rather larger.
Flowers: At apex, large, lemon-yellow 7-12 cm broad, inner perianth segments broadly oblong, with a broad, more or less serrated apex, tube short woolly, scale on ovary, dark and very narrow. 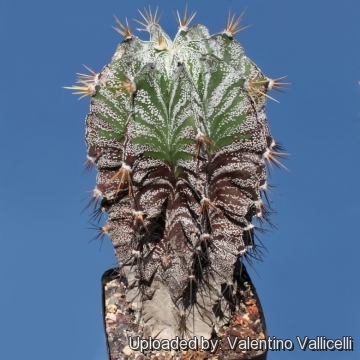 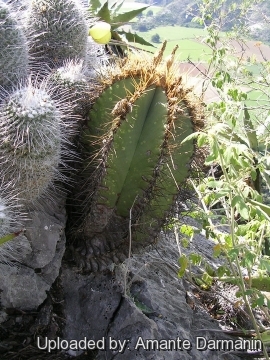 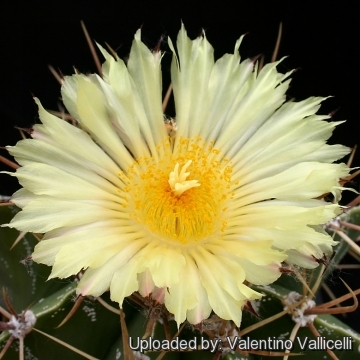 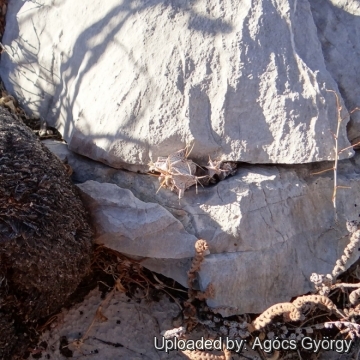 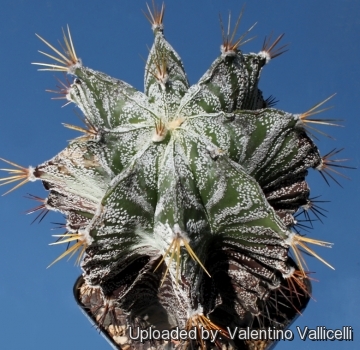 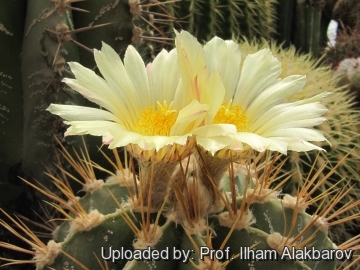 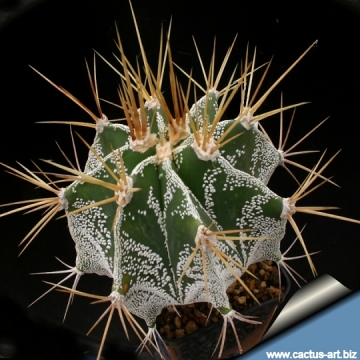 The body can be dark green with very few silvery felty "scales", or can be densely covered so as to appear nearly white. (Astrophytum ornatum) Photo by: Cactus Art 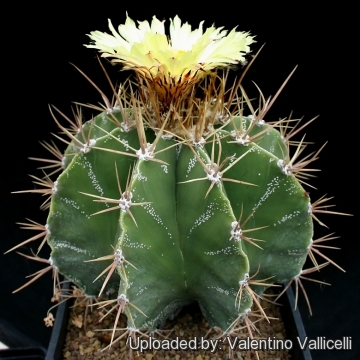