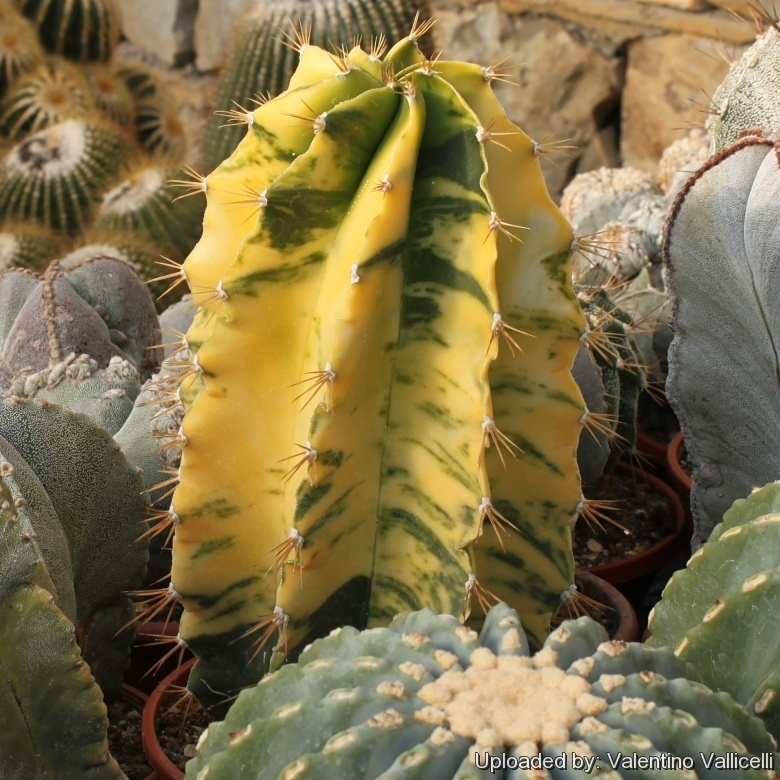 Description: Astrophytum ornatum is a shortly columnar cactus appearing star-shaped from above, with white cross bands of woolly scales. It appears to be a very variable species especially for the density and distribution of white scales. It is the largest and easiest to grow and also the fastest of the astrophytums. It is also generally more heavily spined than other Astrophytums.
Astrophytum ornatum var. glabrescens f. aurea distinguishes for its stout almost naked dark green stem variegated with creamy-white, yellow and green without (or with very few) white hair-tufts, on the contrary the white hair-tufts in typical plants are in broad bands, seeming to be hanging from opposing areoles and take a long time in the transition to the adult form. Up to date many botanists don’t recognize the variety rank to this taxon which does not differ conspicuously from the other forms of the species. It seems to be a pretty variable plant with several and variously variegated clones. These pictured plants are very attractive and highly prized. They are sometime seen grafted on stronger columnar species, but can be easily grown on their own roots, but quite slow growing.
Stem: The stem is solitary, globose when young, cylindric with age, 30 to 120 cm (or more) high, 15-30 cm across, variegated with creamy-white, yellow and green.
Ribs: It has 5 to 10 (generally 8) straight or frequently spiralling, rather prominent, strongly compressed, more or less sinuate and crenate .
Areoles: 1 to 5 cm apart, at first yellowish-white felted, later grabrescent.
Radial spines: 5-11 stout, 2-4 cm long usually straight, subulated or ± laterally compressed, amber yellow, later brown and finally grey.
Central spine: usually 1 rather larger.
Flowers: At apex, large, lemon-yellow 7-12 cm broad, inner perianth segments broadly oblong, with a broad, more or less serrated apex, tube short woolly, scale on ovary, dark and very narrow. 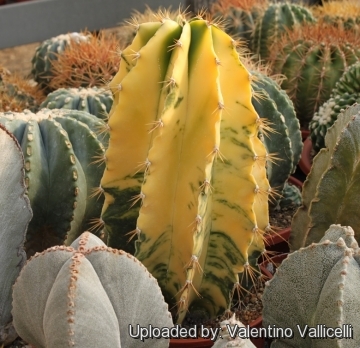 The gallery now contains thousands of pictures, however it is possible to do even more. We are, of course, seeking photos of species not yet shown in the gallery but not only that, we are also looking for better pictures than those already present. Read More...
Cite this page: "Astrophytum ornatum f. nuda variegata" Text available under a CC-BY-SA Creative Commons Attribution License. www.llifle.com 14 Nov. 2005. 07 Oct 2022. </Encyclopedia/CACTI/Family/Cactaceae/26260/Astrophytum_ornatum_f._nuda_variegata>