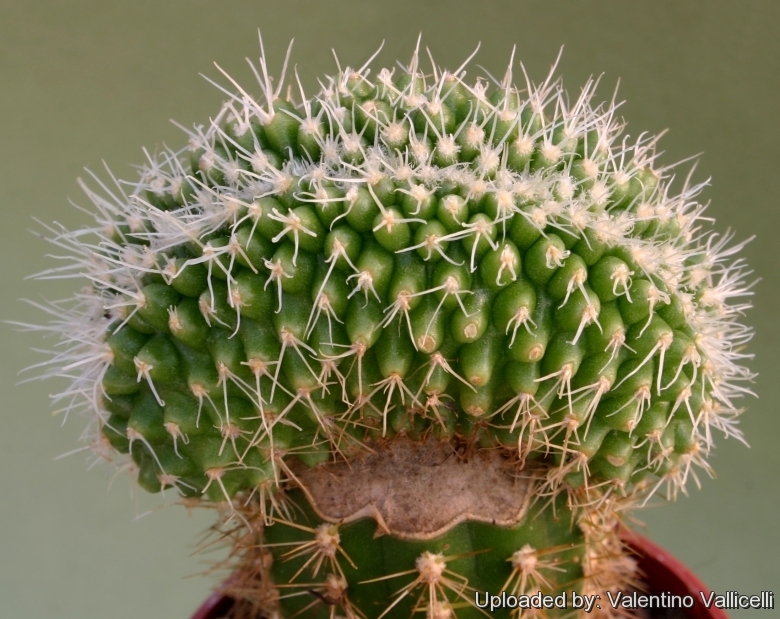 Description: This is a very nice crested cactus, easily recognizable for its short yellowish bristly soft spines. The standard "Golden Barrel Cactus" (E. grusonii) is a large spherical barrel cactus with imposing strong yellow spines, and one of one of the more common an known cacti. This species is widely cultivated and gave rise to a number of different cultivars, monstrose and crested forms. The E. grusonii forma minor cristata - here described - is the smallest and delicate crested variant, quite rare in collection and priced for its reduced size and touch friendly covering of soft spines, it will form tangled brain-like green mounds and can reach a considerable size (up to 30 cm tall and in diameter, or more ).
Spines: It has few short and more or less twisted spines, bristly, glassy pale-yellowhis spines all quite similar in shape, that loosely cover the surface of the stems.
Remarks: The cause of cresting is not fully explained. Biologists disagree as to why some plants grow in this unusual form. Some speculate that it is a genetic mutation. Others say it is the result of a strike of lightning or freeze damage, but whatever the stimulus, the growth point of the stem has switched from a geometric point, to a line, which folds and undulates as the crest expands. Though these crested E. grusonii are rare, cresting occurs naturally, and can be encountered in many other cactus species. 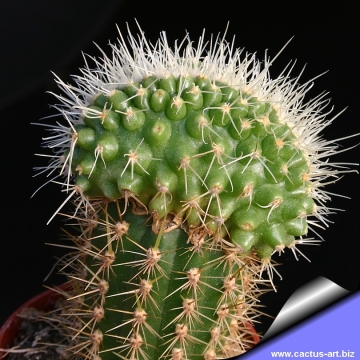 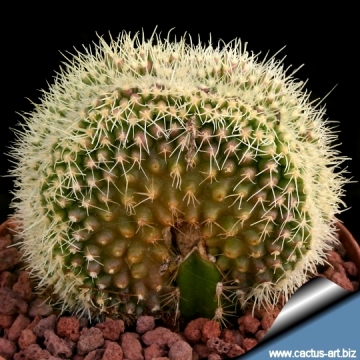 Cultivation and Propagation: It is of easy cultivation. Require full sun or half shade. The plants on their own roots should be kept in a deep pot with a very draining mineral substrate. But be particularly careful with watering, which all crested plant require (rot sensitive). Keep dry during the winter rest. Since they are rapid growers, and need plenty of space for their roots, repotting should be done every other year or when the plant has outgrown its pot.
The grafted plants are easy to grow and will form a large brain-like mounds with age. Watering during the active growing season (spring and summer); this will encourage steady growth, and prevent the crest from becoming flabby. It need a well drained soil mix. Water generously during the summer but allow to dry fully before watering again. During the winter months they should be kept rather dry.
Propagation: Propagate from cuttings or graft.