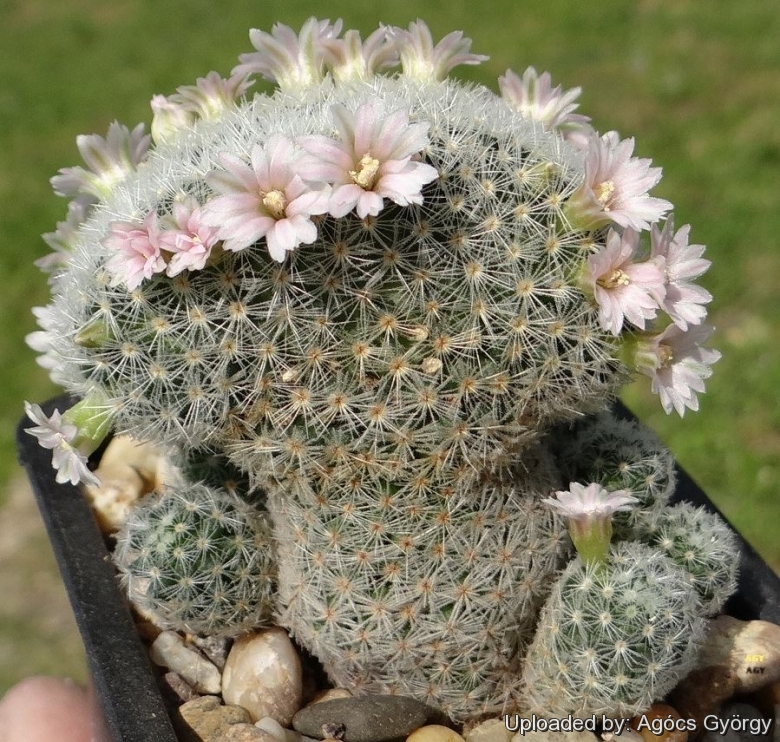 Origin and Habitat: Garden origin: The natural species comes from Mexico (Tamaulipas) where it grows among rocks, on fertile soils rich in dark organic material produced by the decomposition of vegetable matter in open pinion woodland, 700-1400 mt altitude.

Description: The typical Mammillaria schiedeana subs. giselae (Mammillaria giselae) is a small clustering cactus with up to 15, or rarely as many as 35 stems. Individual cluster up to 10 cm in diameter (or more in cultivation). It has about 16-21 radials ( 2- 5 mm long), fine, needle-like, feathery, flexible, somewhat pectinated, white, yellow to almost orange and few very central set between the series of radials and very short, from 0.17 mm long. The flower are pale pink to pink, with darker, narrow midstripe.
Crested form: The crested form is cultivated for its fan shaped stem with dense bristly spine. Flowers are produced on the the apex of crested stems too. Crested specimens are often grafted on stronger species, called the stock, that can be any number of different columnar cactus. 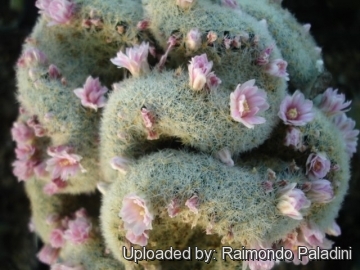 Cultivation and Propagation: It is a slow growing species of easy culture, recommended for any collection, it doesn't require any special treatment. Water regularly in summer, but do not overwater (Rot prone) Use pot with good drainage and a very porous potting media, keep dry in winter. Feed with a high potassium fertilizer in summer. It is quite frost resistant if kept dry, hardy as low as -5° C (some reports give it hardy to -5°C) Sun Exposure: High levels of light are needed to flower and for good spine development. Can be sunburned if moved from shade/greenhouse into full sun too quickly. During the spring it may be able to take full sun until the heat arrives at the end of spring. In an area that has hot afternoon sun, it may be able to take full morning sun, but requires afternoon shade or afternoon light shade. If grown correctly, it will reward the grower with generous displays of purple flowers.
Clustering in cultivation after several years and easily flowered. For best results, use a shallow pot, and only use the smallest diameter pot that will accommodate the plant.
Propagation: Direct sow after last frost (usually) or division, wait until the offsets that appear at the base of old clustered specimens are 1/3 the size of the parent and then detach and plant. (Cuttings root quickly)