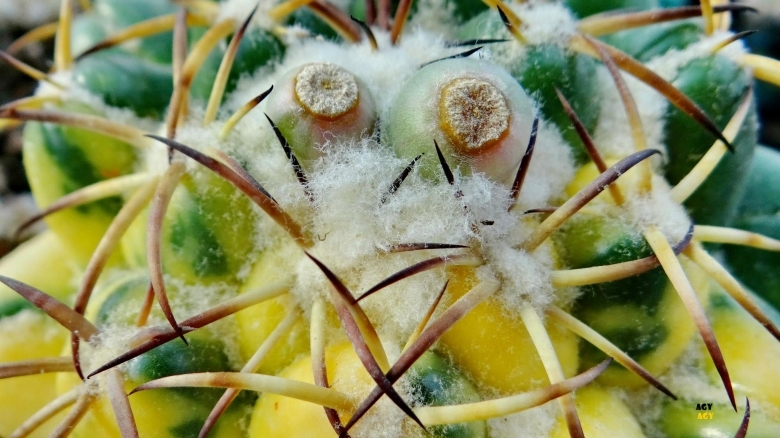 Origin and Habitat: Garden origin. The natural species is endemic to Mexico where it is known to occur in the states of Aguascalientes, Guerrero, Guanajuato, Hidalgo, Jalisco, México, Michoacán, Morelos, Oaxaca, Puebla, Querétaro, Veracruz and Zacatecas.

Description: The typical Coryphantha elephantidens is a a large, depressed-globular cactus up 18 cm in diameter, very large tubercles 20-30 (60) mm wide, rounded on top, pentaedrical at the base, always broader than rounded, without glands, the tubercles axil is woolly. The tubercles are capped with a 5-8 of stout recurved radial spines, 18-26 mm long never erect, but adpressed to the body. The sweet smelling flowers are large 6 to 7.5 cm whitish to pink-coloured.
Variegated form: Variegated Coryphantha elephantidens are cultivated for their beautiful stem that have sectors, patches or stripes with two colours, yellow and green. There are several forms of variegation. The extent and nature of the variegation can vary, and sometimes the plant will return to the green form. In others it is stable and does not change under normal conditions. Flowers are produced only on the crown of mature specimens. Variegated specimens are sometime grafted on stronger species, called the stock, that can be any number of different columnar cactus.