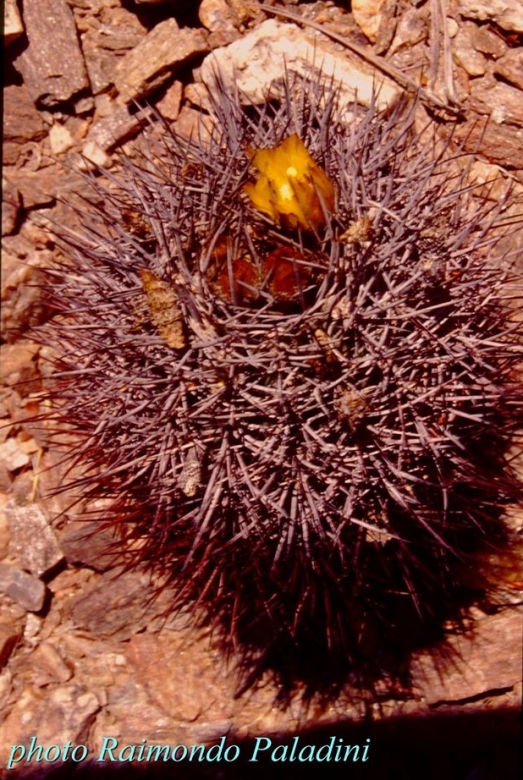 Description: Eriosyce strausiana subs. pachacoensis (firstly described as Pyrrhocactus pachacoensis by Walter Rausch in 1975) is a local or morphological form of the widespread and variable Eriosyce strausiana. This subspecies has smaller solitary stems with dense pink-grey spines. However the distinguishing characteristics of subs. pachacoensis, appear to fall within the natural variation of Eriosyce strausiana and some authors have dismissed Eriosyce strausiana subs. pachacoensis as perhaps not worthy of even varietal status.
Derivation of specific name: This member of the Cactaceae family was given the name pachacoensis for the occurrence near Pachaco, San Juan, Argentina.
Stem: Single, spherical to slightly elongated, pale grey-green, glaucous, up to 10 cm tall and 8 cm in diameter.
Ribs: About 13, tuberculated vertical or slightly twisted. Tubercles up to 10 mm in length.
Areoles: Large, oval, 5 mm long at first covered with white felt later bare.
Central spines: Up to 2 curved upwards, greyish-pink, tip iridescent black, greying over the time, up to 3 cm in length.
Radial spines: 8-12 similar to central but thinner, whitish-grey to pink, 4 to 6 of which paired and one pointing downward bent toward the stem, 10-15 mm cm long. Spines all subulated thickened at the base.
Flowers: Nearly apical, Funnel-shaped, wide, yellow-green to yellow, 3.5 cm long and in diameter. Ovary conical green with small blue-green scales, with light-brown hairs. Tube with yellow-green, with yellow-green scales, ending in a brown papery tips with light-brown wool and long brown bristles. Outer tepals lanceolate, bent outward, pale yellow with red-brown median strip. Inner tepals lanceolate, toothed, pale yellow with wine red central stripe and tips. Throat yellow. Stamens and anthers light yellow. Style thick with 8 yellow stigma lobes.
Fruit: Barrel-shaped, 8 mm long and 5 mm in diameter, reddish brown, with white hairs, white and red-brown and dark-brown bristles.
Seeds: Kidney-shaped, 1.5 mm long, 1 mm thick, black-brown.