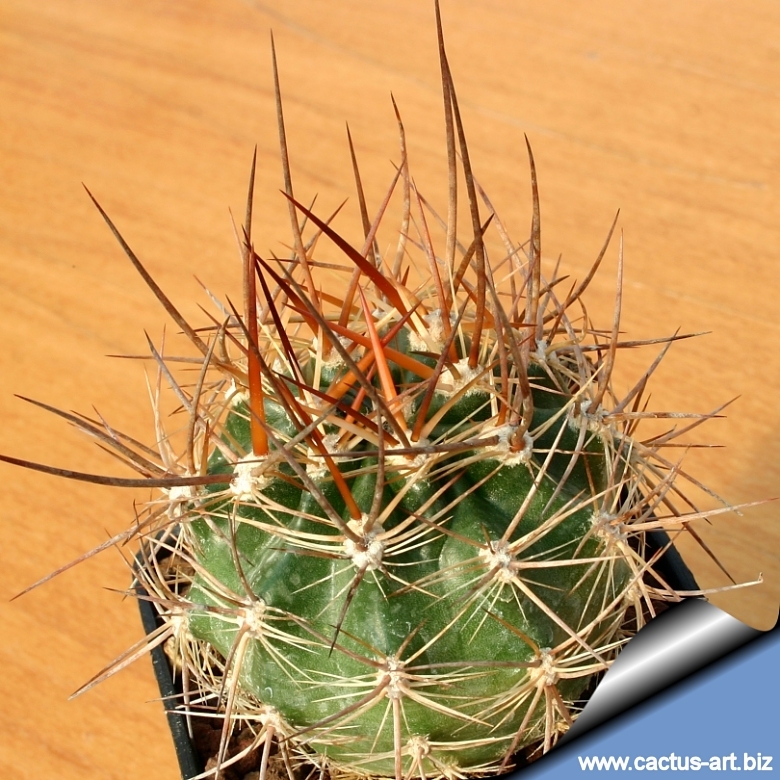 Origin and Habitat: Jujuy and Salta Provinces, Northern Argentina (Los Andes).
Altitude: From 3500 to 4200 metres above sea level.
Habitat: It is found in high, dry, rocky grasslands in valleys and rocky slopes of the Andes in fully exposed sites along with a succulent flora comprising Lobivia chrysantha, Gymnocalicium spegazzinii, Pyrrocactus umadeave. Inhabitants must be very rugged in order to tolerate such extremes in exposure. Echinopsis korethroides is such a robust individual. However in habitat the plant is often bathed in fog during the summer months and even when exposed to full sun, heat is typically not a factor. The dense covering of spines reduces the interception of solar radiation by the stem surface lowering the risks of overheating the apex during a summer day and of freezing during a winter night.

Description: Echinopsis korethroides is probably one of the many geographical forms of the extremely variable Echinopsis formosa and is placed as a subspecies by some authorities. It is a massive growing barrel cactus with a solid and spiny presence, solitary at first, but often branching basally to form colonies later. The dense yellowish-brown or reddish-brown spines would protect it from the extremes of cold and sunshine. The new spines are actually dark brown and appear in the spring.
The spines can become so dense on mature specimens that the plant's body becomes obscured from view.
Stem: Globose, oblong to shortly columnar, flat and somewhat depressed at the top, up to 70 cm high and 30-50 cm wide, multiply- ribbed, dull to glossy pale green, up to 0,5-1(-2) m tall, 20-35(-50) cm in diameter.
Ribs: More than 20, narrow, tuberculate
Areoles: whitish.
Radial spines: 12-20, needle-like, spreading, straight or slightly curved, colourful dry grass (or straw), amber, brown or reddish brown with dark tips, turning greyish-white as they ages, unequal, up to 3 (or more) cm long
Central spines: 4 , acicular, yellowish to reddish-brown, sometimes banded and flattened, sharp, of variable length which, in some cases, can reach the 20 cm.
Flowers: Diurnal, orange, pink, red to dark purple, bell-shaped or funnelform, originating in the apical zone and are about 7 cm long and 4,5 cm broad. Tube short. axils of scales filled with woolly hairs.
Blooming period: Open in the day in the spring.

Cultivation and Propagation: Echinopsis korethroides is one of the more cold hardy barrel cacti, that tolerates
in winter both, ice, snow, hail, and rain and temperatures down to – 12° C
Growth rate: It is a relatively rapidly growing species that will make clumps given the best conditions.
Soils: It likes very porous standard cactus mix soil. Prefer a low pH compost, avoid substrata rich in limestone; otherwise growth will stop altogether.
Repotting: This plant needs plenty of space for its roots, repotting should be done every other year or when the it has outgrown its pot. Use pot with good drainage.
Watering: Needs moderate to copious waterings in summer, but do not overwater (Rot prone), keep dry in winter at a minimum temperature of 0°C.
Fertilization: Feed with a high potassium fertilizer in summer.
Hardiness: Reputedly resistant to frost if kept on the dry side prior to, and during, cold weather (hardy to -12 C ° C, or less for short periods). Zone 8b to 10
Exposition: The plant tolerates extremely bright situations which encourages flowering and heavy spine production, but is likely to suffer from sun scorch or stunted growth if over exposed to direct sunlight during the hottest part of the day in summer. It may tolerate filtered sunlight or afternoon shade.
Uses: It is an excellent plant for container growing. It always looks good and stays small. It look fine in a cold greenhouse and frame or outdoor in a rockery.
Pests & diseases: It may be attractive to a variety of insects, but plants in good condition should be nearly pest-free, particularly if they are grown in a mineral potting-mix, with good exposure and ventilation. Nonetheless, there are several pests to watch for:
- Red spiders: Red spiders may be effectively rubbed up by watering the plants from above.
- Mealy bugs: Mealy bugs occasionally develop aerial into the new growth among the wool with disfiguring results, but the worst types develop underground on the roots and are invisible except by their effects.
- Scales: Scales are rarely a problem.
- Rot: This species is particularly easy and accommodating, seldom suffer of cryptogamic diseases. Rot it is only a minor problem with gymnocalyciums if the plants are watered and “aired” correctly. If they are not, fungicides won't help all that much.
Propagation: Division of larger clumps, direct sow after last frost. Seeds germinate in 7-14 days at 21-27° C in spring, remove gradually the glass cover as soon the plants will be well rooted (ca 1-2 weeks) and keep ventilated, no full sun for young plants! To make a cutting twist off a branch and permit it to dry out a couple of weeks, lay it on the soil and insert the stem end partially into the soil. Try to keep the cutting somewhat upright so that the roots are able to grow downward.