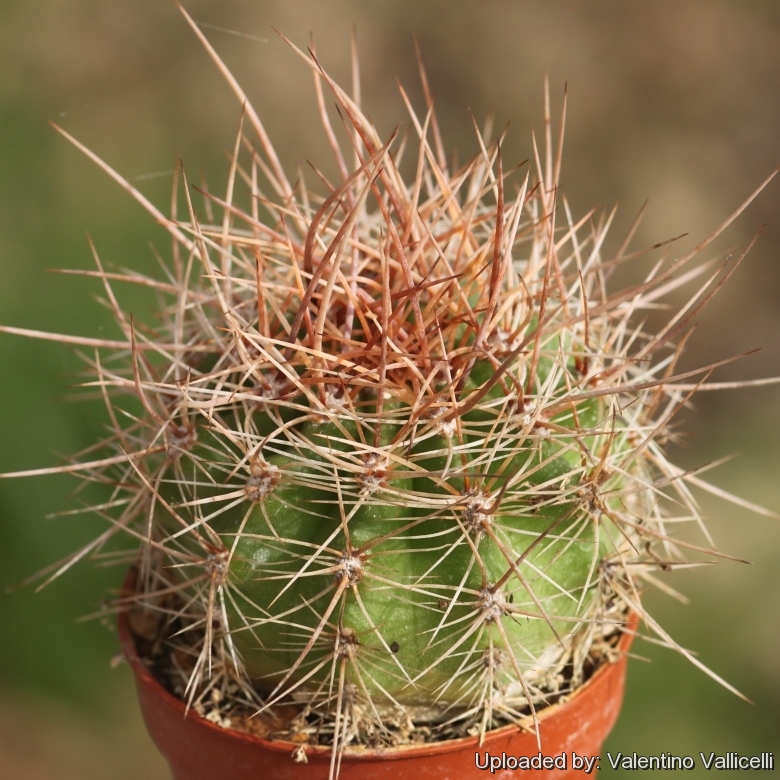 Origin and Habitat: Echinopsis formosa is widespread in a wide area comprising Catamarca, western Argentina and Chile on both sides of the Andes.
The subsp. rosarioana is endemic to Sierra Famatina (Carrizal, Los Corrales, Cuevas de Noroña, Miranda, La Mexicana, Angosturas) La Rioja, Argentina.
Altitude: Up to about 3500 m.a.s.l.
Habitat: Valleys and rocky slopes of the Andes amongst short grasses in fully exposed sites. Inhabitants must be very rugged in order to tolerate such extremes in exposure. Echinopsis formaosa is such a robust individual. However in habitat the plant is often bathed in fog during the summer months and even when exposed to full sun, heat is typically not a factor.

Description: Echinopsis formosa subs. rosarioana is probably one of the many geographical forms of the extremely variable Echinopsis formosa. The dense golden or amber coloured spines would protect them from the extremes of cold and sunshine. The new spines are actually dark brown and appear in the spring.
Habit: Echinopsis formosa is a massive growing barrel cactus with a solid and spiny presence, solitary at first, later branching basally to form wide colonies.
Stem: Globose to columnar, multiply- ribbed, pale green or blue-green, up to 0,5-1(-2) m tall, 20-35(-50) cm in diameter.
Ribs: 15-35(-50) vertical with remarkable notches and tubercles.
Areoles: Elliptic, initially covered by a dark-brown down and about 1 cm apart.
Radial spines: 8-16, needle-like, spreading, straight or slightly curved, colourful yellowish, amber or reddish brown, up to 3 (or more) cm long
Central spines: 2-9, acicular, brown, of variable length which, in some cases, can reach the 20 cm.
Flowers: Fire yellow to orange-red to red, funnel-shaped, diurnal, originating in the apical zone and are about 6-9 cm long and broad.
Blooming period: Open in the day in the spring.
Fruit: Globose, 3-4 cm of diameter, acid green, covered by scales and down; the pulp is white, edible, and contains several black seeds. It usually reproduces by seed. 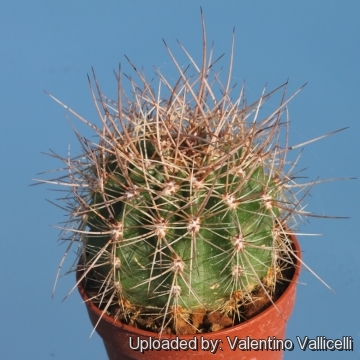 Cultivation and Propagation: Echinopsis formosa is very easy to grow and cold hardy as low as -12°C (or less). Need a fertile, well drained soil mix. Water the plants well and allow them to dry before watering again. During the growing season fertilize them monthly with a balanced fertilizer. Plants grown in the ground form soon imposing specimens.
Sun Exposure: Outside full sun, at the maximum possible luminosity, inside needs bright light, and some direct sun. When cultivating this plant in low elevation zones where it is very hot, a bit of shade may benefit this plant in summer.
Winter rest: During winter month, put them in a cool luminous place and encourage them to enter winter dormancy by withholding water and fertiliser over the winter as they will etiolate, or become thin, due to lower levels of light. Keep them dry with temperatures possibly between 0 and 5°C (or even less), this period of cold and dry rest is useful for stimulating the blossoming.
Pest & diseases: They are susceptible to fungal diseases if overwatered, but are not nearly as sensitive as many other cacti, especially in warm weather. If kept damp through cold periods, they will invariably suffer.
Propagation: It usually reproduces by seed or sometime by cuttings (rarely available). The flower colour is not always true from seeds.