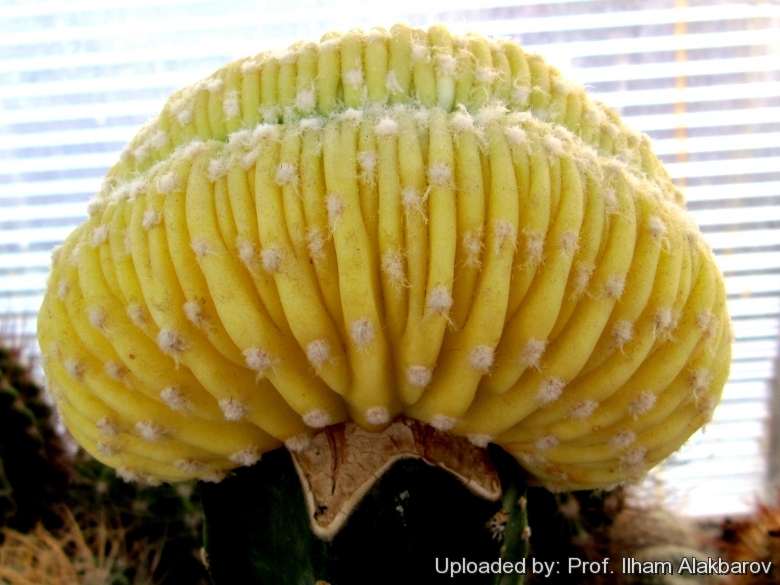 Description: Echinopsis subdenudata f. cristata is a very nice crested Echinopsis, easily recognizable for its almost spineless body.
Forma aurea or aurata (yellow form): The schizochromic form (Echinopsis subdenudata f. cristata aurea) has yellow stems due to the absence (or reduced production) of chlorophyll pigments: every other pigment is present at normal levels, the dominant green colouration is lost, but will still more than likely have normal other pigments that give the yellow overall appearance of the stem. This form with yellow stems is very attractive and highly prized. This schizochromic form is almost always seen grafted on stronger columnar species, and cannot can be grown on its own roots.
Stem: Very fat, yellow (quite large for a crested plant ( 8 to 20 cm thick) it can form in age a huge convoluted mound.
Spines: Absent.
Flowers: These cacti produce gorgeous, night-blooming, white funnel-shaped, fragrant flowers with long tubes 15-22 cm long. Old plant may have many flowers at a time. This species blooms from late spring to all summer long, the flowers open on the morning of the first day and remain opened all the night long but last only one day in full beauty, at the second day they start to wither. 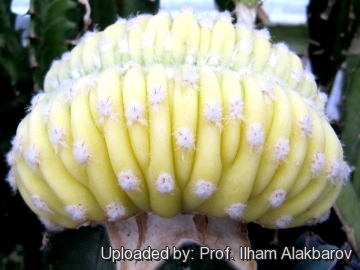 Cultivation and Propagation: Variegated and albinos cacti are regarded as choice and difficult in cultivation, but despite that many of them are relatively easy to grow. But be aware that they cannot tolerate prolonged exposure to direct sun light (especially during the hottest summer days), so grow them in half-shade or under filtered sun. They are sometime seen as grafted plants, but many grow well on their own roots, too.
On the contrary, the albinos can survive only if grafted on a strong green base.
Use mineral well-permeable substratum with little organic matter (peat, humus). Water sparingly from March till October and keep perfectly dry in winter at temperatures from 5 to 15 degrees centigrade. (In general these plants are more tender and cannot endure freezing temperatures ) In the rest period no high atmospheric humidity!!
Propagation: Plants are almost always grafted onto column-shaped cacti.