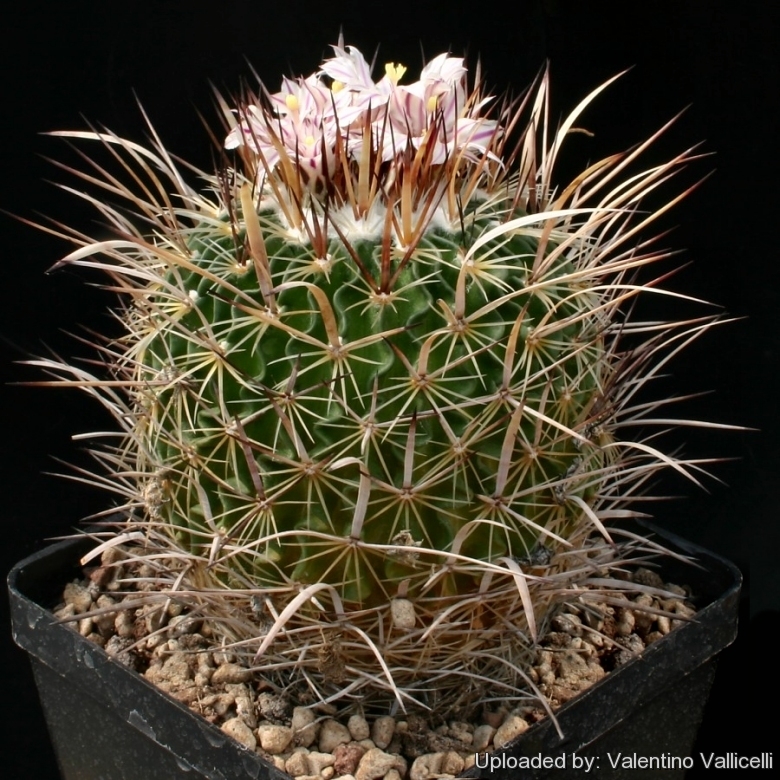 Stenocactus densispinus Photo by: Valentino Vallicelli
This species is topped with a wisp of white-pink flowers. Such fragile beauty is surrounded by numerous spines that barely conceal the sinuous ribs

Description: Echinofossulocactus densispinus (Stenocactus) is one of the innumerable forms of Stenocactus ochoterenanus which is one of the most widespread and morphologically variable taxon. It is a solitary or clustering cactus distinguished from the type species for its numerous white radial spines (to 22 or more). The name Echinofossulocactus densispinus is an invalid name (nom. subn.) without exact citation of holotype) and is not accepted by many botanists that treat it as synonym, but it still has a value for a collector because they identify plants with particular characters.
Stems: Up to 8 cm tall, 10 cm in diameter with woolly apex;
Areoles: young areoles with white hair.
Ribs: Barely visible beneath the numerous white radial spines, thin sometimes wavy.
Radial spines: Radials white numerous 22 or more.
Central spines: 4, the superior one up to 6.5 cm long flattened dark-brown that age to tan.
Flowers: Pale pink or pale greenish yellow, 2.5 cm long.
Fruits: Greenish fruit with whitish scales.

Subspecies, varieties, forms and cultivars of plants belonging to the Stenocactus ochoterenanus group 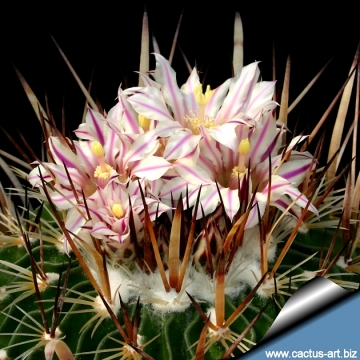 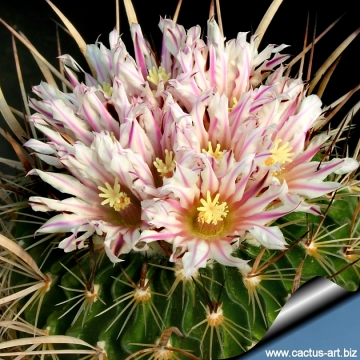 Cultivation and Propagation: Easy to to care and flower. No absolute schedule can be given for watering as various factors (Soil mixture, containers, drainage, temperature, size of plant) influence water use, so - as a general rule - the soil should be thoroughly wetted at each watering during the active growing season (spring and summer), water when the top 1,5- 2 cm of soil feels dry to the finger. Do not soak the soil during the dormant period. Be careful, excessive watering can make root and/or stem to rots. Make sure there is good air circulation between plants. Good drainage is essential along good moisture retention properties and adequate nutrients availability. Require bright sunlight to grow well. Dormant plants do best at temperatures from 5-10°C (but will tolerate -5° for short periods). The cooler temperatures develop sturdier plants and encourage the formation of flower buds.
Propagation: By offsets which often are found growing around the base of the plant, Remove the basal offset (if available) in spring or summer and let the cuttings dry for a few days before inserting in compost or (usually) by seed.