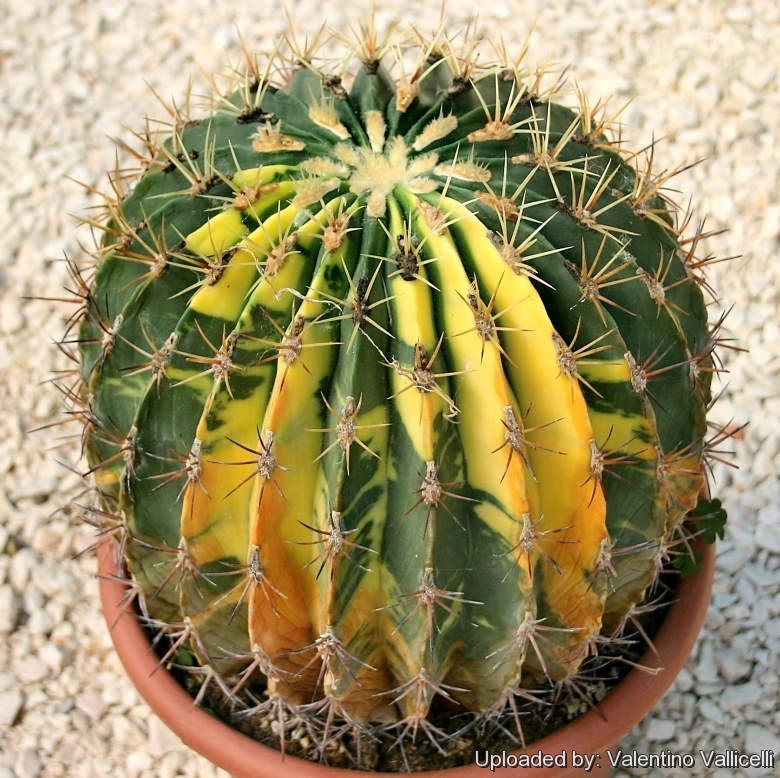 Ferocactus histrix f. variegata Photo by: Valentino Vallicelli
It is a solitary plant that might grows up to 1 m tall, 70 cm in diameter

Description: Variegated Ferocactus can be found (although not common) in cultivation and some of these variegated plants have a place in most collections. All variegates are mutants. Something has gone wrong with the cellular structure of the growth tip (apical meristem) of the plant. As a result of this mutation, chlorophyll is missing from some or all layers of the plant epidermis. The odd variegate appears in many seedling batches in a small percentage and are generally separated from normal plants. Variegated plants grow slower and are generally smaller than non-variegates of the same species. Coloured areas are also generally weaker, and more susceptible to fungus, sunburn and other defects. A large well grown variegate Ferocactus is truly an achievement. These are harder to grow well than they appear.
Habit: The standard Ferocactus histrix is a barrel cactus usually unbranched, forming a single moderately tall column.
Stem: Bluish green with sectors, patches or stripes with distinct shades of yellow or orange, globular to short-cylindric up to 110 cm tall and 50-60(-80) cm in diameter, with large, depressed, woolly stem tips.
Ribs: to 20-40 or more.
Areoles: 2 to 3 cm apart, almost confluent in old plants.
Spines: 10 to 12 stout, amber yellow, becoming brown, red to brown at base.
Central spines: 1-4 uppermost 2-1 to 3,5 cm, lowermost, much stouter and longer, 4-6(-9) cm long, porrect or ascending, annulate, sometimes flattened or angular in cross section, and often slightly down-curved, except in young plants.
Radial spines: slender-subulate 6-9 2 to 3 cm. long, more or less spreading.
Flowers: Bell shaped, 2-3,5 cm long, 2,5 cm in diameter, bright yellow, sometimes reddish; inner perianth-segments linear-oblong, acute, somewhat spreading; stigma-lobes 6, linear, green; scales on the ovary ovate, acute, small, 2 to 4 mm long, somewhat ciliate. It is an obligate outcrossing cactus.
Fruit: Short-oblong, 2-3 cm. pinkish, fleshy and somewhat edible. Often bursting apically to release seeds in liquid.
seeds: Minute, 1 mm long, dark brown, testa finely pitted.
Blooming season: Summer. 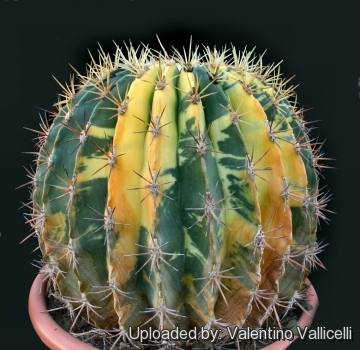 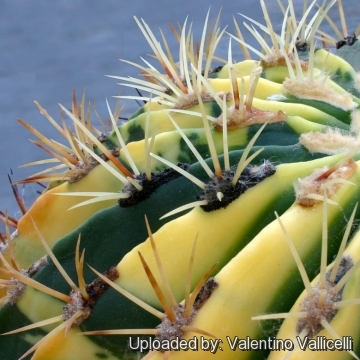 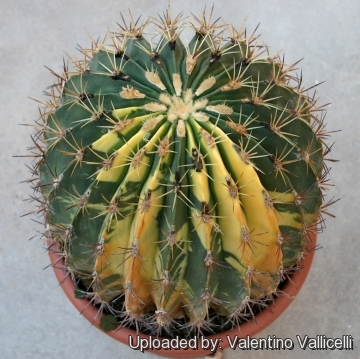 Cultivation and Propagation: In the summer it is best to avoid direct sun during the hottest hours of the day (but benefits of morning sun, that help to produce strong and colourful spines), in case of cultivation in full sun it is best to plant with the variegated spot facing northeast, so it gets the least amount of direct sunlight as possible.