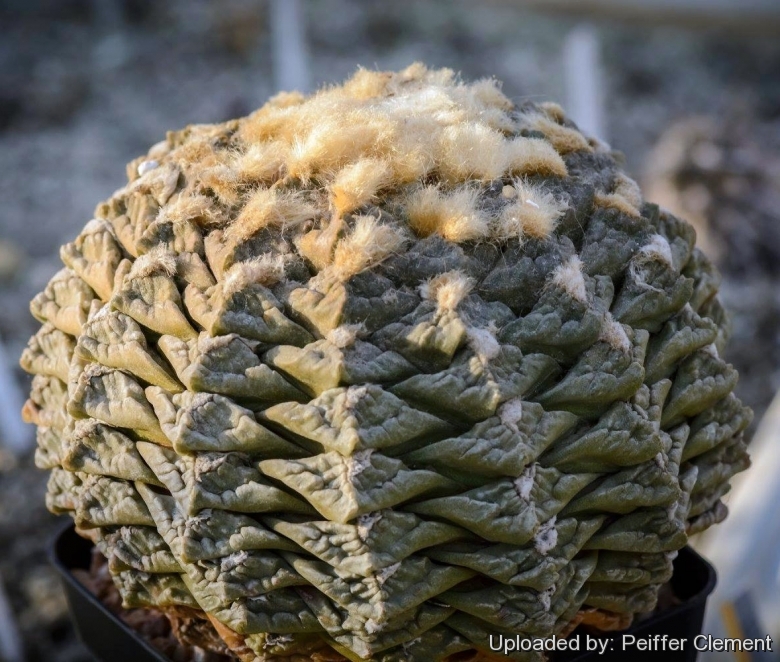 Origin and Habitat: It grows in central Mexico and ranges from southern Coahuila and adjacent Zacatecas to eastern Durango (Nazas, Peñon Blanco).
Habitat: These plants are characteristic of dry limestone ridges and low, rocky hills of limestone chips at an altitude of 500-1500 m among the Chihuahuan desert scrub.
Ecology: The stems are normally flush and well camouflaged with the soil surface resembling limestone chips in shape, colour, and texture, rendering the plants extremely cryptic. They are greyish-green in colour, sometimes taking on a yellowish tint with age. These cacti are difficult to spot in their natural habitat. When they are found, it is usually due to their pinkish flowers.
In times of severe drought, the whole above-ground portion of these plants can shrink and be covered by rock fragments, but the taproot remains alive. Many exist as only small, isolated populations, and are in danger of extinction because they sought by plant collectors. For this reason they are protected plants in the regions where they occur.

Description: Ariocarpus fissuratus var. lloydii is traditionally distinguished from var. fissuratus by its higher, somewhat rounded and more convex stem appearing above the ground.
Stem: Scarcely appearing above the ground, flat to somewhat rounded and sometime even columnar shaped in cultivation. In habitat the stems in adult specimens ranges from 10 to 15 cm in diameter.
Tubercles: The tubercles of var. lloydii are very different from those of the standard Ariocarpus fissuratus and easily recognizable. They are imbricated, ovate, broad at base and usually more rounded at the apex, about 2 to 3 cm wide. They lack edges and lateral longitudinal furrow (or are only weakly fissured). They are only finely rugose with quite coarse, often confluent papillae in the whole surface which form transversal ledges and irregularly warty.
Areoles: Filled with a dense mass of hairs, up to 3 mm wide, sometimes confined to middle of tubercle faces instead of extending to tips.
Flowers: These plants have a woolly crown, from which emerge 3 to 4 cm broad, white to purple (usually pink) 2 times wider than long when fully expanded. Inner perianth-segments oblong-oblanceolate; style and stigma-lobes white.
Blooming time: October, November. Flowers last for 3 to 4 days.
Fruit: Ovoidal, pale green.
Seeds: Black, tuberculate-roughened.
Root: Each plant has a large turnip-like taproot, which lies below the soil surface and serves for water storage.
Ariocarpus fissuratus, Ariocarpus lloydii and Ariocarpus intermedius
The Ariocarpus fissuratus is quite variable in shape of stems and tubercles for its wide area of distribution, ranging from USA (Big Bend region of Texas and along the Rio Grande) to Mexico ( Northern and central to southern Coahuila).
The typical A. fissuratus found on the northern part of it its range is very different from the southern form found in central Mexico that is characterized by rounder not fissured tubercles; this southern form was early described as A. lloydii. However in habitat this species species displays a continuum of characteristics over its range that make difficult to classify A. lloydii as a separate species. The more of less intermediate form found in northern Mexico ( Cuatro Cienegas in south-central Coahuila and Estacion Marte in southern Coahuila) was early named Ariocarpus intermedius. 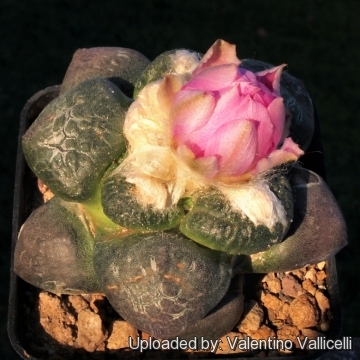 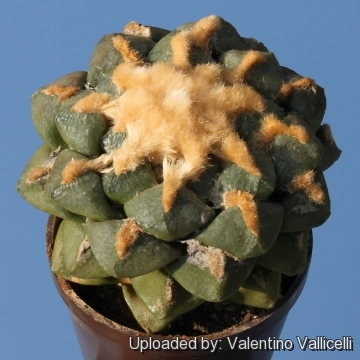 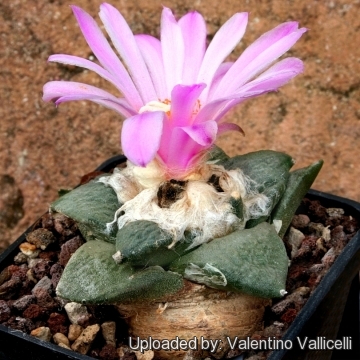 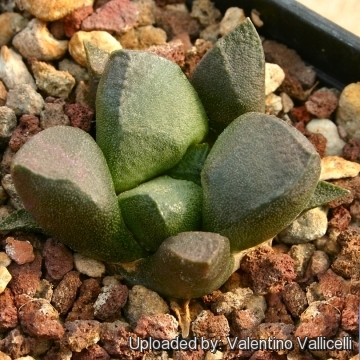 Cultivation and Propagation: It is not too difficult in a greenhouse, although it grows extremely slowly. The plants need deep pots to accommodate the napiform unit formed by the stem base and the rootstock (or they will often simply crack your pots), and a loose mineral soil with a well-drained substrate. They need a good amount of light, a place near the roof of the greenhouse helps drying the pot after watering. This can be done weekly during the summertime, if the weather is sunny enough, with a little fertilizer added. Kept this way, plants will show a healthy, although slow growth. They are frost hardy to -10°C.
Propagation: By seeds, remembering that seedlings dislike strong light and dry conditions, and need to be repotted frequently. Eventually, as they become mature, they reach a maximum size of 25 to 27 cm. However, old plants become senile and have a tendency to succumb to disease and a weak root system. At this stage, as is well known, they die suddenly. So, after they reach 20 cm in diameter grow them slowly, and adopt a new repotting period, using intervals of every 2 - 3 years. Additionally grow them under drier conditions or with stronger sunlight. Plants are often grafted to accelerate growth, as they would generally take at least a decade to reach maturity on their own. But the grafted plants are typically rather tall- growing, compared with plants on their own roots, that are usually flatter to the ground. Ariocarpus fissuratus var. lloydii starts blooming at the age of 8-12 years.