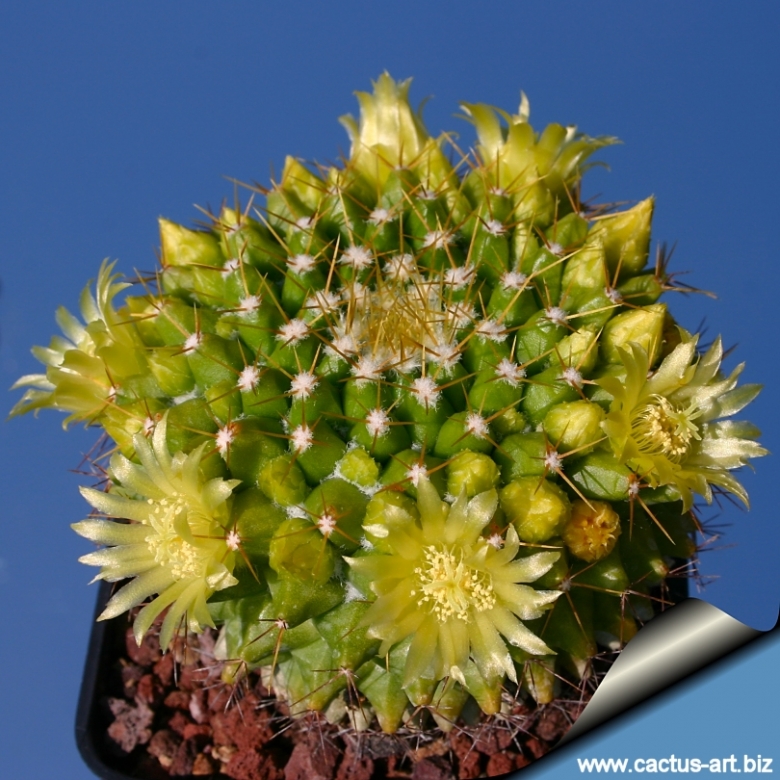 Origin and Habitat: Durango and Sinaloa, Mexico. The species has been reported from southern Sonora, but this is information is doubtful.
Altitude range: 400-2.000 metres above sea level.
Habitat: This species is quite rare in nature, and grows on limestone cliffs (Pilbeam 1999) under the protection of nursery plants and in low dry forest together with Ferocactus schwarzii, Echinocereus subinermis, Opuntia decumbens, Pachycereus pecten-aboriginum, and Agave guadalajarana. The species is poorly known taxonomically and ecologically. Even though there are threats in parts of the species' range, it has numerous large populations and does not currently seem to be declining. The species occurs in inaccessible places so it is not often collected (Sánchez-Mejorada 1972).

Description: Mammillaria marksiana is quite a nice looking cactus with its bright green colour, snow-white wool, sparse yellow spines and bright yellowish-green flowers. With the exception of plants found in the subgenus Dolichothele, no other Mammillaria species approaches the intensity of yellow found in the M. marksiana. Although it can make nice sized clumps it often remains solitary reaching with time a diameter of 12 cm.
Stem: Flattened globose, normally light green, becoming yellowish in bright light. In the wild it can grow up to 6-10 cm high, 5-12 cm in diameter, however in cultivation it can double in size. Milky sap is present.
Tubercles: Unequally swollen-pyramidal, weakly four-sided, bright green, in the axil there is usually lots of snow-white wool, particularly in the blooming area, but without bristles. Tubercle arrangement: With (usually) eight right-winding and 13 left-winding visible contact parastichies.
Spines: Thin, needle-like, golden yellow to brown, difficult to distinguish as centrals and radials, very variable in number, even within the areoles of the same plant, 3 to 8(-11) mm long, depending on age and origin, younger plants have more spines (7-13), older ones have fewer ones (2-5), sometimes 2-13 additional bristle-like, rudimentary spines present.
Flowers: Diurnal, bright greenish yellow, 15 mm long and in diameter. The flowers form in a ring pattern on the previous year’s growth.
Blooming season: Late winter to early spring.
Fruits: Club shaped, greenish or purplish red, up to 20 mm long, ripening in summer.
Seeds: Small, brown.

Subspecies, varieties, forms and cultivars of plants belonging to the Mammillaria marksiana group 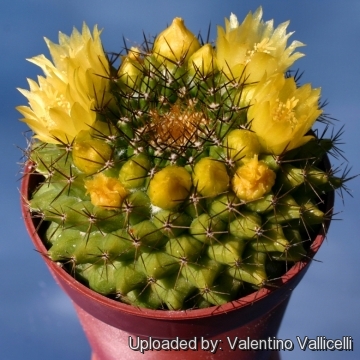 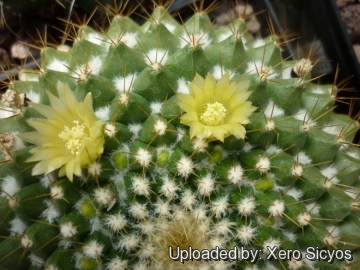 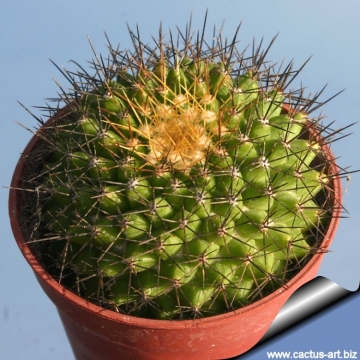 Mammillaria marksiana Photo by: Cactus Art
Send a photo of this plant.

Cultivation and Propagation: An easy and easily flowering species, but not a fast grower, that may make large clumps given the best conditions. Some plants will offset, and moderately large-sized clumps can be produced in a few years.
Water regularly in summer, but do not over-water (rot prone). It shouldn't be watered from above, as it would ruin the fine wool. Use a pot with good drainage and a very porous potting media, and keep dry in winter. Feed with a high potassium fertilizer in summer. Avoid frost. Reputedly sensitive to low temperatures, but less so if kept on the dry side prior to, and during, cold weather. Outside full sun or afternoon shade, inside it needs bright light, and some direct sun. Tends to get yellowish in strong light, which encourages flowering and heavy wool and spine production.
Propagation: Division, direct sow after last frost.