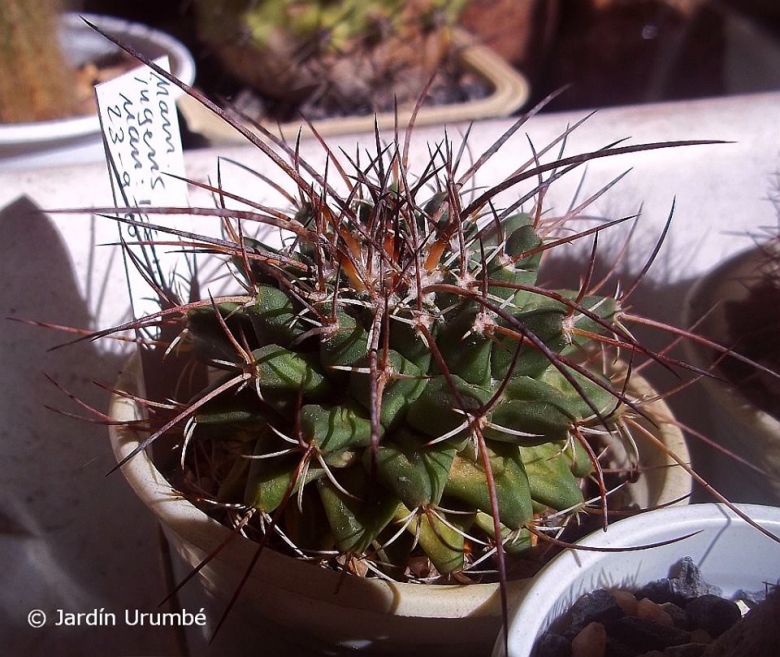 Origin and Habitat: Mammillaria ingens is endemic of the Biosphere Reserve of Barranca de Metztitlán (Barranco Grande, Atotonilco, Barranca del Venado, Barranca de Tolantongo), in the state of Hidalgo, Mexico (Northern America).
Altitude range: This species grows at an altitude of about 1,500-1,700 meters.
Habitat and ecology: In nature this speces lives in the shade of shrubs, in the chaparral togheter with Ferocactus glaucescens and Myrtillocactus geometrizans.

Description: Mammilaria ingens is considers by D. Hunt a mere local form of the widespread and variable Mammillaria polythele. It has a very large solitary globular to cylindrical, green, tuberculate body. If big is beautiful M. ingens, should be one of the belles of the globular mammillarias. It is capable of reaching up to 40 cm in height by 15 cm in diameter; the fact that it remains solitary is, perhaps, advantageous.
Derivation of specific name. Latin ingens - "enormous", characteristic of the size of the species in its habitat. Because the name is so apt, it would be a pity if it were lost into synonymy, simply because plants bearing this epithet are at one end of a variable species, one that some of us years ago learned to accept as Mammillaria tetracantha, but which must now be called Mammillaria polythele subs. obconella. This latter has yellowish brown spines whereas those of M. ingens are dark brown to black and its flowers, typically carmine, are darker than the pinkish blooms of subs. obconella.
Stem: Solitary globular becoming cylindrical up to 40 cm in height for 15 cm in diameter with green epidermis.
Tubercles: Conical , axils and areoles woolly.
Central spines: Looking like radials and often confused with them, only 2 at first later 3-4 or more, acicular, somewhat spreading, unequal, more or less recurved, divergent, and pointing up and down (the lowest is the longest), yellowish, becoming dark brown to black towards the point, 5-25 (or more) mm long.
Radial: Absent or rudimentary.
Flowers: Pinkish red to carmine (without purplish tint according to the original description).
Fruits: Red.

Cultivation and Propagation: In good conditions with careful application of water and excellent ventilation Mammillaria ingens grows without difficulty.
Growing rate: It is a slow growing species that rewards the patient grower with a beautiful displays of flowers since from an early age.
Soil: Requires good drainage provided by a very permeable open cactus soil (With not less than 50% grit content). Reduce the use of peat or other humus sources in the potting mixture.
Repotting: Repot every 2-3 years. Use small sized pots.
Feeding: During the beautiful season enrich the soil using a fertilizer rich in potassium and phosphorous, but poor in nitrogen, because this chemical element doesn’t help the development of succulent plants, making them too soft and full of water.
Watering: Water should be carefully applied and only when the soil is dry to the touch. Allow soil to drain thoroughly before watering again. Additionally, water should not be applied from above, as the feathery spines will retain water and add to rotting problems, but in good conditions with excellent ventilation, in bright light, it usually grows without particular difficulty. Do not water in the winter.
Light: Outside full sun or afternoon shade, inside it needs bright light, and some direct sun. Direct sun encourages flowering and heavy spine production.
Hardiness: Protect from frost. But it's hardy to -5°C if kept dry. A winter rest that allows the plant to shrivel (perhaps losing up to 25% of its summer height) will encourage flowering and long time survival.
Propagation: Only by sowing. Seeds germinate in 7-14 days at 21-27° C in spring, remove gradually the glass cover as soon the plants will be well rooted (ca 1-2 weeks) and keep ventilated, no full sun for young plants! Seedlings grow fairly fast.