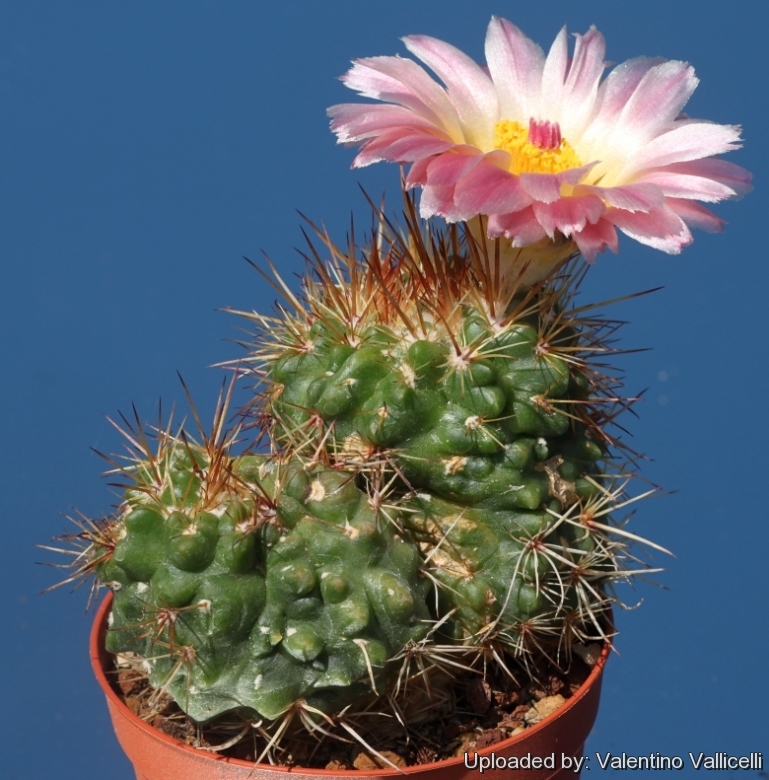 Description: The monstrous form (described in this page) differs from the standard plant only for the ribs that are often fused and strangely tangled among themselves and with either normal and irregularly dome shaped spineless tubercles. The mutate traits are transmissible to the offspring.
The standard Notocactus roseoluteus is is a large growing plant, usually solitary or slowly branching from the base with beautiful flowers.
Growth Habits: Solitary ball cactus to 25 cm in diameter.
Stem: Spherical-flattened that can became shortly cylindrical when old, with a shiny coppery-green with a depressed crown covered in white wool.
Ribs: About 18-22 well defined and spiraling with prominent, rounded tubercles with chinlike protrusion.
Areoles: Deeply seated within a depression between the chins, woolly that become bare when older.
Radial spines: 8-11 thin, flexible and acicular, needlelike, usually less than 10 mm long. whitish with a brownish-red tip.
Central spines: Stouter up to 20-mm long, subulated, brown-reddish, grayish when old.
Flowers: Apical, particularly large, bell-shaped, glossy, pink in shades of salmon with yellow centres, up to 8 cm in diameter.
Blooming season: July through September.
Fruits: Globose, elongating at maturity, thin walled.
Remarks: This plant seems to incorporate some of the features of both Notocactus herteri and Notocactus mammulosus. Both flower colour and spination seem to be midway between the two species. The plant can ultimately reach the size of Notocactus herteri but it flowers at a much smaller size and withstands some winter coldness. 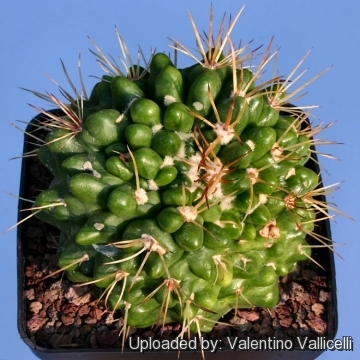 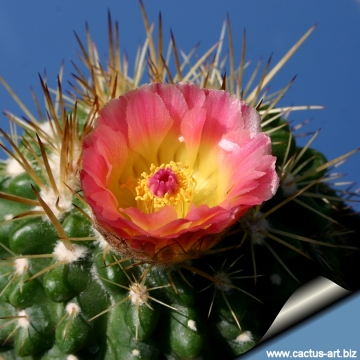 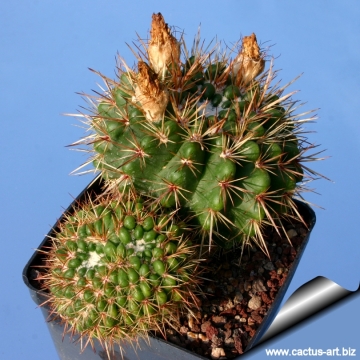 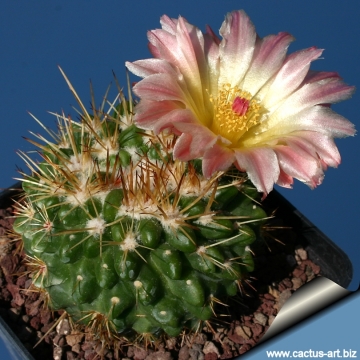 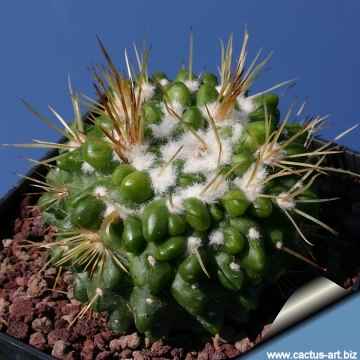 Cultivation and Propagation: Although regarded as a choice and difficult plant it is not too difficult in a greenhouse, but grows quite slowly. The monstrous forms are frequently grafted onto strong columnar cacti but grow very well on their own roots too.
Soil: Use mineral well permeable mineral soil with little organic matter (peat, humus).
Repotting: Repotting should be done every other year, or when the plant has outgrown its pot.
Exposure: It prefers filtered bright light with ample airflow. A good amount sun helps to keep the plants healthy, although slow growth.
Watering: Water sparingly from March till October (weekly during summertime, if the weather is sunny enough) , with a little fertilizer added. Less or no water during cold winter months, or when night temperatures remain below 10° to prevent root loss. It is sensitive to overwatering (rot prone). Best if watered with rain water, an acid compost and iron feed help to delay the onset of basal corking. A well grown plant is a fresh glossy grass-green, contrasting with reddish spines. If the soil is allowed to be dry for too long root loss could follow but equally the same result would occur if the plants are both wet and cold, rot easily if the substrate is wet and cold.
Fertilization: Feeding may not be necessary at all if the compost is fresh then, feed in summer only if the plant hasn't been repotted recently. Do not feed the plants from September onward as this can cause lush growth which can be fatal during the darker cold months.
Hardiness: Suitable for the home or a greenhouse, During winter's rest period they should be dry and cool, it is frost resistant to -4°C but thrives best with additional heat, it likes only a short winter's rest. In the rest period no high atmospheric humidity!! (Temperature Zone: USDA 9b-11)
Crested growth: Unlike 'monstrose' varieties of plants, where the variation from normal growth is due to genetic mutation, crested growth can occur on normal plants. Sometimes it's due to variances in light intensity, or damage, but generally the causes are unknown. A crested plant may have some areas growing normally, and a cresting plant that looks like a brain, may revert to normal growth for no apparent reason. If you have any of the crested part left you need to remove the normal growth and leave the crested part behind this will need to be done regularly.
Propagation: This plant, like other clonal cultivars, may be only propagated vegetatively by grafting or cuttings. Plants are usually grafted onto column-shaped cacti but proved to be able to produce their own roots if degrafted. Cuttings will take root in a minimum temperature of 20° C (but better in hot weather). Cuttings of healthy shoots can be taken in the spring and summer. Cut the stem with a sharp, sterile knife, leave the cutting in a warm, dry place for a week or weeks (depending on how thick the cutting is) until a callus forms over the wound. Once the callus forms, the cutting may be inserted in a container filled with firmed cactus potting mix topped with a surface layer of coarse grit. They should be placed in the coarse grit only; this prevents the cut end from becoming too wet and allows the roots to penetrate the rich compost underneath. The cuttings should root in 2 to 6 weeks. Large crested piece must be placed on the soil surface without burying the plant base down in the soil.