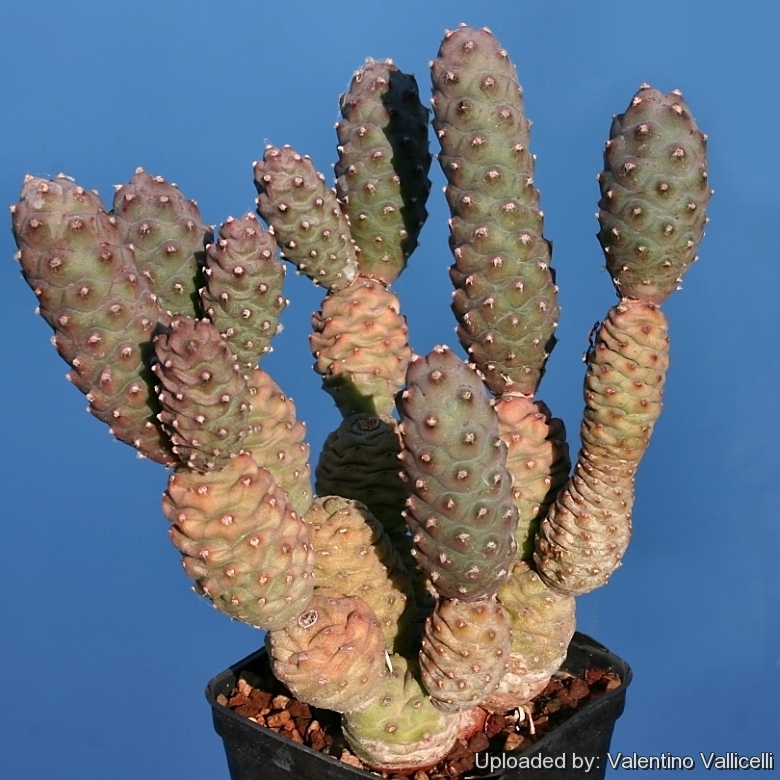 Description: Tephrocactus articulatus var. diadematus, generally included within (as a synonym of)(Tephrocactus articulatus), is a succulent upright shrublet, up to 60 cm tall, 1.2 m spread. The 'inermis' form of this species is a nearly spineless form with no spines and without (or with very few) glochids on the new growth. These usually fall off as it ages.
Stem: It produces dull greyish-blue, greyish-brown to earth-tone coloured pine-cone-like globular to elongated stem segments 2 to 20 cm long, the segment are hardly tuberculate (except in drying) and generally grow longer and narrower than the standard Tephrocactus articulatus. The segments usually grow one or two new segments each year from the stem tips.
Areoles: Large
Spines: The typical Tephrocactus articulatus var. diadematus has flattened papery spines 2 to 5(-10) cm long and numerous reddish-brown glochids, both absent in the forma 'inermis' ( but a few caduceus glochids are sometime present in the youngest areoles)
Flowers: Yellowish-white fading to pink.
Blooming season: Spring.
Fruit: Globose, 1 to 1,5 cm long, dry.
Seed: Corky. 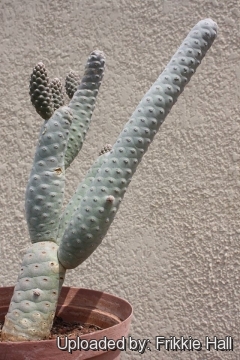 Cultivation and Propagation: This is one of the easiest and safest cactus to grown. It is very heat tolerant and doesn't need shade in summer. It is easy to grow but usually couldn’t get very tall as segment kept falling apart. It is fairly cold resistant and hardy to -9°C depending on the clone, Need full sun, (with insufficient illumination stems get thinner as a result of the lack of sun) The main growing period is spring. It might produce some new segments in the autumn too. Needs good drainage. With plenty of water in summer grows a lot faster... Keep dry in winter but tolerates long, wet, sloggy, cold winters.
Propagation: Cuttings it suckers profusely and is very easy to grow by just knocking off one of the 'cones' and stuffing it in the ground.