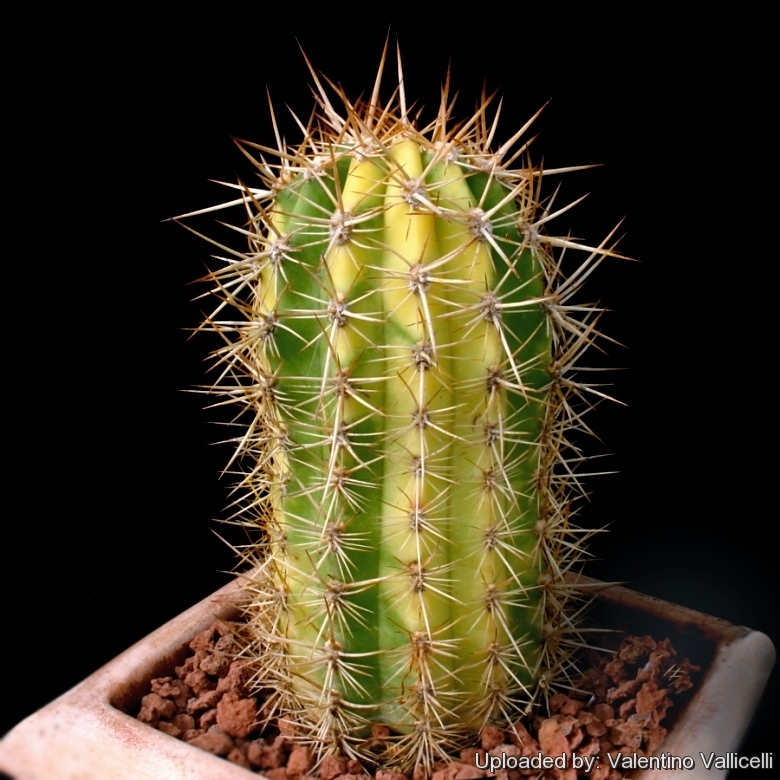 Description: The classical Echinopsis spachiana (a.k.a. Golden Torch Cactus) is a multi-stemmed columnar cactus at first simple, later profusely branching at the base. The rare variegated form has sectors, patches or stripes with distinct shades of yellow. A very few variegated plants sprout unpredictably time by time among normal green seedling and are very rare. Plants with variegated stems are often attractive and highly prized.
Stem: Stem upright up to about 2 m tall, but usually smaller, 5 to 6 cm in diameter, columnar. Epidermis green and yellow.
Ribs: 10 to 15, obtuse, rounded.
Areoles: About 1 cm apart, large, covered with curly yellow wool, turning white or grey as they age.
Spines: Radial spines 8 to 10, 6 mm to 1 cm long, spreading, stiff, sharp, amber-yellow to brown.
Central spines: 1 to 3 yellowish, 12 mm long, stronger and longer than the radials; all the spines later becoming grey.
Flower: Nocturnal, white, about 20 cm long and 15 cm in diameter lasting about 24 hours from one sunset to the following one.
Blooming time: Late spring.