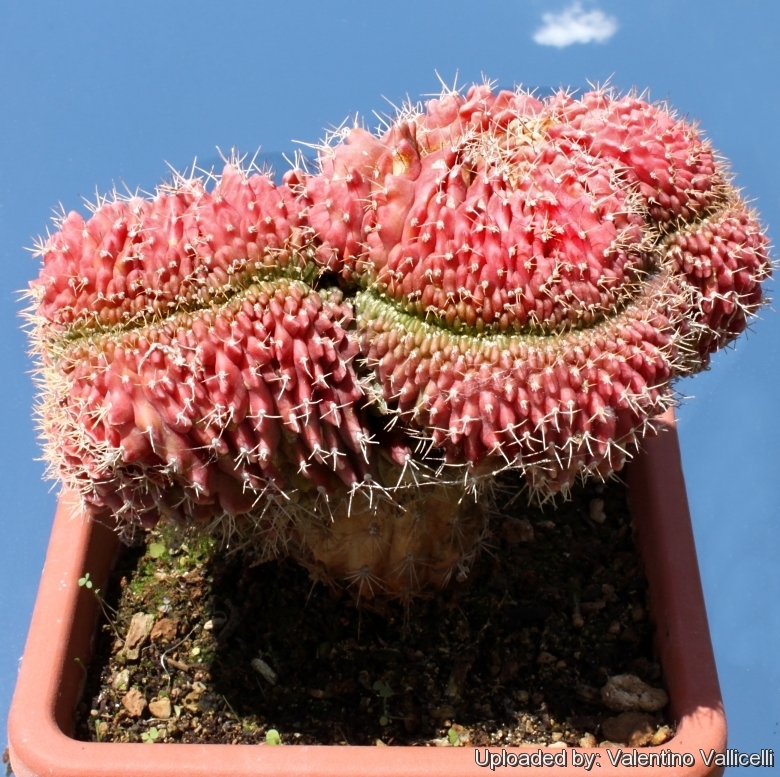 Description: The typical Gymnocalycium anisitsii subs. damsii is an easy to grow and very free-flowering cactus, spherical-depressed to short cylindrical, up to 10 cm tall, 8-15 cm in diameter, green, pale-green or brownish-green, and highly decorative, often with horizontal clear and dark strips.
Crested form: The crested form Gymnocalycium anisitsii subs. damsii f. cristatum, only deviate from the standard species for the stem which is fan shaped up to 30 cm (or more) long with age. It is quite variable in colour and shape and different clones are available. In full sun or under stress conditions the plants tend to take a brownish-red tinge.
Ribs: About 10-11, broad to acute, and more or less notched into chin-shape protrusions or warts.
Radial spines: 5-8 up to 12 mm (or more) long, straight or slightly tortuous, short, nearly useless in terms of defence. Young spine are pastel-white or yellowish with a darker tip, later become pale-grey.
Central spines: Usually absent.
Flowers: From the centre, narrow, funnelform, about 6 cm long. External tepals greenish whit reddish margins, internal tepals white to light pinkish or greenish spreading. Scales on the ovary and flower tube small, scattered.
Blooming season: It produces flowers almost continuously during the year.
Fruits: Oblong, 2,5 cm long, 6 mm in diameter, reddish at maturity.
Remarks: Seems to be a pretty variable plant you might get some other names which are effectively the same plant.... and also not sure all plants identified as this are really this. 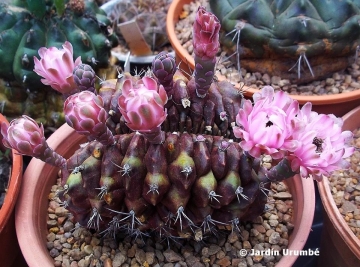 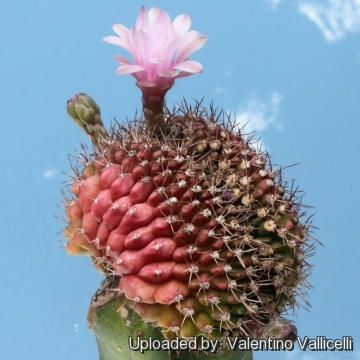 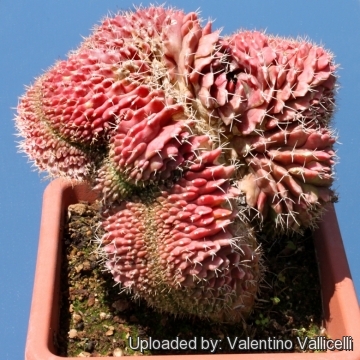 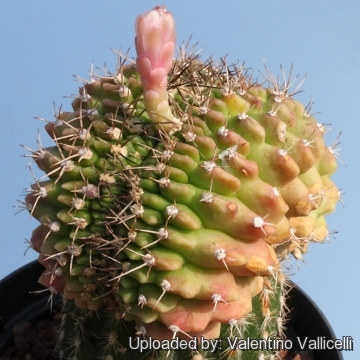 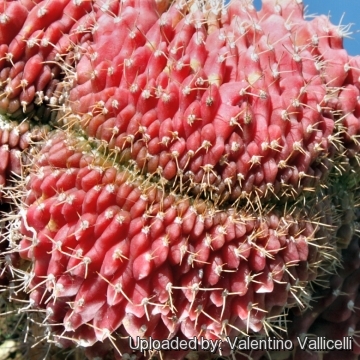 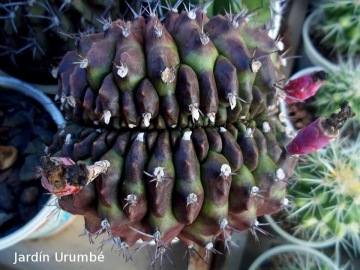 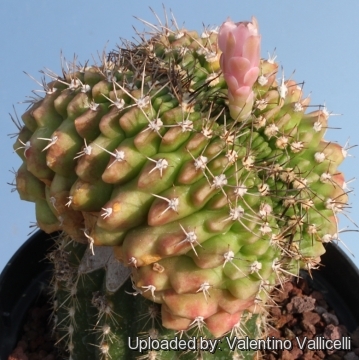 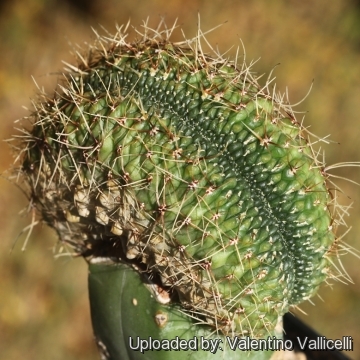 Cultivation and Propagation: Although regarded as a choice and difficult plant is not too difficult in a greenhouse, although grows quite slowly. It is sometime seen as a grafted plant but grows very well on its own roots too.
Soil: Use mineral well permeable mineral soil with little organic matter (peat, humus). Prefer a low pH compost, otherwise growth will stop altogether.
Exposure: The plant tolerates extremely bright situations but enjoys some shade during the hottest part of the day in summer.
Watering: Water sparingly from March till October (weekly during summertime, if the weather is sunny enough), with a little fertilizer added. Less or no water during cold winter months, or when night temperatures remain below 10° to prevent root loss. It is sensitive to overwatering (rot prone).
Fertilization: Feeding may not be necessary at all if the compost is fresh then, feed in summer only if the plant hasn't been repotted recently. Do not feed the plants from September onwards as this can cause lush growth which can be fatal during the darker cold months.
Hardiness: Keep perfectly dry in winter at temperatures from 5 to 15 degrees centigrade. (but it is relatively cold resistant and hardy to -5° C, or possibly colder for short periods) In the rest period no high atmospheric humidity!! (Temperature Zone: USDA 9-11)
Crested growth: Unlike 'monstrose' varieties of plants, where the variation from normal growth is due to genetic mutation, crested growth can occur on normal plants. Sometimes it's due to variances in light intensity, or damage, but generally the causes are unknown. A crested plant may have some areas growing normally, and a cresting plant that looks like a brain, may revert to normal growth for no apparent reason. If you have any of the crested part left you need to remove the normal growth and leave the crested part behind this will need to be done regularly.
Propagation: Grafting or cuttings. Plants are usually grafted onto column-shaped cacti but proved to be able to produce their own roots if degrafted. Cuttings will take root in a minimum temperature of 20° C (but better in hot weather). Cuttings of healthy shoots can be taken in the spring and summer. Cut the stem with a sharp, sterile knife, leave the cutting in a warm, dry place for a week or weeks (depending on how thick the cutting is) until a callus forms over the wound. Once the callus forms, the cutting may be inserted in a container filled with firmed cactus potting mix topped with a surface layer of coarse grit. They should be placed in the coarse grit only; this prevents the cut end from becoming too wet and allows the roots to penetrate the rich compost underneath. The cuttings should root in 2 to 6 weeks. Large crested piece must be placed on the soil surface without burying the plant base down in the soil.