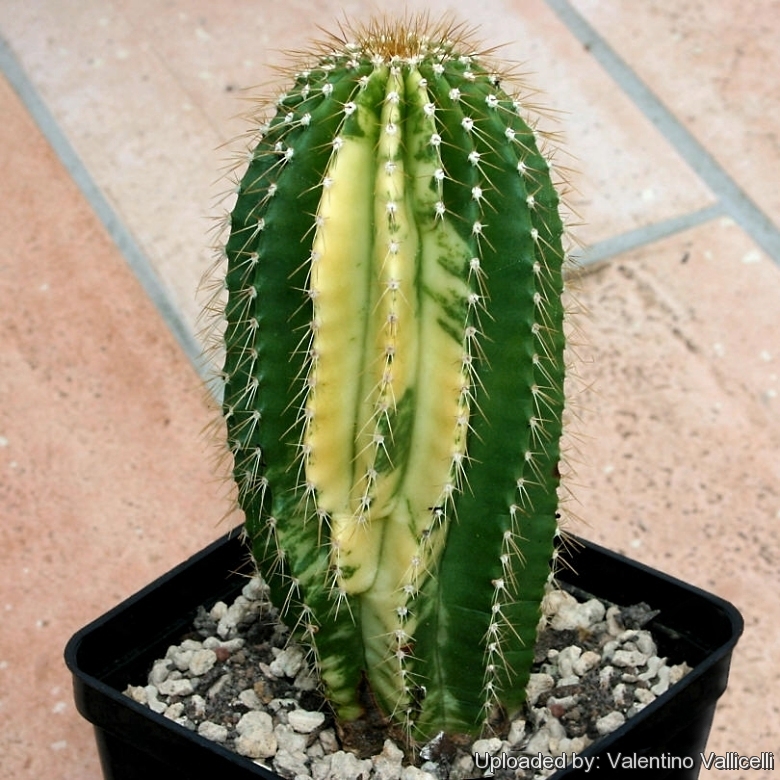 Description: Neobuxbaumia polylopha is a very tall columnar cactus with a thick telephone pole-like stem , 7-12(-15) m tall; Often remain solitary but it can ramify forming a candelabra-like tree with little curved branches. This plant is characterized by the many, narrow, closely spaced ribs.
Variegated form: The variegated form (Neobuxbaumia polylopha f. variegata) has sectors, patches or stripes with distinct shades of yellow. A very few variegated plants sprout unpredictably time by time among normal green seedling and are very rare. Plants with variegated stems are often attractive and highly prized.
Stem: Thick, columnar, deeply ribbed, green and yellow.
Ribs: 10-30 narrow, acute.
Areoles: Small, 4-6 mm apart with yellowish felt.
Spines: Yellowish turning grey as they age, thin, acicular, bristle-like, mostly pointing downward, approx 1 to 2 cm long. As ages, spines tend to fall out.
Central spines: 1-
Radial spines: 4-8-
Flowers: Diurnal, externally green with vivid pink, dark red or magenta (or orage-yellow) petals near the top of the cactus, their ovary is sometimes tuberculate, with small scales and red filaments.
Fruits: Small, cylindrical, greenish approx 4 cm long. They mature rapidly and the seeds can be ready to germinate in only 3 weeks. They open in a quite peculiar way and form something like a star on the stem of the plant with the black seeds in contrast with the off-white colour of the pulp. The fruits are totally exposed to the birds that devour them quickly. They are also edible for humans, tastes smoothly sweet and remembers a very mature plum.
Remarks: Variegated Neobuxbaumia are very rare and priced in cultivation. All variegates are mutants. Something has gone wrong with the cellular structure of the growth tip (apical meristem) of the plant. As a result of this mutation, chlorophyll is missing from some or all layers of the plant epidermis. The odd variegate appears in many seedling batches in a small percentage, and is generally separated from normal plants. Variegated plants grow more slowly, and are generally smaller than non-variegates of the same species. Coloured areas are also generally weaker, and more susceptible to fungus, sunburn and other defects. A large well grown variegate Neobuxbaumia is truly an achievement. These are harder to grow well than they appear.

Cultivation and Propagation: Neobuxbaumia are of easy culture and can grow 15-20 cm a year. They are cold intolerant. Make sure they are not exposed to freezing temperatures ( Hardy to -2°C) or they may die. They need a well drained soil mix. It appreciates abundant water during the summer and, during its growing period but allow to dry fully before watering again, it is possible to add a fertilizer 6-6-18 from time to time. During the winter months they should be rather kept dry. Since they are rapid growers, they need plenty of space for their roots. Repotting should be done every other year, or when the plant has outgrown its pot. Sun Exposure: Light shade when young, full sun later. In mild climate they can be grown in rock gardens in full sun, in dry and sandy soils.
Special cares for variegated forms: In the summer it is best to avoid direct sun during the hottest hours of the day (but they benefits from morning sun, that helps to produce strong and colourful spines). In case of cultivation in full sun it is best to plant with the variegated spot facing northeast, so it gets the least amount of direct sunlight as possible.
Propagation: Usually by Seeds (Seeds should be sown in a well-drained soil mix. Surface sowing is the best; seeds germinate in 14-28 days at 25° C, or from cuttings in spring (let them dry till the ends callous well). Then replant them in fresh cactus soil that is ever so slightly moist, and keep it that way till they root)