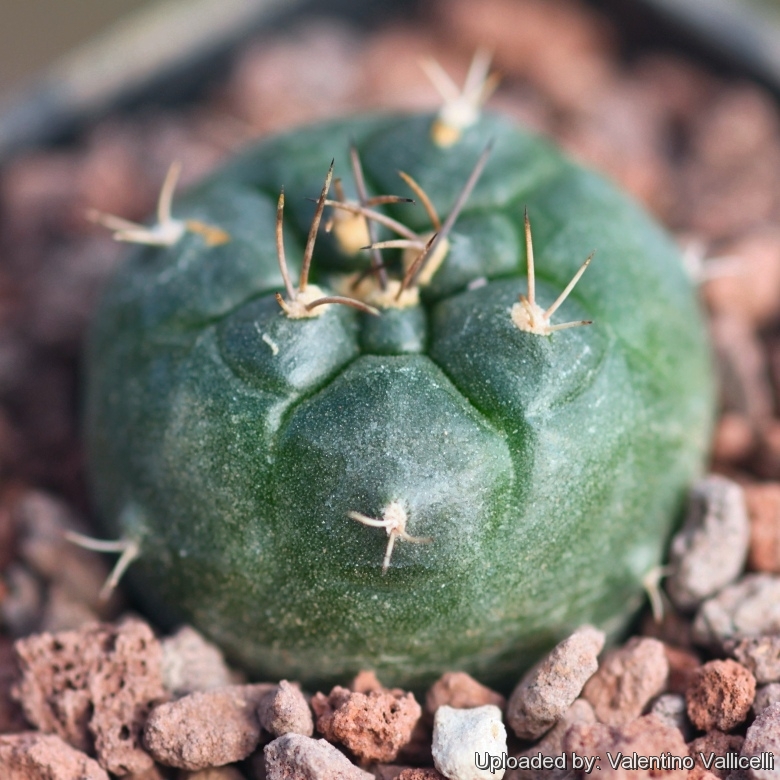 Origin and Habitat: Matucana eriodisca is a controversial plant of dubious origin, often considered synonym of Matucana oreodoxa which is only known from one location in the Valley of the Rio Puchca, Ancash, Peru.
Habitat and Ecology: The species grows in inter-Andean valleys and is quite uncommon.

Description: Matucana eriodisca is an unpublished catalogue name (nomen nudum) used by some seeds collectors and succulent traders to indicate a naturally occurring variant of Matucana oreodoxa (or may be of Matucana paucicostata). It is a beautiful species and looks very much like the standard Matucana oreodoxa. However the two plants are quite similar and it is hard to tell apart one from the others. For its particular shape it vaguely remembers of Lophophora.
Habit: It is a small solitary cactus species that may slowly branches from the base.
Stem: Flattened globose to short columnar, grass green, dull grey-green to dark green, 8-15 cm tall, up to 8 cm in diameter.
Ribs: 7-12, Broad, flattened. Forming round tubercles, with transverse grooves.
Roots: Large taproot.
Radial spines: 4-10, 10-30 mm long, cream coloured, brownish to blackish, becoming grey, flexible, straight or somewhat curved. They are fragile and detach easily, so the older basal parts of the stem are often naked.
Central spines: None or sometime 1 or 2, 15-40 mm long.
Flowers: Slender, infundibuliform, radially symmetrical, bright orange-red, 8-10 cm long and 3-5.5 cm in diameter.
Fruits: Oval, pale green, about 8 mm in diameter.

Cultivation and Propagation: Matucana eriodisca grows slowly in its natural habitat, but in greenhouses or grafted it grows quickly, with tissues that are less firm.
Watering: It is noticeably sensitive to excess moisture, as the roots are prone to rot. Let the soil dry out between watering. Keep dry in winter.
Exposure: It benefit from a good light but not severe sunlight.
Soil: Grow in rich, porous soil. It needs good drainage.
Re-potting: Re-pot in the spring when its roots become cramped. Generally, it should be re-potted every other year, in order to provide fresh soil. However, this doesn't necessarily mean it will need larger containers. After re-potting, do not water for a week or more.
Special need: It is suited for airy exposures. Provide very good ventilation. Nearly all problems occur as a result of overwatering and poor ventilation, especially when weather conditions are dull and cool or very humid. It must be grown in a very dry atmosphere.
Hardiness: It likes warmth, recommended minimum winter temperature 5° C.
Pests & diseases: These cacti may be attractive to a variety of insects, but plants in good condition should be nearly pest-free, particularly if they are grown in a mineral potting-mix, with good exposure and ventilation. Nonetheless, there are several pests to watch for:
- Red spiders: Red spiders may be effectively rubbed up by misting the plants from above.
- Mealy bugs: Mealy bugs occasionally develop aerial into the new leaves and flowers with disfiguring results, but the worst types develop underground on the roots and are invisible except by their effects.
- Scales, thrips and aphids: These insects are rarely a problem.
- Rot: Rot is only a minor problem if the plants are watered and “aired” correctly. If they are not, fungicides won't help all that much.
Reproduction: From seed, since the plant rarely produces plantlets, or grafted. The seeds can be sown in pots of fine, well-drained sandy soil, any time during the spring when temperatures are warm. Cover the seeds with a fine layer of grit and water from below with a fungicide to prevent damping off. For the 1-2 weeks cover the pots with a sheet of glass/clear perspex to keep the humidity levels high. Remove the glass and replace it with light shade-cloth and mist once or twice a day for the next two weeks after which most seeds should have germinated. From then on mistings can be reduced to every second and then every third day as the little plants grow. The seedlings should not be disturbed until they are well rooted after which they can be planted separately in small pots. Sometimes it is grafted to avoid root rot problems as plants grafted on an hardy stock are easy to grow and no special skill is required.