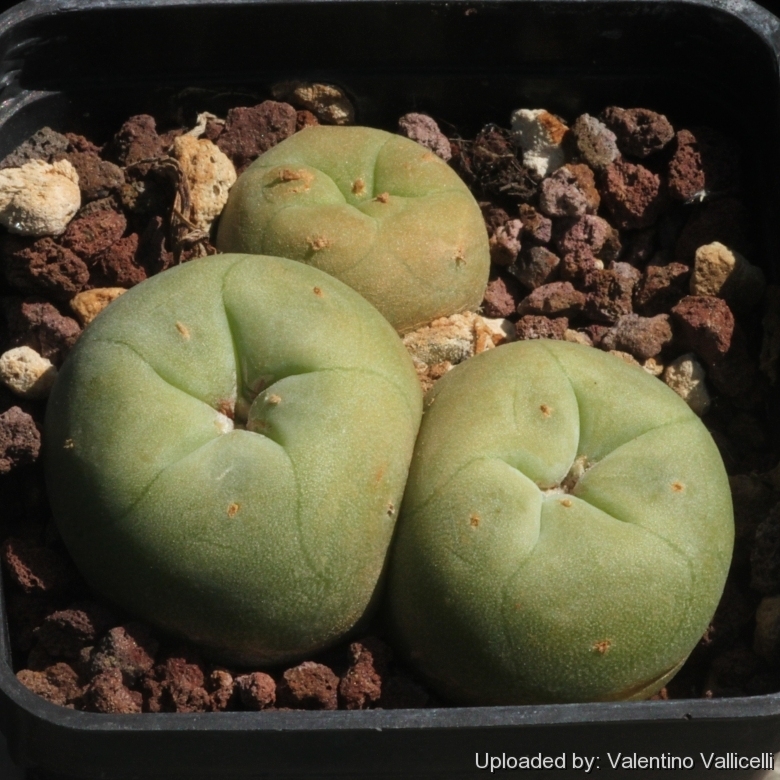 Description: Globular spineless cactus with large tap root.
Stem: Differs from Lophophora diffusa by being a characteristically green silver colour, and the ribs are strongly in relief with hemispherical tubercles.
Root: It has a huge fat underground tap-root.
Flowers: Cream to light yellow. 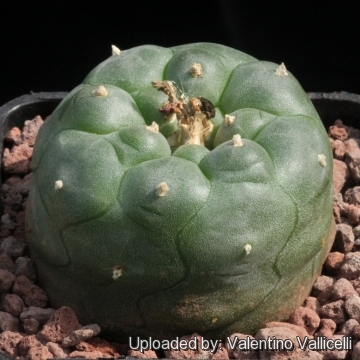 Cultivation and Propagation: Slow growing, it requires half-shade in summer, full sun the rest of the year. Grow it in a narrow and deep container to accommodate the tap root. They are very rot prone, so use highly gritty compost with much drainage.
Waterings should be rather infrequent, to keep the plant compact and not to become excessively elongated and unnatural in appearance. Watering it properly is often difficult, because this plant tends to crack open or rot if over-watered. The fact that the plant retracts into the soil and assumes a grey-green colouring between waterings is perfectly natural, and doesn’t cause any damage. Like other arid zone cacti, they require a dry and cool over-wintering; otherwise they may succumb to rot. This also promotes flowering. Assure good ventilation.
Propagation: Seeds. Seeds should be sown in spring, in sterile cacti mix. Cover with a humidity dome or plastic wrap and leave in a warm spot in 50-75% shade. Fluctuating temperatures are best (ie. high day temperature and low night temperature), as they simulate the desert environment. Keep constantly humid, as seedlings cannot survive if too dry. Seedlings will emerge in 7-21 days and can be grown in the same environment for a number of months. Mulch with thin layer of small quartz gravel (1-2mm diameter). This helps them stay upright, hinders algae growth and regulates moisture. As they get older, the watering can become less frequent. Potting up can be done when 5-10 mm in diameter.