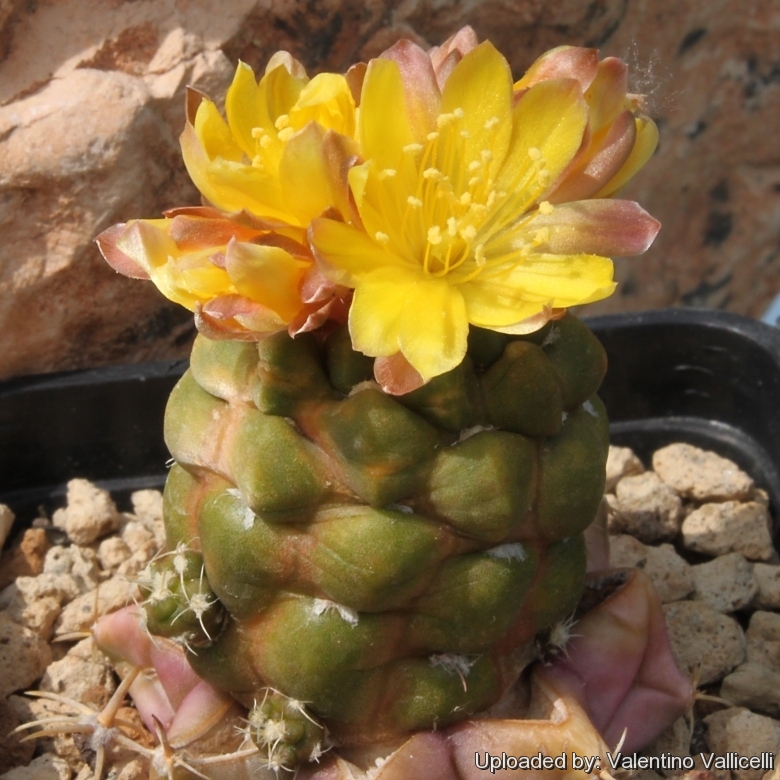 Description: The standard Cintia knizei is a solitary dwarf, flat to globose cactus (in the wild), that become cylindrical when it is grafted. The variegated cultivars (Cintia knizei f. variegata) has sectors, patches or stripes with distinct shades of orange.
Stem: Olive-green and orange, up to 5 cm in diameter, globose, covered with large rounded podaria. Apex woolly. The colour can vary depending on the time in the growing season and the amount of sun and water. The base becomes corky with age.
Areoles: The areoles are sunken between the podaria, and are woolly.
Spines: 5-6 short spines only occur on juvenile areoles; adult plants and pericarpel are spineless.
Roots: Deep, tuberous, carrot-like, up to 10 cm long.
Flower: Diurnal, yellow 3-4 cm in diameter on the stem tip, they resemble those of a Copiapoa.
Fruits: Elonged, dry with a thin pericarp, that remain for a long time incorporated within the stem.
Seeds: Black 1,2 mm long 0,7 mm large, the surface is convex and smooth.
Blooming season: Spring.
Remarks: Variegated plants grow slower and are generally smaller than non-variegates of the same species. Coloured areas are also generally weaker, and more susceptible to fungus, sunburn and other defects.