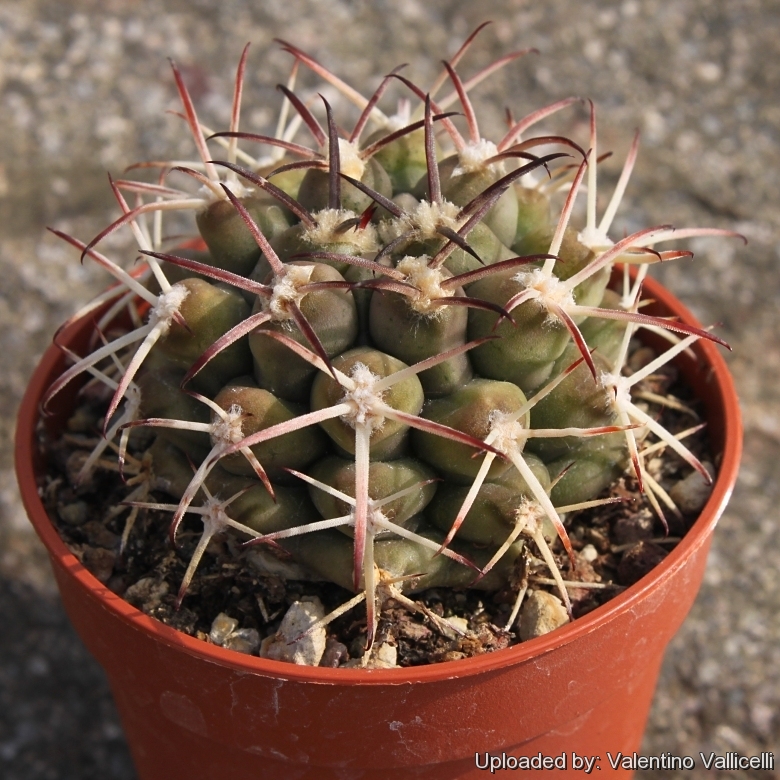 Origin and Habitat: Córdoba, Northwest Argentina.
Habitat: It is native of the Chaco forest and of the high steppes at 400-1500 m of elevation, where summer rainfall averages about 61 cm. It is often found growing along with Allenrolfea patagonica and Aspidosperma quebracho-blanco. It is tolerant of shade and it is cold hardy. In habitat it freezes every year.

Description: Gymnocalycium delaetii (Gymnocalycium schickendantzii subs. delaetii) is a nice looking solitary barrel cactus that appears to be closely related to Gymnocalycium schickendantzii, but with more rounded tubercles which are even more projecting and with longer reddish buds.
Stem: Depressed globose to globose blue-green, dark-green or olive green up to 10 cm high and 10(-15) cm in diameter.
Ribs: 5-8, flat, with separate tubercles, with transverse furrows.
Areoles: Few, fuzzy white.
Spines: 6-7, 1-1,5 cm, strong, curving outward, somewhat flattened, black, brown, reddish grey to yellowish with dark tips (often paler in the bottom side) turning to ash colour as they age.
Flowers: The plant produces club-like purple buds on the older areoles on the side part of the stem, which develop into pinkish rose (rarely red) flowers, to 5 cm long and 7 cm in diameter. Often when full open the flowers remain almost tubular in shape and fail to open as broadly as other species do.
Fruits: Ovoid, green.

Subspecies, varieties, forms and cultivars of plants belonging to the Gymnocalycium schickendantzii group

Notes: The spines are very peculiar somehow flattened dark brown in the upper face and grey below. 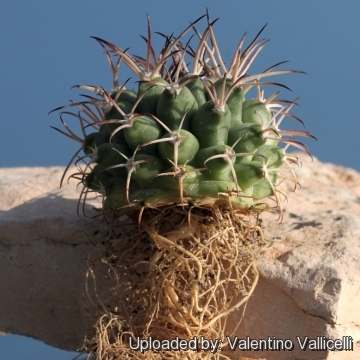 Cultivation and Propagation: Keep this plant almost dry in winter at a minimum temperature of 0°C, prefer a low pH compost otherwise growth will stop altogether. The plant tolerate extremely bright situations but are likely to suffer from sun scorch or stunted growth if over exposed to direct sunlight during the hottest part of the day in summer. Repotting should be done every other year or when the plant has outgrown its pot.
Propagation: Seeds (It don't produces offsets).
Seed Collecting: Permit fruit to ripen, fruit must be significantly overripe before harvesting seed; clean and dry seeds.