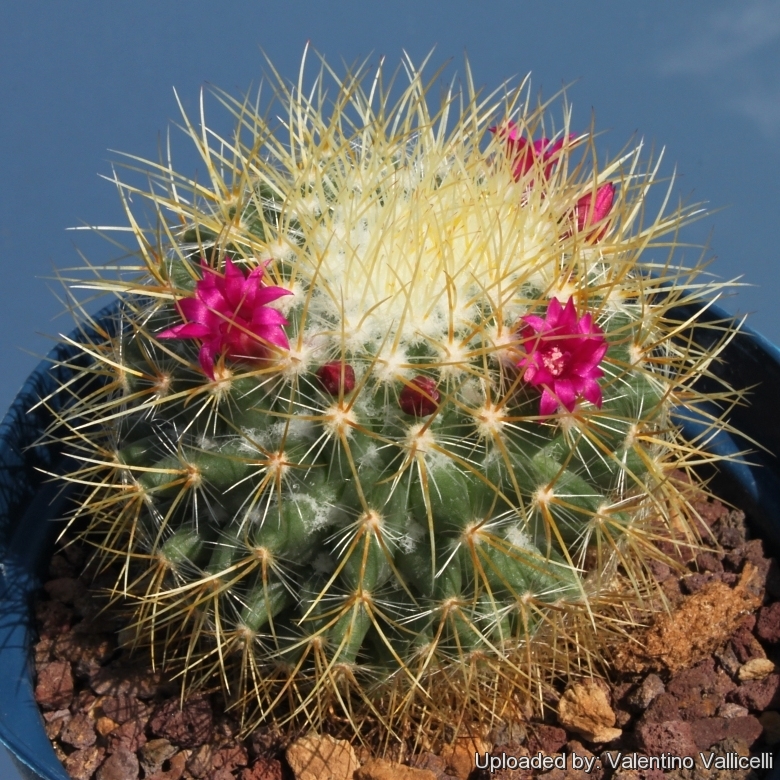 Origin and Habitat: Mammillaria pringlei has a very restricted range (extent of occurrence = 7,000 km2) and is present in only three known locations in the State of Mexico, Mexico. Reported disjunct populations in the state of Veracruz and outside of its range in the state of Mexico are likely from other species within the Mammillaria rhodantha complex.
Type locality: Cited as San Luis Potosi, but doubtless Tultenango Canyon, state of Mexico, according to Pringle, who collected the type.
Altitude: (1200)2000 to 2300(2650) metres above sea level.
Habitat: This species is common on rocks on steep canyons valleys and cliffs in pine-oak forests together with Mammillaria uncinata, Stenocereus queretaroensis, Stenocereus dumortieri, Myrtillocactus geometrizans and Ficus petiolaris. It is experiencing declines from the unsustainable collection of its flowers and whole individuals for use as a Christmas decoration.

Description: Mammillaria rhodantha subs. pringlei, best know as: Mammillaria pringlei, is one of several yellow- or golden/amber-spined variants of Mammillaria rhodantha.
Habit: It is generally a solitary ball cactus that eventually divides dichotomously (branches out by splitting each head).
Stems: Usually globose or hemispherical, somewhat flat and woolly at the top, but sometimes short-cylindric, approx 6-20 cm tall and 6-15 wide.
Tubercles: Dull greyish green, terete, conic, 6 to 10 mm long; axils of tubercles woolly and setose.
Roots: Has long fibrous roots.
Spines: It is one of the few Mammillaria that is completely covered with yellow spines. The spines on this species seem to radiate light, almost making it appear to glow.
Radial spines: 18 to 22, setaceous, 5 to 8 mm long white and spreading.
Central spines: 5 to 7, much stouter and longer than the radials, 2 to 2,5 cm long, more or less recurved (those from the upper areoles curved backward over the apex of the plant), deep yellow to golden in colour.
Flowers: The small deep red flowers are 8 to 10 mm long.
Blooming season: This plant probably has one of the longest non stop blooming streak of any cactus. Flowers can appear any time of the year, mostly from early spring to late summer.
Fruits: Borne in a circle near the middle of the plant, oblong, 12 to 15 mm. Long.
Seeds: Small, brown. 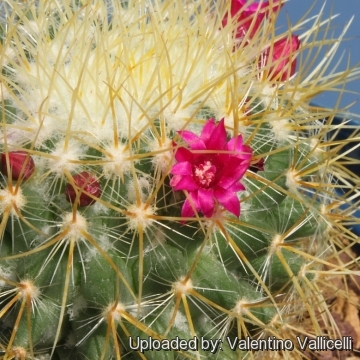 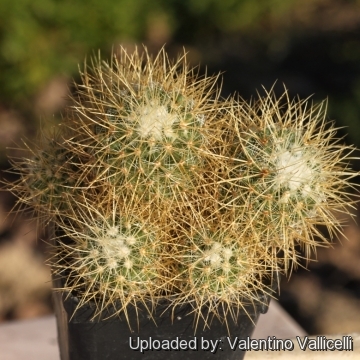 Cultivation and Propagation: It is a relatively easy plant to grow, both grafted or on its own roots. During the summer it is best to keep the plants outside, where the temperature can rise to over 30 C with no harm to the plant. Furnish good drainage and use a an open and free draining mineral compost that allows therefore roots to breath. They should be kept almost completely dry during the winter months. From March onwards the plant will begin to grow, and watering should be increased gradually until late May, when the plant should be in full growth.
Water regularly during the summer, so long as the plant pot is allowed to drain and not sit in a tray of water. During hot weather you may need to water the plants more frequently, as long as the plant is actively growing. From late September watering should be reduced, to force the plant to go into a state of semi-dormancy. By October you should be back in to the winter watering regime.
It needs full sun, avoiding only the harshest summer sun. If kept too dark, plants may become overly lush and greener, and could be prone to rot, due to over-watering.
Feeding may not be necessary at all if the compost is fresh. Then feed in summer only if the plant hasn't been repotted recently. Do not feed the plants from September onwards, as this can cause lush growth, which can be fatal during the darker cold months. Grown specimens resist to -4°C for a short time.
Propagation: By vegetative propagation grafting or stem cuttings from adult plants.