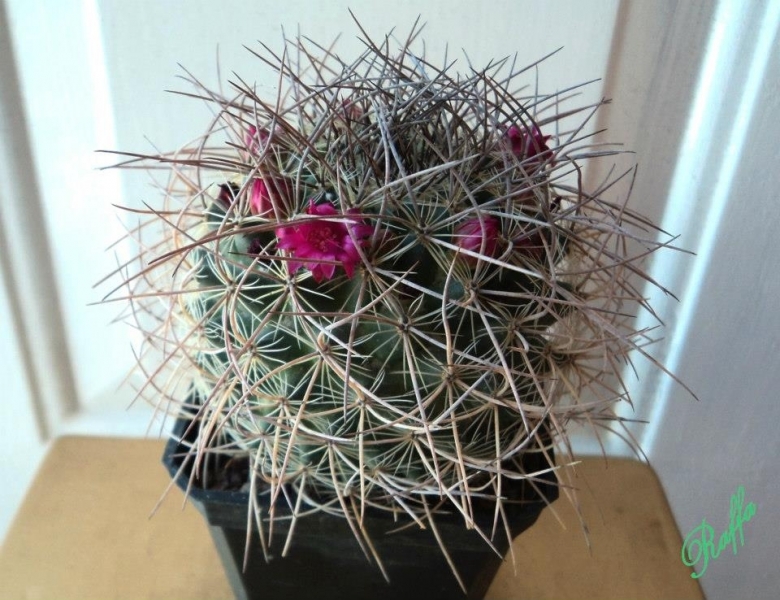 Description: Mammillaria rhodantha is a shortly columnar cactus that characteristically divide dichotomously with age forming large clumps. The spines are the more variable of the trait and a great variety of forms can be found in cultivation.
Stem: Short cylindric or clavate, dark green, usually ranging from 15–30(-40) cm in height and up 8-10(13) cm in diameter. White wool can be seen growing on the top part of the plant body.
Tubercles: Conical to cylindrical, without latex.
Axils: With fine bristles.
Central spines: About 4 to 6 straight, or somewhat curved up to 1,5 cm long, vividly coloured reddish-brown but also straw-coloured or golden yellow. The bottom half of the cactus has spines that are white or grey and appear to be dying.
Radial spines: Approximately 16 to 24, 3-10 mm long, glossy-white or yellowish.
Flower: Deep-pink to a purple colour, 20-23 mm long and 15-18 mm in diameter, stigmas usually purple.
Blooming season: The species flowers for very long periods of time. It starts blooming in the spring and continues to bloom until summer, but some plant will produce another ring of flowers in late October or even November.
Fruit: 15-25 mm long. Cylindrical to club shaped, purplish-pink frequently greenish at the base.
Seed: Brown to orange-brown. 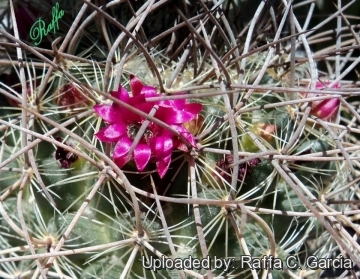 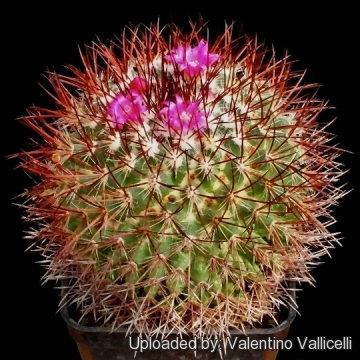 Cultivation and Propagation: It is a rapid growing species that will form large clumps rather rapidly when compared to other Mammillaria species. Needs lots and lots of space to grow. Water regularly in summer, but do not overwater (Rot prone) Use pot with good drainage and a very porous potting media, keep dry in winter. Feed with a high potassium fertilizer in summer. It is quite frost resistant if kept dry, hardy as low as -5° C (some reports give it hardy to -12°C) Outside full sun or afternoon shade, inside needs bright light, and some direct sun.
Propagation: Division, direct sow after last frost.