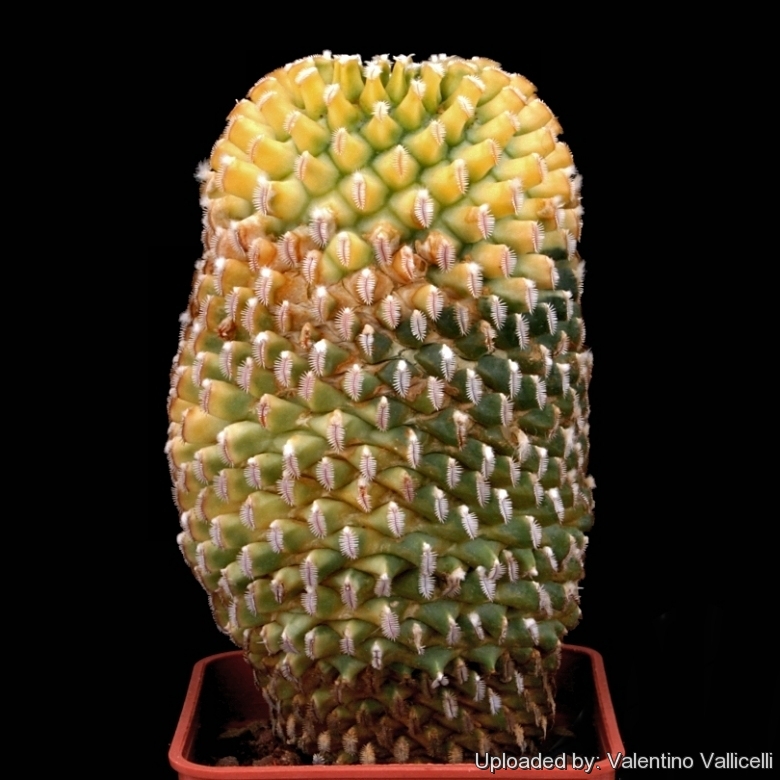 Description: Turbinicarpus pseudopectinatus is a solitary small geophytic cactus with many small spirally-arranged tubercles tipped with numerous tiny white spines in a comb like formation.
The forma variegata differs from the standard species for its stems with yellow strips or patches. Except for the stems colour it is identical in shape and size to the standard species.
Stem: Globular dull green, 3 cm tall, 4 cm in diameter, barely showing above the ground. Apex with short white hair; spirally-arranged tubercles.
Spines: Numerous white in a comb like formation (pectinated), 1,2 mm long.
Root: Tuberose and usually bigger than the stem itself.
Flowers: One to 5 pinkish white to bright pink with darker magenta or reddish-brown mid-veins.
Blooming season: Blossoms are expected early in spring. Flowers can be expected on Turbinicarpus pseudopectinatus seedlings after perhaps two or three years if they are grown well in plant that are only 1,5 cm in diameter, while the flower is 4 cm long.
Fruit: Small tannish-green.

Subspecies, varieties, forms and cultivars of plants belonging to the Turbinicarpus pseudopectinatus group 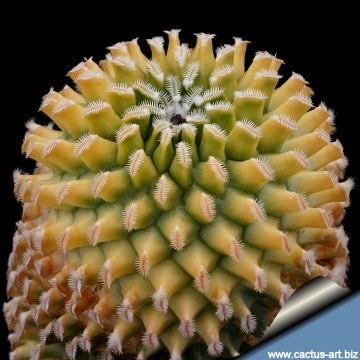 Cultivation and Propagation: Cultivation: Variegated cacti are regarded as choice and difficult in cultivation, but despite that many of them are relatively easy to grow. But be aware that they cannot tolerate prolonged exposure to direct sun light (especially during the hottest summer days), so grow them in half-shade or under filtered sun. They are sometime seen as grafted plants, but many grow well on their own roots, too.
On the contrary, the albinos can survive only if grafted on a strong green base.
Use mineral well-permeable substratum with little organic matter (peat, humus). Water sparingly from March till October and keep perfectly dry in winter at temperatures from 5 to 15 degrees centigrade. (In general these plants are more tender and cannot endure freezing temperatures ) In the rest period no high atmospheric humidity!!
Propagation: Almost usually by seed. Plants are often grafted onto column-shaped cacti.