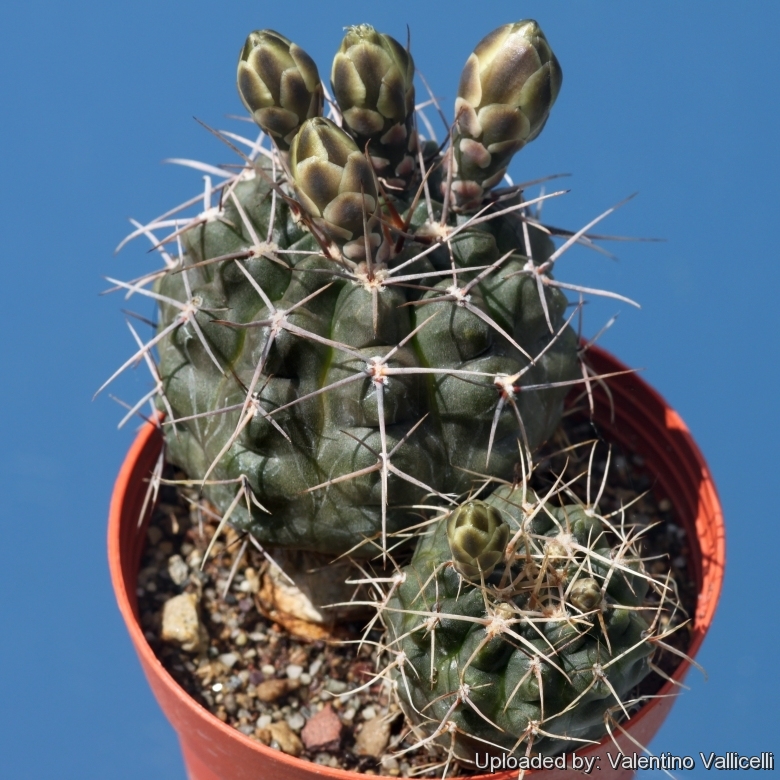 Description: Gymnocalycium gibbosum var. nigrum a.k.a. “Black Chin Cactus ” is one of the controversial forms of the very variable Gymnocalycium gibbosum. The variety “nigrum” has jet- black spines on a nearly black body and large off-white flowers about 6 cm tall. However it look very similar to other varieties of Gymnocalycium gibbosum which are linked one to each others by populations of plants with intermediate characteristics. Nowadays all them are thought to belong to a unique polymorphic species. Such variations has led to establishment of several unnecessary names for this species.
Habit: It is a small solitary cactus.
Stem: Deep glaucous-green, dark olive green to grey-black, discoidal that became elongate with time 10-25 cm tall, up to 12 cm in diameter, the apex is slightly woolly. This stem tends to become rather greener with age especially if grown somewhat shaded.
Ribs: 10-16 straight, divided in well distinct angular ribs.
Areoles: Greyish, elongate.
Radial spines: 5 to 7 or more, less 20-25 mm long mm long slightly bent against the plants body, fairly stout, blackish, becoming whitish-grey with a black base as they age.
Central spines: 0-2 very similar to the radials.
Flowers: Infundibuliform in the nearest periphery just around the apex 45-60(-80) mm long, 60-65 in diameter. Tepals ivory white with a brownish mid rib or occasionally reddish, throat greenish with a basal reddish area. Style white-greenish, stigma white. Anthers cream coloured.
Fruits: Globate or fusiform, 20-40 mm long green with white bordered scales.