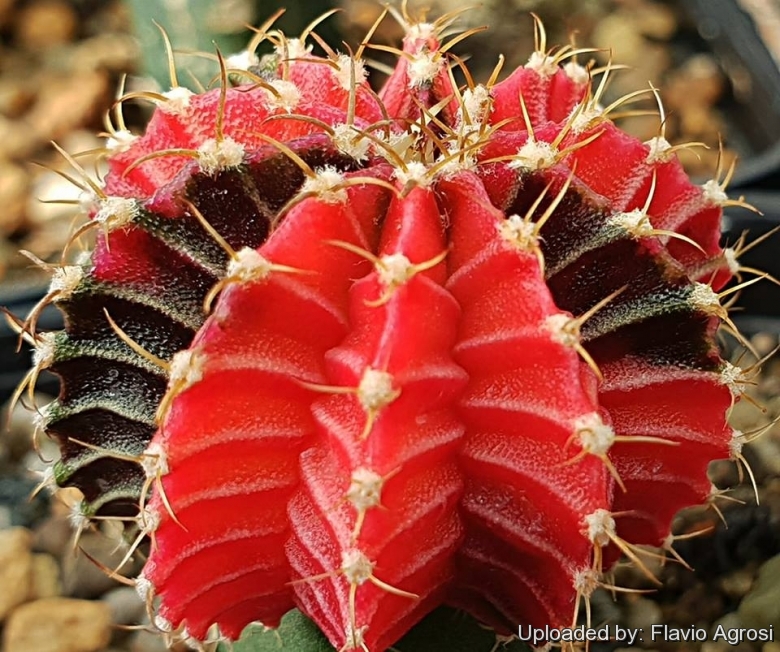 Description: Gymnocalycium mihanovichii "NISHIKI" or "HIBOTAN NISHIKI" comprises a large group of popular mutants, characterized by variegated only partially de-coloured stems. The more or less coloured bodies have parts, strips, or sectors with few chlorophyll or even no chlorophyll at all, are red but also orange, dark purplish, yellow or even white) with normal coloured parts. Some of this colourful plants (those with some chlorophyll) are able to grow on their own roots and are very beautiful and priced by collectors.
Ribs: 8-14, very prominent, and sharp banded whit strong dark brown markings especially when young, and these sometimes have cross-bands of lighter colours.
Radial spines: 3-6, acicular, to awl shaped, light to dark brown, somewhat twisted, 0,7-1 cm long.
Central spines: Usually absent.
Flowers: Pale-pink to purplish-pink, 6-7 cm long.
Fruits: Gray-green to pinkish-red up to 4 cm long, diameter 1 cm.