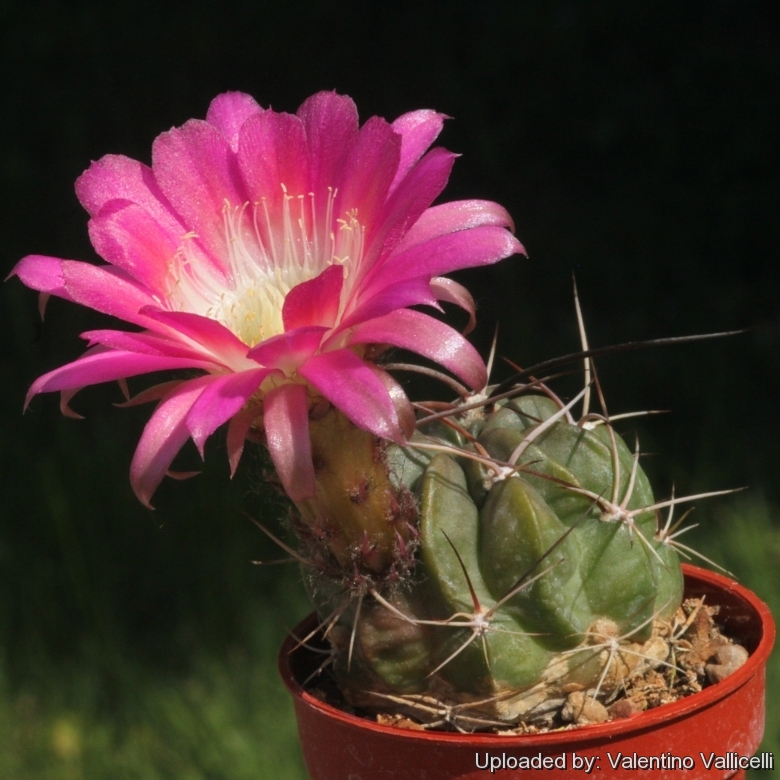 Description: Echinopsis pentlandii subs. Larae, better known as Lobivia larae, is one of the many geographical or morphological form of Echinopsis pentlandii. Many variant of Echinopsis pentlandii was early classified as different independent species, but nowadays all this plants are considered part of a multiform species, where each form is linked to others by populations of plants with intermediate characteristics. Echinopsis pentlandii subs. Larae has distinctive dark purple, to pink lilac flowers with a paler throat. The stems are hemispherical and quite flattened with comb shaped radial spines, slightly curved and thickened at the base.
Habit: Simple at first it slowly ramifies from the base to form clusters.
Roots: Tap root.
Stem: Low thick flat, or spherical, but usually broader than high, somewhat umbilicate at apex, bright green, dark green, up to 4 cm tall and 12 cm in diameter.
Ribs:9–12, sharp edged, broken into long acute, hatchet-shaped, tubercles, separated by acute intervals.
Areoles: Felted about 1,5 cm apart.
Spines: Variable, stout, all radial or sometime with one central.
Central spines: Usually absent.
Radial spines: 9–12, somewhat pectinated, slightly curved backward, pale grey to whitish, thickened at the base.
Flowers: Diurnal, funnel shaped, dark purple to pink lilac, with a usual clearer centre, 6 cm long, 5 cm diameter. Tube relatively stout up to 1 cm in diameter. Inner perianth-segments, narrowly obovate, abruptly acute, spreading. Stamens and style much shorter than the inner perianth-segments. Style below green, above yellow. Scales on ovary and flower-tube lanceolate with short hairs in their axils.
Blooming season: Blooms are produced in spring and remain open for about three days.
Fruit: Subglobose, 10 to 12 mm in diameter. 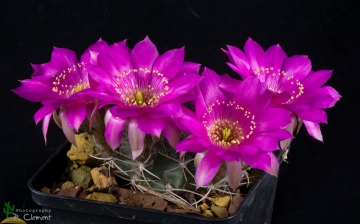 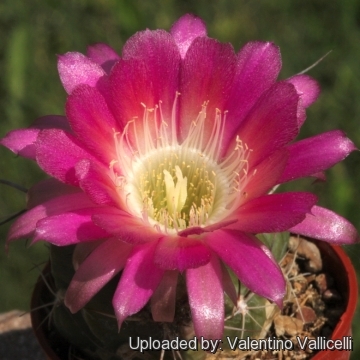 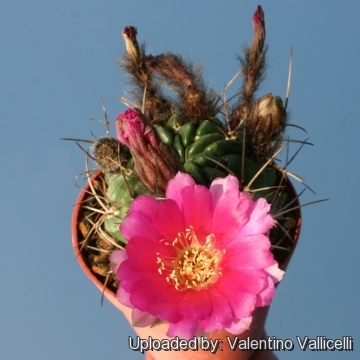 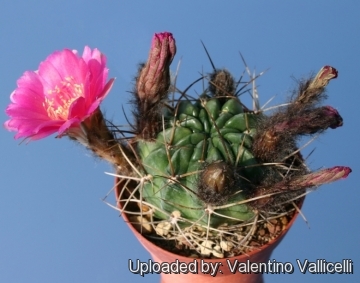