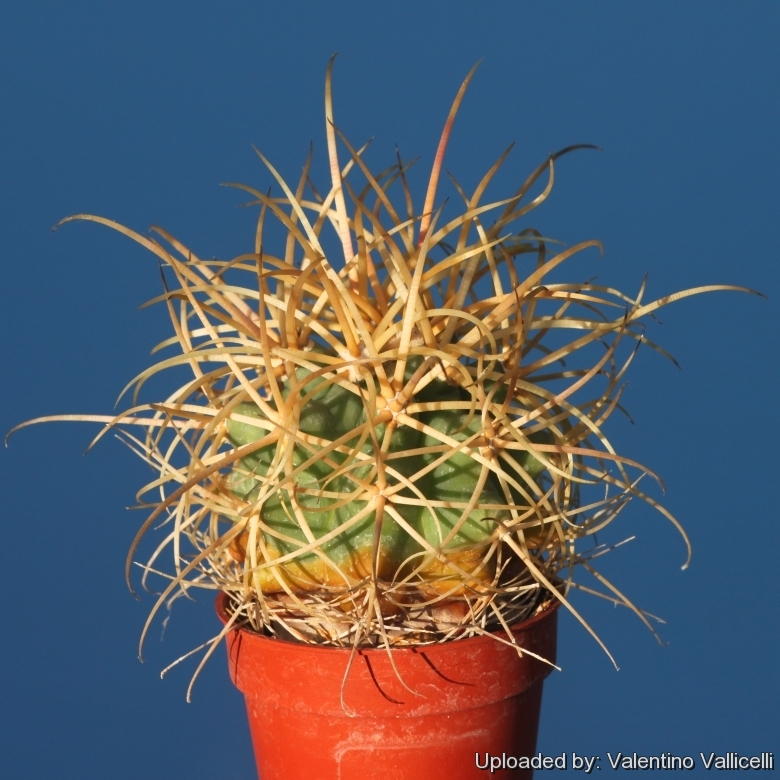 Description: Ferocactus rostii (a.k.a. Golden Spined Barrel Cactus) along with Ferocactus lecontei, and Ferocactus tortulispinus is one of the old controversial geographical forms of the variable Ferocactus cylindraceus = (Ferocactus acanthodes). Ferocactus rostii is closely set with interlocking spine clusters, which almost conceal the body of the plant and whitish to golden in maturity, it is similar to Ferocactus acanthodes, but the stem is thinner, taller and the spines are more curved. However it look very similar to other varieties of Ferocactus cylindraceus which are linked one to each others by populations of plants with intermediate characteristics. Nowadays all them are thought to belong to a unique polymorphic species. Such variations has led to establishment of several unnecessary names for this species.
Habit: It is a is a colourful barrel cactus usually unbranded, forming a slender tall column, although occasionally it forms a cluster of of 8 to 10 heads
Stem: Green, spherical becoming columnar up to 3 m tall and 30 cm in diameter.
Ribs: 16 to 22, rather low (hardly 1 cm high), obtuse, somewhat tubercled.
Areoles: Large, white-felted, closely set.
Spines: About 12, sometimes fewer, 3 or 4 central forming a crucifix shape, those on the lower part of the plant more or less spreading, those at or near the top erect, somewhat flexible, flattened, annulate, pungent, either straight or curved at apex, perhaps never hooked, usually yellow but sometimes reddish on young plants but also turning yellow in age.
Radial bristles: Sometimes wanting but when present 2 to 8, white or yellowish.
Flowers: Dark yellow at the crown of the plant, 4 to 6 cm in diameter.
Blooming season: Spring ( in habitat May and June).
Fruit: Fleshy, covered with scales, red, 5 cm long, 2,5 cm in diameter.
Remarks: The flowers on all subspecies are yellow, occasionally with a red tint.

Cultivation and Propagation: Ferocactus acanthodes var. rostii are summer-growing and pretty easy plants.
Growing rate: Thought slow to start they speed when they reach about five cm in diameter. Plants in good conditions will start to bloom when reach the diameter of only 15-18 cm.
Soil: They are suited for any rich, well drained soil such us clay, pumice, lava grit, and only a little peat or leaf-mould.
Repotting: If potted, repot them preferably in the spring, if their roots become cramped. Generally, they should be repotted every other year in order to provide fresh soil. However, this doesn't necessarily mean they'll need larger containers. Fill about a quarter of the pot with broken crocks, gravel, etc. to promote good drainage. After repotting, do not water for a week or more.
Watering: Water regularly during the aestival growth cycle (this plant need plenty of water, but do not overwater and let their soil dry out between waterings), and also needs to be avoided wetting the body of this plant while it is in sunlight. A wet cactus in the sun light can cause sun burning which can lead to scars or even fungal infections and death, keep rather dry in winter. No water should ever be allowed to stand around the roots.
Fertilization: Feed with a high potassium fertilizer in summer.
Exposure: Outside they need a bright exposure, full sun or half shade in summer if the location is exceedingly hot or bright, inside needs bright light, and some direct sun. It can tolerate moderate shade, and a plant that has been growing in shade should be slowly hardened off before placing it in full sun as the plant will be severely scorched if moved too suddenly from shade into sun.
Frost Tolerance: Light frost protection required for safe cultivation, but can tolerate sporadic light frost. This plants need a period of cool rest in winter to produce flowers abundantly.
Diseases and pests: Watch for infestations of mealybug, scale insects and spider mite.
Propagation: Seeds are the only way of reproducing. Seed Collecting: Permit fruit to ripen. Fruit must be significantly overripe before harvesting seed; clean and dry seeds.