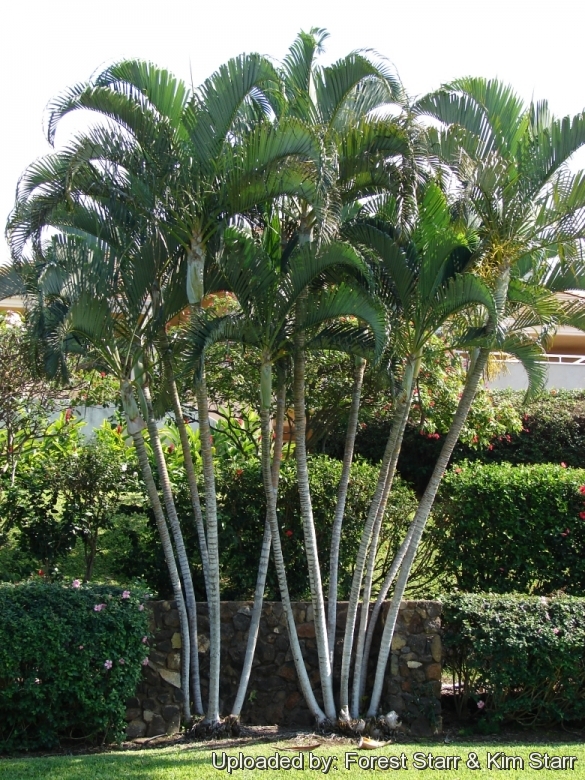 Origin and Habitat: Africa, Madagascar and adjacent islands, but widely cultivated in tropical landscapes around the world and is one of the most popular 'house plant' palm.
Habitat: This palm occurs naturally on the beachfront along the east coast of Madagascar in coastal forest on rocks and white sand, and inland along watercourses on river banks in tidal reaches of slow flowing rivers. That it can occur in an environment subject to drought and strong winds.
Ecology: In its introduced range, this plant acts as a supplier of fruit to some bird species which feed on it opportunistically, such as Pitangus sulphuratus, Coereba flaveola and Thraupis sayaca species in Brazil.

Description: It is a small to medium-sized multi-stemmed palm, growing to a height of 6 to 12 meters and topped with a gracefully spreading crown, although it is usually is much smaller. Often referred to as the 'areca palm' (though not in that genus).
Stems: It has multiple clustered non branching stems emerging from the base. They are bamboo-like, smooth and ringed with bases of old leaves, slightly above the ground, green colour in the newer growth areas and yellowish in the older areas; individual trunks less than l5 cm in diameter. The number of stems is also quite variable and can be controlled with pruning.
Leaves (fronds): It produces 6 to 8 leaves on long yellow petioles (hence the common name Yellow Cane) Leaves are spineless and pinnate, arched outward and downward, 2-3 m long, with 40-120 pairs of leaflets arranged in opposite pairs on the leaf stem in a shallow V; segments 30-70 cm long, to about 4 cm wide, tapering to a pointed, 2-cleﬁ apex; leaf bases forming a conspicuous, mostly yellowish crownshaﬁ (sometimes obscured by leaves).
Inflorescence/flower: Inflorescences (panicles ) up to1 m long, branched and emerging from the tops of the stems. The flowers are yellow, unisexual, with 3 sepals and 3 petals, borne in groups of 3 (I female and 2 male)
Bloom Time: Late Spring/Early Summer
Fruit: Yellow to purple, ellipsoid drupe (light olive green to yellow in early stages), about 2-2.5 cm in diameter the flesh coat over the seed is not edible.
Seed: About 2.5 in diameter, sandy brownish in colour with a vein-like texture
Remarks: The plant has different look in the tropics, tending to grow much more densely, and having a lot less yellow to the trunk and petioles. 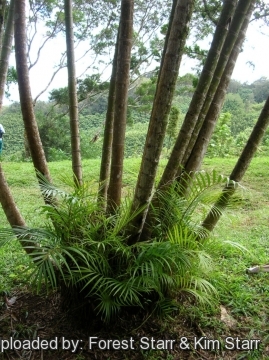 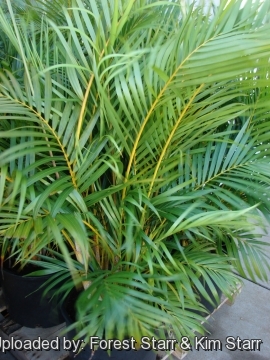 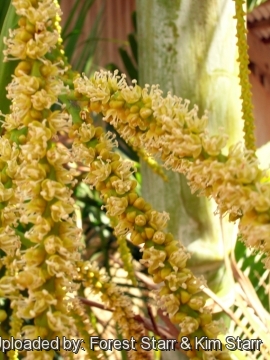 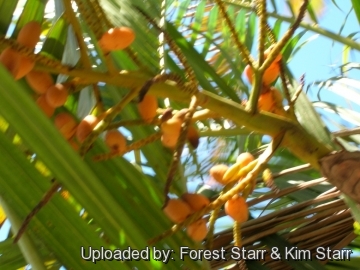 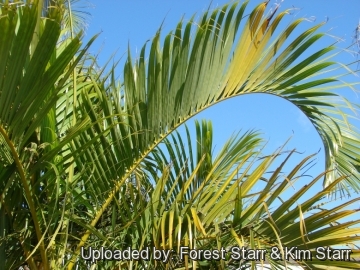 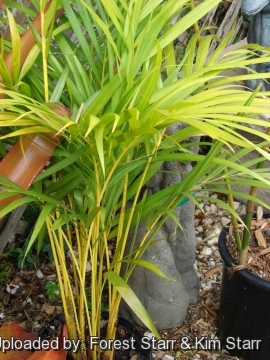 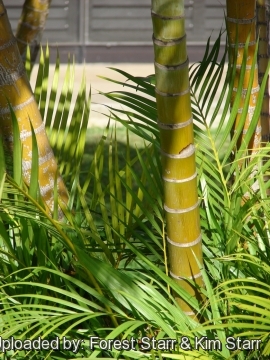 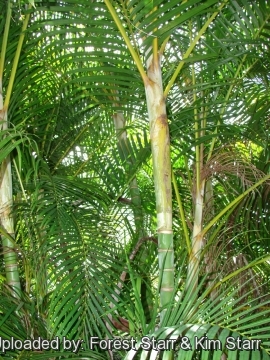 Cultivation and Propagation: This palm is an excellent relatively slow-growing garden plant adapt to different climates, from tropical to warm temperate Lives well under average home conditions with moderate maintenance.
Soil requirements: It prefers well-drained fertile, slightly acidic, soils except those that are constantly soggy. However it is widely adaptable and can even thrives in poor soils, but do better when grown in nutrient-rich soils with regular watering.
Watering: It prefers moist soils (not saturated). This palm a will tolerate occasional dryness if not prolonged. Don't let sit in water. This palm is extremely sensitive to salts and minerals, so if your home uses a water softener, use water from a source that does not go through the softener first, such as an outside faucet. As most tropical plants, an occasional misting will make your Areca Palm look and feel healthier.
Light: It adapts well to full sun, half sun and shade too, but looks its best in bright diffuse light (indoors or out). If put in too much direct light, the fronds may get burnt from the sunlight. When a frond becomes yellow or dead like in appearance, be sure to remove the entire frond. If home-grown, give some sun as with most tropical palms.
Fertilization: Need a perfect fertilizer diet including all micro nutrients and trace elements. It is subject to potassium deficiency.
Aerosol salt tolerance: It is moderately salt tolerant, but does a lot better inland then it does on the coast.
Hardiness: USDA Zones 10-12. Minimum Tolerated Temperature is about 1° C.
Wind hardiness: It can tolerate sweltering heat and windy conditions.
Aerosol salt tolerance: It is moderately tolerant to salt aerosolt, but does a lot better inland then it does on the coast.
Maintenance: Remove dried fronds.
Use: It is grown as an ornamental plant in gardens in tropical and subtropical regions, and elsewhere indoors. For its dense and clustering growth habit, primarily is used as a shrub, hedge or screen in subtropical or tropical landscapes. It also can be used as a specimen palm to show of its golden canes, especially if older leaves are pruned. This palm is also an effective “humidifier” a 1,80 m tall plant may transpire 1 litre of water per 24 hours, which is very good for removing indoor pollutants.
Disease & Pests: It is quite resistant to pests but may require regular fertilization to prevent yellowing caused by potassium deficiencies; protect against scale insects and frost and spider mites.
Propagation: Fresh seeds germinate within 2-6 months of being planted and the seedlings are attractive. If not properly treated, the seed does not have long shelf life. It produces offsets, and these can be cut off, when mature enough, as a propagation method. For propagation select sturdy, shapely, healthy plant free from insect and disease damage. New leaf growth is desirable.