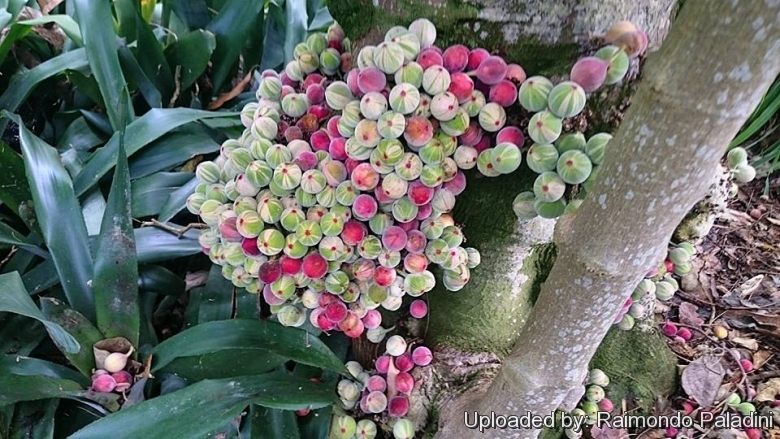 Description: The wild form of Ficus aspera is a deciduous or evergreen, non-strangling "sandpaper" fig from the islands of the southwest Pacific, that usually grows to 3-4 m tall and 6 wide, but occasionally to 20 m tall, with villous, 3 cm diameter twigs. This shrub or small tree has large, roughly oval, deep-green leaves that are extremely rough, with an harsh surface and with rather hairy undersides.
Variegated form: The variegated cultivar, also known as Ficus aspera f. parcellii or Clown Fig, has a highly variable mosaic of paler grey-green, cream, and dull pink, on dark green leaves and a name that commemorates its discoverer Henry Parcel, a Sydney gardener who collected it in the South Seas on an expedition in 1869-70. Variegation is caused by a virus. This plant produces continually small marble-size, figs that are variegated with pink and purple markings instead of orange-red. This is one of the most beautiful figs.
Branchlets: Green or pink, slightly hairy; terminal buds to 1 cm.
Leaves: Papery. marbled, speckled or dotted ivory white or cream on dark green, distichous, margin coarsely and irregularly toothed or entire, slightly rough to the touch above, hairy beneath, thin, strongly asymmetric, ovate to oblong-ovate to elliptic, to 32-35 cm long and 15-18 cm broad, obtusely subacuminate, base very oblique, asymmetrically cordate, on 1-2 cm long petioles, light green, variegated and speckled with white. Lateral veins 7-9, raised beneath.
Figs (syconiums): Many in leaf axils or on older wood, and produced on warty tubercles. Male and female flowers are small and formed inside the syconium. Figs are globose, pubescent, 1.8 cm, green, often striped with white or pink; stalks to 1 cm.

Subspecies, varieties, forms and cultivars of plants belonging to the Ficus aspera group 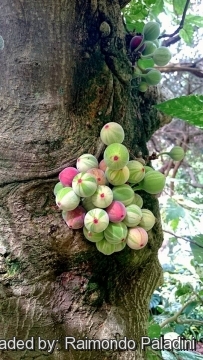 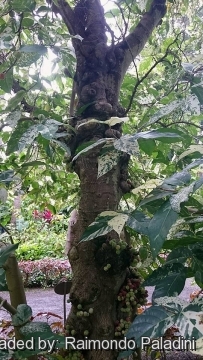 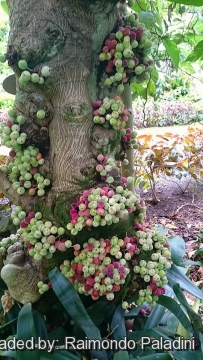 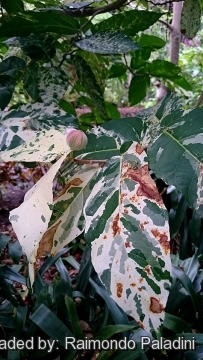 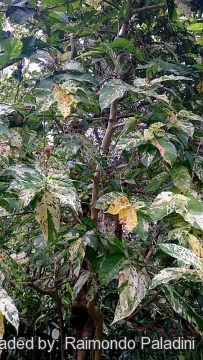 Cultivation and Propagation: Ficus aspera f. parcellii is a tropical species but can be cultivated in sub-temperate areas and is intolerant of frost. It is grown as a house plant in cool climates.
Exposure: It grows in full or partial sun, and indoors it need for bright light throughout the winteris a rare excepon in the fig group.
Soil: It needs well-drained, aerated soils.
Waterings: It is quite drought tolerant.
Salt tolerance: It can withstand salt spray.
Edible Parts and Uses: The ripe fruit is edible and is of local importance.
Hardiness: Overwinter at a minimum temperature of 18°c.Zones 11-12.