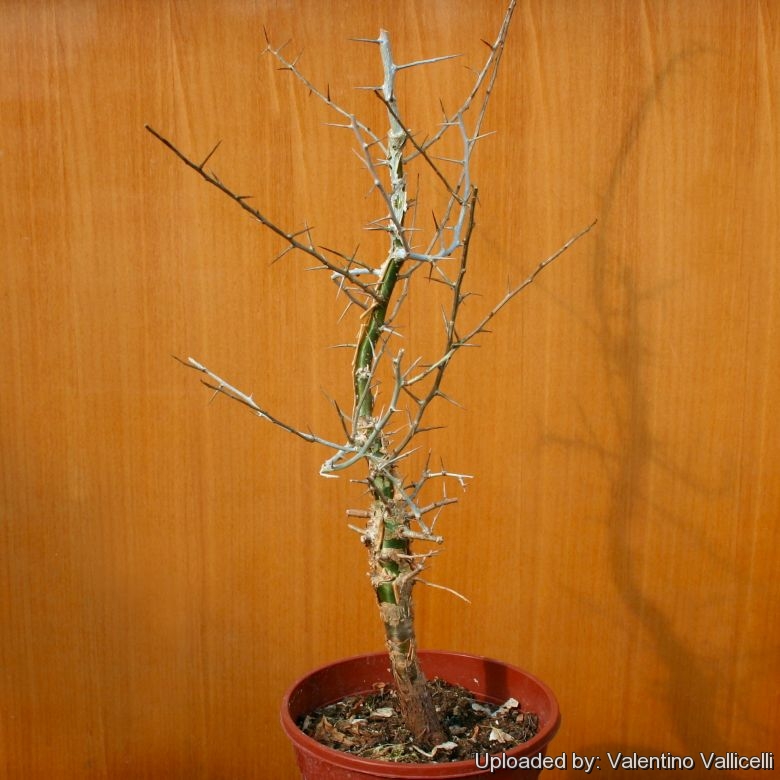 Balsamodendrum myrrha (Commiphora myrrha) Photo by: Valentino Vallicelli
This species as a nice thick stem, and the cut branches and nipped buds exude a wonderful fragrance that soon fills the room and lingers long. The sent remains on the fingers.

Description: It is a shrub or small pachycaul tree (to about 5 m tall) remarkable for its rather succulent, usually distinct short trunk, with an exceptional ability to retain its water content and withstand drought for long periods. It is characterized by numerous spreading stiff spiny twigs sparsely covered with small, irregular leaves. Commiphora myrrha is a very variable species. The different forms seem to merge so impercetibly that the recognition of infraspecific taxa is often difficult.
Stem: The trunk is swollen, flaky, thick, hairless throughout, it has peeling silvery, whitish, reddish or bluish grey papery-bark, the under-bark is green and photosynthetic, it produces knotted spiny branches, and branchlets that stand out at right-angles, ending in a sharp spine. The stem exudate a hardly scented, viscid, translucent yellowish gum-resin. The wood is yellowish-white.
Leaves: Small and single, or often 3-foliolate (pinnately compound) and alternately arranged. They are chartaceous, greyish green or glaucous, very variable in shape and size, sometimes very minute, they may be found on both short and long petioles (1-10 mm long). They may be elliptic, spathulate or lanceolate, attenuate, cuneate, rounded or truncate at the base, rounded or acute apically, 6-44 mm long, 3-20 mm wide, with 3-4 rather weak main veins somewhat tooth-letted at the apex, the lateral smooth, sometime with two tiny leaflets at the base of the main leaflet. The tree sheds its leaves in autumn. The leaves turn yellow before falling off..
Flowers: Tiny and inconspicuous, borne in more or less clustered panicles. All Commiphora species are dioecious. Male flowers usually precocious, 3-4 mm long
Fruit: Ovate, smooth, brown, 2-4 mm long, surrounded at base by a 4-toothed calyx, and supported on a very short stalk
Seed: Smooth with gentle swellings.

Notes: Botanically, there is still uncertainty about the origin and identity of the various species of commiphora. 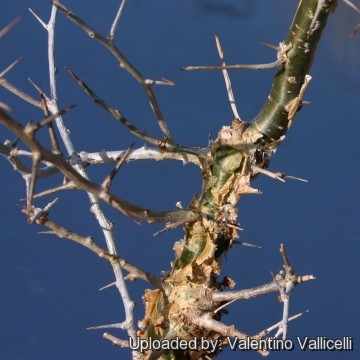 Cultivation and Propagation: The branches easily sprout roots and shoots and makes it a favorite bonsai species amongst bonsai enthusiasts. It is a vigorous grower but plants are sensitive to frost. Quite easily actually, and strangely enough, they are killed more from love than neglect. Over-watering in winter is probably the biggest cause of death with this species. They have very soft wood and if it receives too much water in the dry months can quite easily rot. It does not put out a deep taproot but develops a good network of smaller roots and can be planted in quite shallow pots. From a bonsai point of view, another very desirable feature of this species is its ability to heal from quite drastic surgery. Not only do the scars of a cut close over very quickly, the bark grows remarkably quickly as well, and it takes just a couple of years for it to cover all but the largest of scars, and even these will disappear before too long.
Propagation: By means of seed and cuttings.
Uses: Myrrh is a constituent of perfumes and incense, and was highly prized in ancient times. It is referred in the Bible as an ingredient in the holy oil of the Jews. Myrrh was used as a wine preservative in the ancient world. It was used by Egyptians in embalming mixtures (Kyphi). It was also used as an aromatic for perfumes, funerals, and insect repellents. Ancient Greek and Roman physicians used it to treat wounds, and prescribed it internally as a digestive aid and menstruation promoter. It was also used as a remedy for numerous infections, including leprosy and syphilis. Myrrh was an important trade item in ancient times. It is used today as an aid to repel tooth decay and gum disease.
The oleo-gum resin exudes from fissures or incisions in the bark as a pale yellow liquid, which dries into reddish-brown irregular masses or clumps of the size of a walnut. The commercial myrrh is said to be extracted from at least 10 different Commiphora species.