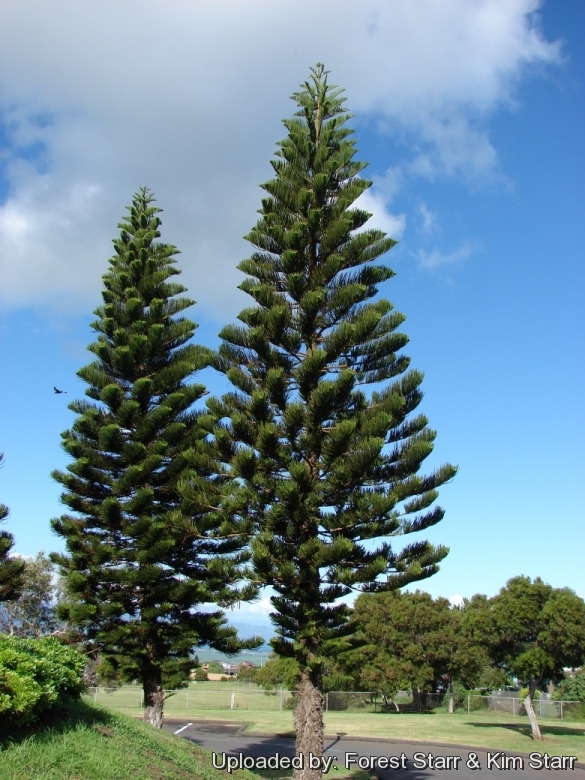 Origin and Habitat: Araucaria columnaris is endemic to New Caledonia (Ouinne to Prony & Isle of Pines), and Loyalty Islands in the southwestern Pacific, where it was first classified by botanists of Captain James Cook's second voyage of exploration. It is now widely cultivated as an ornamental tree and street tree in warm temperate climates in Queensland, northern New Zealand, southern California, Mexico, and Hawaii and sometime naturalized.
Altitude range: 0-50 metres above sea level.
Habitat and Ecology: Thisis the only New Caledonian species of Araucaria common along the more forested east coast and in the south, standing on low hills along the rockier shorelines and on the offshore islands on calcareous substrate although it is not restricted to these substrates. The powerful tap-root system gives this species an incontestable advantage in competition with other species on slopes exposed to strong winds. In the Loyalty Islands, Araucaria columnaris, besides benefiting from its special architecture, grows on sublittoral cliffs facing the prevailing winds. On the Isle of Pines it is often on coral. This species is not considered to be threatened due to its wide distribution and the vigorous regeneration in most populations.

Description: The New Caledonian pine, Araucaria columnaris, is a distinctive narrowly conical tree to 60 metres tall, with a slender, spire-like crown and look like unusually tall, thin Christmas trees but is more, commonly grown as a house-plant in pots.
Derivation of specific name: The New Caledonian Pine or Cook Pine (Araucaria columnaris, syn. A. cookii) was named in honour of Captain James Cook, who discovered it on the Isle of Pines on his second voyage. These trees are the most prominent floral features of New Caledonia and neighboring islands when viewed from the sea, and European mariners from Captain Cook onwards have been suitably impressed
Trunk: Slender, upright to slightly leaning. The bark is clear, peels off in thin paper-like sheets or strips and is rough, grey, and resinous.
Branches: Relatively short usually less than only two meters long, mostly in horizontal whorls around the trunk, lined with cord-like, horizontal branchlets, 9-10 mm in diameter, growing in one plane.
Leaves: The branchlets are covered with small, green, point-tipped, spirally arranged, overlapping leaves, characteristically curved toward the branchlet and covering it on all surfaces. The young leaves are needle-like, 4-7 mm long by 2-3 mm, while the broader adult leaves are triangular and scale-like, 5-7 mm long by 3-5 mm wide, apex incurved.
Female seed cones: Scaly, egg-shaped 10-15 cm long by 7-11 cm wide.
Male pollen cones: Produced at the tips of the branchlets, scaly, foxtail-shaped, and c. 5-10 cm long, 15-22 mm wide, with short bracts to 7 mm long, scales triangular, finely teethed, pollen sacs 10. Microsporophylls cuspidate.
Seeds: 3-3.5 cm long, nut ovate, wings broadly rounded.
Note: Often confused with the better-known Norfolk pine or Araucaria heterophylla, the New Caledonian pine Araucaria columnaris a.k.a. "candelabra" pine has a cylindrical profile whereas the Norfolk pine is conical (It does not help that for many decades, the scientific name Araucaria excela was misapplied to the Norfolk Island pine, and it is only more recent gardening books that set the record right by listing A. excelsa as a discarded synonym of the New Caledonian pine.) Adult forms of both these araucarias are not hard to distinguish, but when they are young both species have overlapping, needle-like juvenile foliage that is difficult to tell apart. The overlapping, triangular adult leaves of A. columnaris have a clear midrib which is missing or obscure in A. heterophylla leaves. Moreover the foliage of A. columnaris is more compact, less coarse and a darker green than that of A. heterophylla. 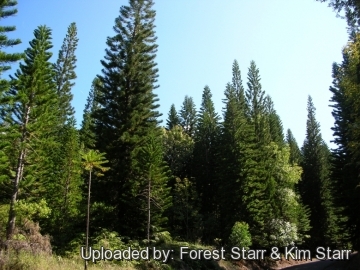 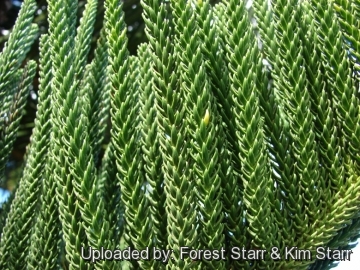 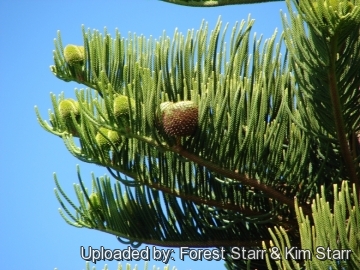 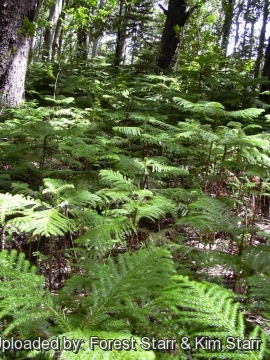 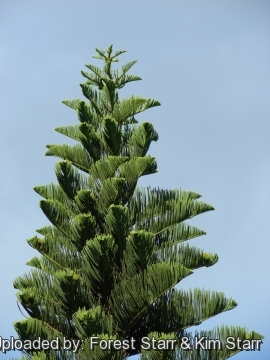 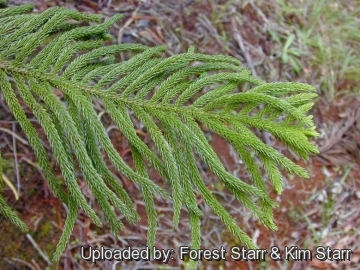 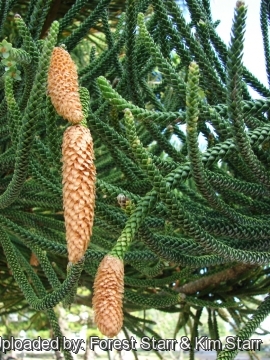 Cultivation and Propagation: Araucaria columnaris is among the most common Araucarias planted as an ornamental tree and street tree in warm temperate climates.