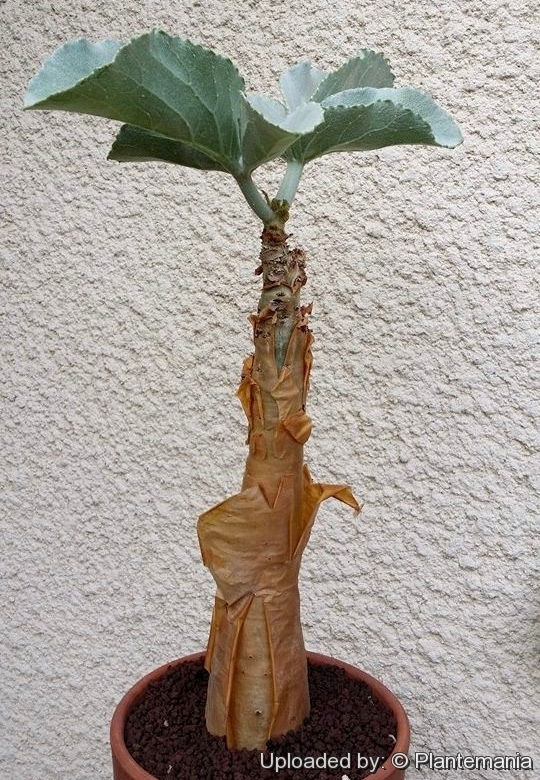 Origin and Habitat: Cyphostemma currorii grows in a vast area from southern Angola to north-western and west-central Namibia and is common on the Windhoek district and is most noteworthy on outcrops in the Karibib area as well as being common on the Brandberg. Most common on the north-central plateau. It is often localised.
Habitat and ecology: This species is found in hot, arid rocky outcrops, often growing on steep slopes. The foliage and fruit of this genus are rich in oxalic acid, so that the leaves are shunned by browsers, though the fruit is relished by baboons and monkeys. Cyphostemma currorii is potentially threatened by the pachycaul trade.

Description: Cyphostemma currorii is a perennial deciduous succulent-stemmed shrub or small tree with a bloated, water-storing, trunk with yellowish to orange bark, peeling off in paper-like flakes to expose a greenish underbark. The tree remember a dwarf baobab in shape and most often reaches a height 1-3 m high, but sometimes of 6 meters or more. It is for the most part of the year leafless but when leaves are present, they are large, divided into three segments and fleshy. It is hard to believe that Cyphostemma currorii belongs to the same family as grape (Vitaceae). The cream-coloured flowers and bright-green fruit are borne on long stalks and are reminiscent of its relationship to grapes. In the past this remarkable plant was known as Cissus, but it has been placed in the Cyphostemma genus because of the form of the flowers and leaves.
Derivation of specific name: This species was named after Andrew B. Curror, a Royal Navy surgeon, from the vessel HMS Waterwitch, who first collected specimens of the tree at Elephant's Bay in Angola in the 1840s - the genus Curroria Planch. is also after him.
Stem: Barrel-shaped, which can reach up to 5 m in height.
Leaves: Large, succulent, trifoliolate, with long petiole; bright green. Margin irregularly toothed, with incisions 1-3 mm deep and spaced at 2-10 mm intervals.
Flowers: Minute, yellowish-green.
Phenology: In habitat flowers have been recorded in October, December and March, but only on a few individuals each month. Fruits ripens from October to April, but most often in December. Leaves are present from October to May and the plants are bare from June to September, with young leaves in October to December.
Fruits: Red grape-like berries in clusters.
Similar plants: Cyphostemma currorii also called botterboom (butter tree) somewhat resemble the other botterboom Tylecodon paniculatus which, in contrast, is summer deciduous. This parallel trend is quite remarkable. 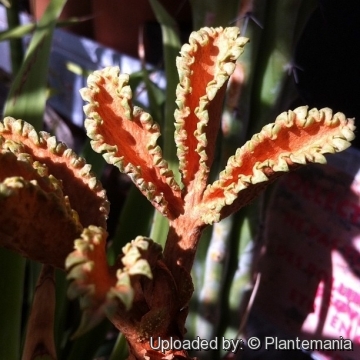 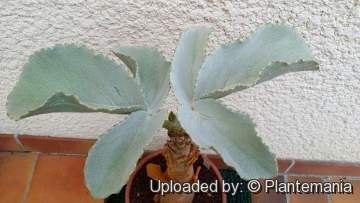 Cultivation and Propagation: Cyphostemma currorii is easy to grow, does well in the ground, and makes an impressive specimens, though fairly slow growing. It is also suited to greenhouse culture but do well out of doors in Mediterranean climate. It doesn't like the wet winter but will survive.
Soil: A fast-draining rich, well drained cactus mix should be used when potting. Outdoor plant it in a loamy or sandy soil where drainage is optimal.
Watering: It is drought tolerant, but it appreciates plentifully of water and some fertilizer during the summer growing season, but keep dry in winter in order to prevent rotting. As with all succulents one must be careful not to over-water. These plants can survive with very little water and too often plants die as a result of too much water. Despite coming from areas that are dry in winter, it can adapt to wet-winter areas like coastal California. If one lives in a very wet area, it is best to rather keep plants in big containers where they can be easily moved to a sheltered place.
Exposure: It like lots of sun throughout the year.
Hardiness: Mature plants are hardy to -3° C (or less), but it is best to avoid freezing temperatures especially if the plants are young. Cyphostemma comes from the hot, dry areas of southern Africa, so it has no problem taking temperatures up to 40° C; however, it may need some afternoon shade in hot climates to avoid leaf burn.
Garden uses: Cyphostemma are very sought-after plants for the garden, as are other caudiciform plants such as baobabs, adeniums and tylecodons. They make superb container or open garden subjects in and around the garden, especially around swimming pools and courtyards. They are ideal accent plants for a rockery, or may be planted in a large container on a sunny protected patio.
Other uses: The berries contain oxalic-acid crystals which cause extreme irritation of the mouth and throat if eaten. The outer, papery pieces of bark are used to carry honeycombs. The sap is used to cure mange in livestock and skin diseases in people. Of great horticultural importance for dry gardens as it grows well from seeds or cuttings. Of considerable interest to specialist pachycaul collectors, with a potential export market.
Propagation: Propagate usually from seed that must be prepared, aged and scarified and even then germination is uncertain or by cuttings. Plant seeds in winter 1-2 cm deep in moist, sterile soil. Keep soil temperature consistent at 20-30° C, with some day/variation in this range. Cool soils will significantly delay seed germination time if not inhibit germination altogether. Because seeds need a very long time for germination, take care to use sterile soil, do not re-use soil that was used for other plantings. It is also recommended seeds be germinated in a high humidity environment so constant watering is not necessary. Either germinate seeds in a greenhouse or make a temporary "greenhouse" by covering containers with plastic wrap, or by putting containers inside a ziplock bag. Monitor for fungal growth and air out if/when necessary. Germination tends to be slow and erratic. 6-12 months, sometimes up to 24 months. Propagation can also be undertaken by means of cuttings. Cuttings or truncheons can be made in coarse river sand. Again it is important to water with caution especially when cuttings have rooted.
Warning: The grape-like berries are very decorative but unlike the edible grape they are poisonous.