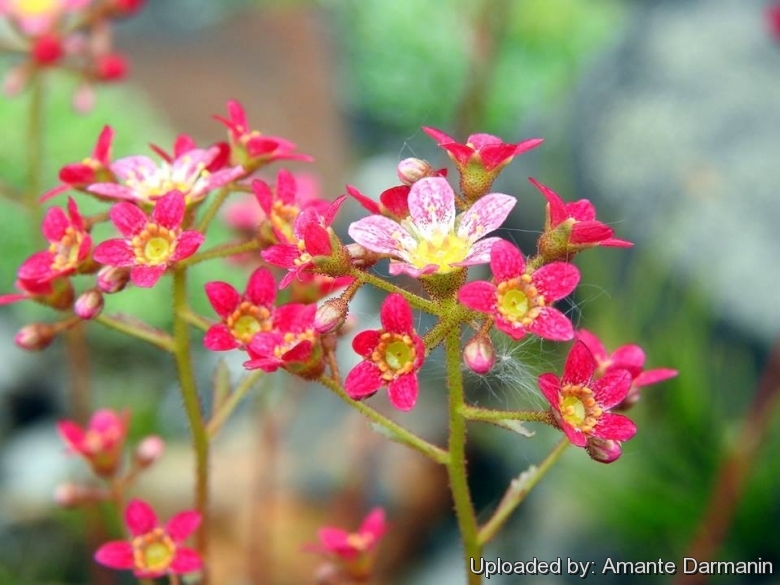 Origin and Habitat: Saxifraga paniculata subs. cartilaginea is a geographically distinct subspecies endemic to the Caucasus. Do intermediates exist in the wild? Further fieldwork and study are needed to establish the appropriate ranking.

Description: Saxifraga paniculata subs. cartilaginea is is a very distinct eastern form of Saxifraga paniculata (Saxifraga aizoon), from the Caucasus. In the past this has also been given specific rank. It is a perennial plants that spreads by means of buds placed at ground level and with leaves arranged in basal rosette all branching from a central root system. It has sharply pointed, foliage with a prominent cartilaginous margin (hence the specific name) and small teeth. They are commonly glaucous and do not curve inwards but are straight and ascending. Rosette size is variable, with leaves from 10 nun to 50 mm. The flower colour is commonly white. Clearly there are some similarities with S. paniculata Miller, but there are also significant differences. There is also a pink-flowered variety known as Saxifraga kolenatiana, which is indeed very closely related (if not the same).
Leaves: Ending in a fine point, with toothed, cartilaginous margins and scarcely encrusted.
Inflorescence: Flowering stem simple racemose 6-20(-25) cm tall, leafy, glabrous, peduncles glandular-hairy.
Flowers: Calyx glabrous, obtuse, corolla white, but pink and even red flowered colonies are documented (Saxifraga kolenatiana), petals 5-6 mm long.

Subspecies, varieties, forms and cultivars of plants belonging to the Saxifraga paniculata group

Cultivation and Propagation: Saxifraga paniculata subs. cartilaginea is forms a very compact and quite slow-growing cushion. Grow it in a half shady calcareous raised beds or among rocks, but not too dry. They are not as easy as most of the other S. paniculata forms. It is somewhat uncommon in gardens.