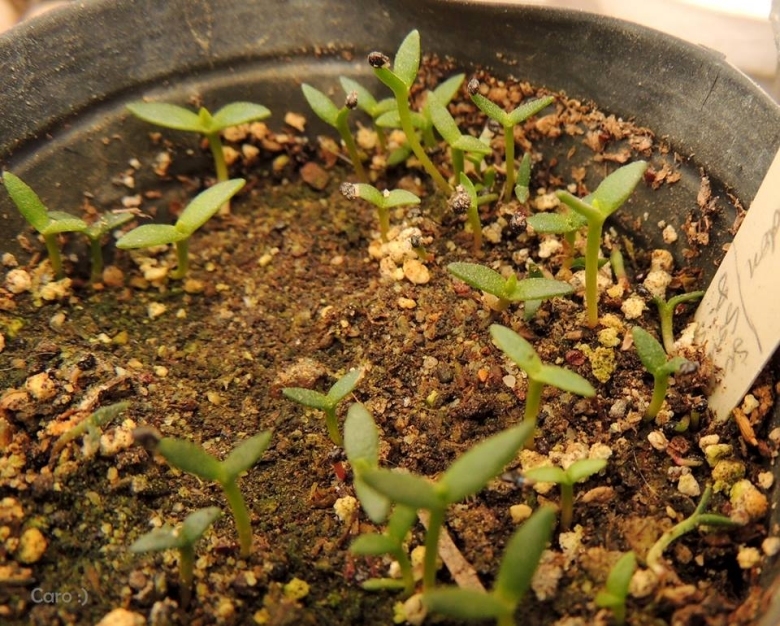 Description: Lewisia cotyledon is a species of flowering plant in the purslane family known by the common names Siskiyou lewisia and cliff maids. It is a perennial with thickened roots and heavy caudex 1-2 cm thick. Three variety are recognized, the nominate form, var. howellii (S.Watson) Jeps. and var. heckneri (C.V.Morton) Munz and occasionally occur together. It is one of the most adaptable species, and a number of horticultural forms have been developed by American, Scotch, and English horticulturists and have long been popular pot and rock garden plants, along with the natural varieties. All are characterized by thick, fleshy, evergreen leaves often with curled or undulate margins that produces a basal rosette. Flowers are produced on branched panicles that are held above the leaves and bear a wealth of blossoms in white with red mid-veins, or in shades of pink, rose, crimson, and cherry red. The open funnel-shaped flower has 7 to 13 petals, each about 1.5 centimeters long Natural hybrids with Lewisia leeana are known.
Caudex: Short with elongate fleshy tap root.
Leaves: Basal, many, flatly spreading in lax to dense rosettes to 30 cm in diameter, (3-)3.5-11(-14) cm long, spatulate to oblanceolate, or rarely almost linear or orbicular, evergreen, sessile or abruptly or gradually narrowed into a broad petiole, thick, fleshy and flat. Margins entire to undulate, sometimes apiculate at the apex, but little crisped, petiole broadened at the base.
Stems: Several, 6-30 cm. high with 2-4 alternate or opposite toothed bracts below the inflorescence.
Inflorescence: One or more per rosette, short-paniculate, ascending to suberect, 10 - 12 (-30) cm tall, branches subtended by toothed glandular bracts. Cymes, 10 -50 flowered.
Flowers: Many, short-petioled; sepals 5-6 mm long, 3.5-6 mm. broad, many-nerved, obtuse to truncate, each nerve ending with a dark gland-tipped tooth; petals 8-10, white tinged with rose or salmon turning rose with age, obovate to spatulate, 12-15 mm. Long. Stamens 5-8(-12), shorter than the petals, slightly united at the bas. Styles 2 - 4; ovules 13-20.
Blooming season (in habitat): April-May.
Fruit (capsule): Narrowly oblong or ovoid, 3-6 mm long.
Seeds: 4-15, dark, shining c. 1.5 mm in diameter.
Chromosome number: n=14

Subspecies, varieties, forms and cultivars of plants belonging to the Lewisia cotyledon group

Cultivation and Propagation: Lewisia cotyledon and its varieties remain evergreen throughout the year. Lewisias are not for the ordinary garden border, but should be used on rock walls, rock gardens, sharply drained slopes with morning sun, or in containers.
Soil: Fine gravel, coarse sand or granite grit should be mixed in with the soil at planting time. The most critical requirement for successfully growing Lewisias is near-perfect drainage around the plant's crown to prevent rot during the winter months.
Exposure. They should be grown in full sun.
Watering: If watered regularly, many hybrids will bloom two to four times during the growing season. Protect from winter moisture.
Hardinesss Lewisias prefer cooler climates, but can be grown in warmer areas if they are planted in light shade. Hardy in USDA zones 6-10
Fertilization: Feed monthly during the growing season using ½ strength, all-purpose fertilizer.
Propagation: Lewisias may be propagated from seeds that require no pretreatment, but may be a bit slow to germinate. The more popular method of propagation is to remove a section, or to take cuttings from the thick caudex in spring or early summer. If the section has a few roots, it can be potted immediately and kept watered and shaded until thoroughly established. A cut piece with no roots can be dipped into a rooting hormone, and put into clean, sharp sand until a root system has formed. The new plant may flower the following year, or take up to two years. A potting mixture of equal parts of coarse sand and screened leaf mold will provide food and good drainage.